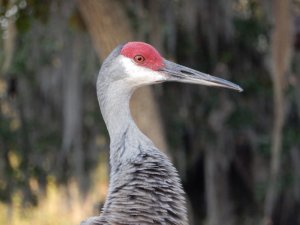 Happy Earth Day! The theme this year is Restore Our Earth. Although NEON does not do direct conservation or restoration work, many of our field sites are hosted by or colocated with organizations that do. The data NEON collects at these sites provide a window into how ecosystems are changing and the impact of restoration efforts.

A number of the NEON field sites are located on land set aside for preservation, restoration, and conversation. Our site hosts include The Nature Conservatory, U.S. Forest Service, U.S. Fish and Wildlife Service, the National Park Service, state Departments of Natural Resources, and other organizations involved in protecting or restoring natural habitats. For Earth Day this year, we're highlighting just a few!

Guánica Forest (GUAN), in D04 (Atlantic Neotropical), is hosted by the Commonwealth of Puerto Rico's Department of Natural and Environmental Resources in the Guanica Dry Forest Reserve. It is one of the most extensive remaining examples of pristine dry tropical forest on Earth. The land was set aside for preservation in 1930 and designated as a Biosphere Reserve by the United Nations in 1981. 136 species of birds have been documented here, including the endangered Puerto Rican Nightjar.

The Pu'u Maka'ala Natural Area Reserve (PUUM), in D20 (Pacific Tropical), is a protected habitat managed by the Hawai'i Department of Land and Natural Resources Division of Forestry and Wildlife (DLNR-DOFAW). Located high on the sides of Mauna Loa on the "Big Island" of Hawai'i, the Pu'u Maka'ala reserve is home to many threatened or endangered species of plants and animals. The reserve is particularly important for preservation of the wet 'ōhi'a and koa forests that provide habitat for endangered bird species such as the 'akiapōlā'au honeycreeper and the 'alalā, a nearly extinct Hawaiian crow that was recently reintroduced into the wild here. The DLNR-DOFAW engages in a variety of preservation, restoration, and reforesting programs as part of Hawai'i's Plant Extinction Prevention (PEP) program.

The Jones Center at Ichauway, Georgia

The Joseph Jones Ecological Research Center (JERC)—now called the Jones Center at Ichauway—is part of D03 (Southeast). The reserve is privately owned and managed by the Robert W. Woodruff Foundation. Originally maintained a quail hunting habitat by Woodruff, the longtime head of the Coca-Cola company, the reserve is now noted for protecting one of the region's most extensive remaining tracts of longleaf pine and wiregrass habitat. The facility supports a range of research and conservation efforts, including a prescribed fire regimen. In addition to bobwhite quail, the habitat hosts numerous endangered and threatened bird, reptile, and amphibian species including the red-cockaded woodpecker, Florida pine snake, and gopher frog.

The Disney Wilderness Preserve (DSNY), also part of D03, is hosted by The Nature Conservancy (TNC) on a 12,000-acre preserve at the headwaters of the Everglades ecosystem in south-central Florida. The preserve was established in 1992 with 8,400 acres of land donated to TNC by The Walt Disney Company and later expanded with other land grants. TNC has engaged in extensive wetland restoration and a prescribed fire regimen to restore native forest habitat. The Disney Wilderness Preserve is now recognized as one of the premier conservation sites in the state. The site is home to more than 80 species of reptiles and amphibians and more than 200 species of birds, including the bald eagle, sandhill crane, and a small population of the endemic Florida scrub-jay.

The NEON site at Great Smoky Mountains National Park (GRSM) is one of several sites hosted by the National Park Service. Our nation's most visited national park, it lies on the border of Tennessee and North Carolina in D07 (Appalachians and Cumberland Plateau). It is considered to be one of the most biodiverse areas in the U.S., with more than 19,000 documented plant and animal species, including 1000 that have not been documented anywhere else in the world. The National Park Service (NPS) engages in a variety of preservation and restoration activities throughout the park, including reintroduction of previously extirpated species such as the peregrine falcon, river otter, and elk.

The NEON site at Yellowstone National Park (YELL), in D12 (Northern Rockies), is part of the Greater Yellowstone Ecosystem (GYE), one of the world's largest nearly-intact temperate zone ecosystems. It is also part of the Yellowstone to Yukon Conservation Initiative, which creates a protected corridor for wildlife migration. Yellowstone is the oldest U.S. national park, originally set aside for preservation in 1872 and turned over to the newly formed National Park Service in 1918. NPS actively manages the park for habitat preservation and endangered species protection. Yellowstone is host to one of the most famous conservation and restoration programs in the U.S. – the reintroduction of grey wolves to the park in the 1990s.

The Arikaree River (ARIK), part of D10 (Central Plains), flows through the plains of northeastern Colorado. The NEON sampling reach of the river is located on land managed by The Nature Conservancy as part of Fox Ranch. While part of the land is maintained as an active cattle ranch, it is managed to ensure preservation of a diverse tallgrass prairie habitat. The river is home to rare fishes and amphibians like the orange-throated darter and the plains leopard frog. It is believed to be Colorado's last intact example of a mostly free-flowing plains river. The preserve also hosts numerous endemic and migratory bird species, including Bell's vireo, the burrowing owl, the lark bunting, the upland sandpiper, and the ferruginous hawk.

The Woodworth (WOOD) terrestrial site and Prairie Pothole (PRPO) aquatic site are both located at the Chase Lake National Wildlife Refuge in D09 (Northern Plains). Chase Lake was established in 1908 as a waterfowl and game bird refuge, making it one of the oldest nature preserves in the U.S. Chase Lake and the surrounding wetlands (called prairie potholes) are prime breeding ground for waterfowl and other migratory birds, which flock to the area by the tens of thousands. The lake is at the center of one of the largest undeveloped tracts of native mixed-grass prairie in the Upper Great Plains and contains a plant community unique to this region. The preserve is also notable for hosting some 30,000 breeding American white pelicans annually. The pelicans are an exceptional conservation success story; in 1908, before the preserve was set aside, uncontrolled hunting had reduced the population to just 50. Now, they are an iconic sight at Chase Lake during the breeding season.

NEON sites at Talladega National Forest (TALL) and Mayfield Creek (MAYF) are colocated in the Oakmulgee District of the Talladega National Forest in west-central Alabama, part of D08 (Ozarks Complex). This is one of the most biodiverse regions of the country. The national forest was established by President Roosevelt in 1936 and is managed by the National Forest Service for logging as well as ecosystem preservation and restoration. Conservation activities include restoration of longleaf pine forest in the Oakmulgee District. The Oakmulgee is home to Alabama's largest population of endangered red-cockaded woodpeckers, a key indicator species for longleaf forest habitats.

NEON's Rocky Mountain National Park site (RMNP) is hosted on land owned by (but not contiguous with) Rocky Mountain National Park in Colorado, with distributed field sites located within the Roosevelt National Forest on land managed by the National Forest Service. The site is part of D10 (Central Plains), although it is physically located within the borders of D13 (Southern Rockies & Colorado Plateau). Rocky Mountain National Park was established in 1915 to preserve the abundant natural resources found here. The park is much beloved and attracts tens of thousands of visitors each year, but large expanses are set aside for natural conservation and wildlife preservation. Roosevelt National Forest also has designated wilderness preservation areas. A diverse range of alpine and subalpine species are found here, including moose, elk, mountain lions, pika, yellow-bellied marmot, and snowshoe hare.