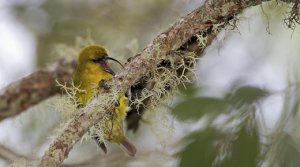 High on the flanks of Mauna Loa, on the "Big Island" of Hawai‘i, you'll find a lush landscape of native ‘ōhi‘a and koa forests, giant hāpu‘u pulu ferns and wet grasslands. If you're lucky, you may spot an endangered ‘akiapōlā‘au honeycreeper or even the ‘alalā, a nearly extinct Hawaiian crow that was recently reintroduced into the wild here.

This is the Pu‘u Maka‘ala Natural Area Reserve (NAR), a protected habitat just north of Hawai‘i Volcanoes National Park. It is also the location of NEON’s PUUM field site.

PUUM will be the final NEON field site to transition from construction to operations this spring. The site is already collecting instrument and field sampling data and will become fully operation in late May. It joins monitoring and conservation efforts already underway in this unique pacific tropical ecosystem. NEON data will support these efforts and give researchers new insight into how the climate and ecosystem are changing in the mountains of Hawai‘i.

Ecology in "The Extinction Capital of the World"

The Hawaiian Islands are among the most isolated lands on Earth, 2,390 miles from California and 3,850 miles from Japan. This geographic isolation has given the islands some of the most distinctive ecosystems in the world. The pacific tropical climate here supports tremendous biodiversity, with tropical rainforests and wet grasslands full of species that are found nowhere else. More than 90% of Hawai‘i's native species are endemic to the islands.

This makes Hawai‘i a wonderful place to live, visit or study. But the ecosystems that support these unique and irreplaceable species are also uniquely vulnerable to changing climate, invasive species and habitat destruction. This is why the islands are known as "the extinction capital of the world." While the state of Hawai‘i makes up just 0.25% of the landmass of the Unites States, the islands are home to 25% of the country's endangered species.

The endemic birds of Hawai‘i have been especially impacted. Hawai‘i holds the record for the greatest number of extinct bird species in the world. Many of Hawai‘i's native birds are flightless or nest on the ground because they had no natural predators on the islands. The introduction of rats, domestic cats and other non-native predators by humans has been devastating for many of Hawai‘i's birds. Humans are also responsible for the feral pig population that destroys nesting habitats as well as the mosquitos that carry avian diseases. In addition, agriculture and human settlement have resulted in the loss of native habitat for endangered birds.

The Pu‘u Maka‘ala NAR is one of 21 reserves established by the Hawai‘i Department of Land and Natural Resources Division of Forestry and Wildlife (DLNR-DOFAW) to protect vulnerable ecosystems and native species. It is home to more endangered bird species than any other managed area in Hawai‘i.

Alex Wang is one of the researchers working to monitor and protect endangered birds at Pu‘u Maka‘ala. He is the Endangered Bird Field Supervisor for the Hawai‘i Natural Area Reserve System (NARS) and is employed through the Pacific Cooperative Studies Unit (PCSU) of the University of Hawai‘i. His team conducts an annual bird survey on eight reserves, including Pu‘u Maka‘ala, to track the population size and range of endangered species.

Currently, much of his research focuses on the ‘akiapōlā‘au, a tiny honeycreeper with a distinctive specialized bill. Sometimes called the "Swiss army knife bird," the ‘akiapōlā‘au has a short lower mandible that allows them to drill into trees like a woodpecker and a long, curved upper mandible to scoop out insects. They are critically endangered and found only in the koa and ‘ōhi‘a forests in the upper elevations of the Big Island. "There are so many basic questions we have about these birds," Alex says. "How many birds are there in the NAR? How far do they travel? When is their breeding season?"

DLNR-DOFAW has been working to restore forestland in the Pu‘u Maka‘ala NAR. Parts of the NAR were once owned by the state prison system and used for cattle grazing. Over the last decade, DLNR-DOFAW has replanted thousands of koa trees in and around the NAR and installed fencing to keep feral pigs from destroying young trees and understory vegetation. Alex's ongoing work will monitor the impact that this habitat expansion and protection has on the population of critically endangered birds. "We hope to see a doubling of the population of ‘akiapōlā‘au in the NAR as a result of the tree planting and predator control measures," he says.

In addition to bird banding, Alex and his team are now tracking the ‘akiapōlā‘au with radio telemetry. Radio tags attached with tiny harnesses allow researchers to identify individual birds and track their movements. Antennae attached to radio towers in and around the NAR pick up signals from the tags. One of these antennae is attached near the top of the NEON flux tower, more than 100 feet above the forest floor. The height provided by the NEON tower will greatly expand the antenna's range.

Pu‘u Maka‘ala is also home to another critically endangered species: the ‘alalā, or Hawaiian crow. This small corvid was declared extinct in the wild in 2004. In 2017, conservationists released a small population in the Pu‘u Maka‘ala NAR. The birds have not yet successfully reproduced, but are just now coming into breeding age. "It will be exciting to watch them over the next few years," Alex says.

The NEON Project at Pu`u Maka`ala

Placing a NEON field site in the NAR will generate a wealth of ecological data to complement the other fieldwork already being conducted. These data will enable long-term monitoring of changes in climate, vegetation growth patterns, insect populations, bacterial activity and other variables that impact the Pu‘u Maka‘ala ecosystem. Data collection systems include automated instruments, observational field sampling and airborne remote sensing surveys.

Alex is especially interested in the mosquito data collected by the NEON project. Mosquitos are not a native Hawaiian species, but have been introduced via human migration and international shipping. As temperatures rise due to climate change, their populations may grow in high altitude ecosystems like Pu‘u Maka‘ala. Mosquitos are a potential vector for avian diseases that could threaten some of Pu‘u Maka‘ala's endangered bird species.

Mike Long, the Field Operations Manager for the NEON Pacific Tropical domain, is excited to see the site move to full operations. "This has been a long time coming," he says. “I have to praise the NARS staff, the USDA Forest Service Institute of Pacific Islands Forestry, and the many others who worked so hard to make NEON a reality in Hawai‘i.”

Now, the site is ready to produce data to benefit land managers, researchers and the public. "Pu‘u Maka‘ala is simply beautiful," Mike says. "The native ecosystems of the Hawaiian Islands have incredible ecological and cultural value. We are thrilled to be able to provide in-depth data to support important conservation efforts here and elsewhere across the islands.”