Weather and climate conditions along with seasonally changing biological and biogeochemical processes are important drivers and indicators of terrestrial and aquatic ecosystem function. Meteorological measurements across the world provide valuable data that our weather and flood forecasts depend on.

The meteorological measurements at terrestrial and aquatic sites are grouped into instrument assemblies, which are introduced in the following. Metzger et al. (2019) provide additional information.

The eddy-covariance (EC) turbulent exchange assembly aims to maximize data coverage and quality through close integration of a suite of sensors and auxiliary components. The three-dimensional wind components at the tower top are measured by a sonic anemometer operating at a rate of 20 Hz. An attitude and heading reference system is attached to the sonic anemometer and includes a gyroscope, accelerometer, and magnetometer that collect data at a rate of 40 Hz. This allows rotated deployment of the sonic anemometer following the streamlines at sloped sites and makes it possible to quantify and correct residual boom and tower motions. The H2O and CO2 concentrations are measured at 20 Hz by an enclosed-path infrared gas analyzer in combination with a mass flow controller that ensures a flow rate of 12 standard liters per minute through the sampling cell (Metzger et al., 2016). Last, a validation system supplies reference gas concentrations to the infrared gas analyzer every 23.5 hours for periodic validation to quantify and correct sensor drift.

The EC storage exchange assembly consists of a suite of sensors that record air temperature and CO2 and H2O concentration vertical profiles for the calculation of corresponding storage fluxes (Xu et al., 2019). Air temperature is measured at a rate of 1 Hz using triple-redundant aspirated platinum resistance thermometers at the tower top, and single aspirated platinum resistance thermometers at the remaining vertical profile levels. To measure CO2 and H2O concentrations at a rate of 1 Hz, an infrared gas analyzer is located in the instrument hut. During sampling mode, the infrared gas analyzer cycles through air samples that are drawn from each vertical profile level on the tower. The site-specific flow rate of 5–11 standard liters per minute is controlled to maintain the sample line pressure at 40%–50% of the ambient pressure to prevent condensation. During the field validation mode, reference gas concentrations are supplied to the infrared gas analyzer, similar to the EC turbulent exchange assembly.

The atmospheric composition assembly comprises a suite of sensors that further characterize wet deposition, atmospheric isotopes, and particulate matter. Gaseous-phase stable carbon and water isotopes are measured along the flux tower vertical profile of all terrestrial sites. Wet deposition including stable isotope sampling occurs at the flux tower top across 37 terrestrial sites, which were selected to represent a range of concentrations of nitrate, ammonium, and sulfate. Particulate matter less than or equal to 10 µm in the atmosphere are monitored via PM10 sampling and continuous particle size monitoring at a transect across the Rocky Mountains consisting of six sites. Aerosol optical depth measurements at the tower top complete the atmospheric composition assembly.

The soil assembly includes five soil plots containing a suite of meteorological sensors including photosynthetically active radiation, net radiation, infrared biological temperature, relative humidity and throughfall precipitation. The plots are typically arranged along a transect within the zone of mutual representativeness (see “Flux Tower” section below) in the locally dominant (~1-km2 scale) soil type. Spacing between soil plots was determined by assessing spatial variation in soil temperature and moisture over 1 ha (Loescher et al. 2014) to maximize spatial independence, while being limited to ≤40 m spatial separation because of cost constraints. Vertical profiles of soil temperature (nine or fewer sensors per plot), moisture (eight or fewer sensors per plot), and CO2 concentration (three sensors per plot) are measured in each plot, with measurement depths based on absolute soil depth, soil horizon thicknesses, and other soil properties. Soil heat flux is measured 8 cm below the soil surface in three of the soil plots. All soil sensor measurements are made at 0.1 Hz. Additional information on soil measurements is available on the Soil Sensors webpage.

Sensor-specific details can be found in the data product documentation on the NEON data portal. 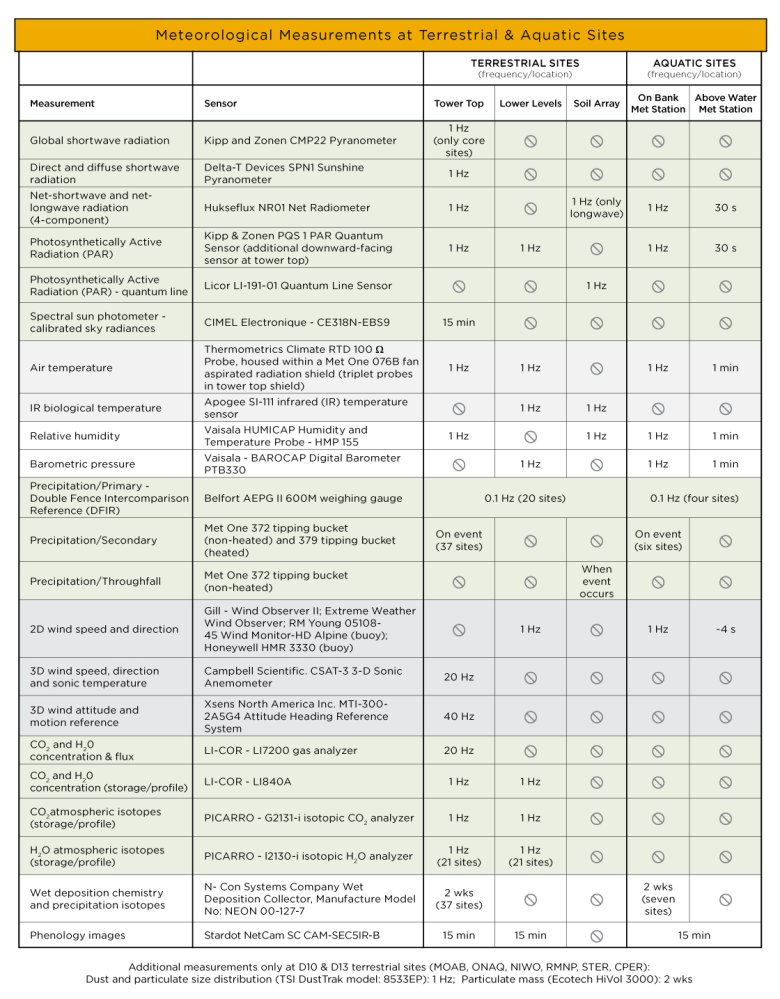 Aquatic site meteorological stations measure 3m tall and are situated on or near riparian areas. Additionally, NEON deploys platform buoys with meteorological instrumentation at lake and large river sites. Due to power, space, and data storage constraints on the buoy, the configuration of sensors deployed on a buoy may be different than those in other parts of NEON. In addition to measuring PAR at water surface from the buoy on lakes and rivers, lakes and wadeable stream sites also measure PAR at water surface using in-water infrastructure, including the littoral zone in lakes. Some aquatic sites do not include precipitation measurements if a terrestrial site with a precipitation gauge is nearby.

At lake and river sites, above-water conditions can be different from riparian conditions due to the increased width of open water which results in increases in light exposure and decreased shading from riparian vegetation. Water turbulence also naturally decreases with stream size. As a result, wind speed and barometric pressure begin to dominate gas exchange (e.g. dissolved oxygen) at the water surface in larger rivers. NEON installs an above-water meteorological station at lake and river sites to collect the same data collected at riparian meteorological stations, listed above. Lake and river buoys also collect below-water PAR.

The above-water meteorological station is also placed in close proximity to in situ surface water sensors and where field staff collect water samples for biogeochemical measurements. Due to power and communication limitations, buoy data are collected less frequently than riparian met station data.

Heat, water vapor, carbon dioxide, and other gases are continually exchanged between the Earth’s surface and the atmosphere. Soil, vegetation, and other living things on the Earth absorb energy from the sun and take in gases and water from the atmosphere, directly or through precipitation. They also radiate heat, send water back into the atmosphere through evapotranspiration, and release carbon and other gases back into the air through respiration. In a very real way, we can think of these fluxes as the planet breathing. To monitor this exchange at the boundary layer between living and nonliving things on the Earth and the atmosphere above, NEON collects eddy-covariance (EC) flux data alongside meteorological and atmospheric composition data at each terrestrial field site.

EC data are collected using sensors that measure temperature, moisture and gas concentrations within the turbulent air currents that move past a flux tower. By combining these data with information about the speed and direction of the air currents themselves, we can get a picture of how energy, water and gases are flowing into and out of the atmospheric boundary layer. There are also other networks collecting comparable flux data in the U.S. and internationally, including AmeriFlux, FLUXNET, ICOS and TERN. NEON represents the largest single-provider EC tower network globally, and greatly expands the number of geographic areas and types of ecosystems where these data are being collected.

Through a quantitative, footprint-based framework of mutual representativeness and exclusion, flux tower measurements are collocated with NEON’s terrestrial observation system, airborne observation platform, aquatic instrument system, and aquatic observation system (Metzger et al., 2019). This allows direct integration with and extrapolation between these types of measurements. For example, meteorological measurements combined with NEON’s soil, plant and organismal data support the ecosystem-level study of carbon dioxide, water vapor and energy fluxes, as they cycle through the atmosphere, vegetation, and the soil. Flux tower data combined with soil and airborne remote sensing data supports scaling of fluxes, soil moisture, and evapotranspiration to a continental scale. Data collected from the tower support greater understanding of ecological processes and change, such as changes in air quality and climate.

NEON terrestrial site design with the instrument and observing systems covering a wide range of scales. The terrestrial instrument system comprises a flux tower, multiple soil plots (white squares), as well as a rain gauge (DFIR, or Double Fence Intercomparison Reference). Basic meteorological, atmospheric composition, and eddy covariance (EC) flux instrumentation are located on the tower top. These capture the larger-scale synoptic forcing and surface-atmosphere exchange of the surrounding ecosystem, respectively. Additional measurements at multiple vertical levels along the tower, at the rain gauge and in the soil capture local phenomena.

Data are collected using a series of automated sensors installed on a walk-up tower. This flux tower is placed in the dominant vegetation at the field site and positioned to maximize data capture along the predominant wind direction in order to measure the representative ecosystem. The flux tower extends past the top of the vegetation canopy at each site to allow sensors mounted at the top and along the tower to capture a full vertical profile of atmospheric conditions from the top of the vegetation canopy to the ground. The number of measurement levels on a tower vary from four to eight levels depending on the ecosystem structure at each site. Horizontal poles, or boom arms, extend outward from the tower at each level. Each boom arm is 4 m long, which is twice the width of the tower to minimize the impact of flow distortion caused by the tower on wind measurements.

Data products from the buoys at aquatic sites include: