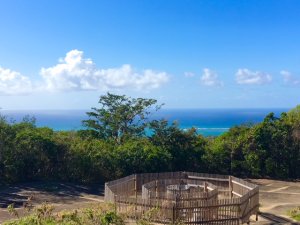 The first year of full operations in the Atlantic Neotropical Domain (Domain 04) was a rough one. Just as the field sites in Puerto Rico were coming online for the first time, Hurricane Maria dealt the island a devastating blow in September 2017. Now, NEON is helping researchers monitor the aftereffects as well as other changes in this vibrant and fascinating ecoclimatic Domain.

The NEON Atlantic Neotropical Domain encompasses all of Puerto Rico and the southern tip of Florida (though all four field sites are in Puerto Rico). Overall, the Domain is characterized by a warm, wet climate that supports tropical rainforest conditions. However, within Puerto Rico there are a number of distinct ecosystems that range from the mountainous interior to the coastal lowlands. These ecosystems include a pristine dry tropical forest, several subtropical wet forests and rain forests, lakes and rivers, and coastal beaches. There are also cleared agricultural lands and heavily populated urban centers.

At just 100 miles long by 35 miles wide, the island of Puerto Rico lies at the border between the Atlantic Ocean and the Caribbean Sea. The surrounding waters and the mountainous terrain heavily influence the climate. The average annual temperature in Puerto Rico is a balmy 85°F (30°C) in the lowlands and 70°F (21°C) in the mountains, and it stays close to these temperatures year round. In the summer, the temperatures in the lowlands may reach 100°F (37°C) with humidity between 60% and 100%. In the winter, both temperature and humidity drop somewhat, but daily highs still reach the 70s or 80s across most of the island.

Average precipitation varies from 30 inches per year in the more arid regions to more than 170 inches per year in El Yunque National Forest. The rainy season lasts from May through November, and it is dryer during the winter and spring. Nearly one quarter of the annual rainfall on the island comes in the forms of tropical storms or hurricanes. Hurricane season lasts from June through November and peaks in mid-September.

More than 3.6 million people call Puerto Rico their home, and human activity has a major impact on the ecosystems of the island. In addition to densely populated urban areas, roughly 50% of the land is used for agriculture. Cattle grazing and intensive agricultural production—including coffee, citrus fruits, plantains, bananas, mangos and papayas, among others—have changed landscapes and replaced native species.

The wilder areas still boast a diverse range of birds, reptiles, amphibians and plants, including a number of rare or endangered species found nowhere else in the world.

The only native mammal species remaining on Puerto Rico are bats. All other extant terrestrial mammals have been introduced by humans, including mongoose and other small mammals that now roam wild. The forests host a large number of reptile and amphibian species, including the tiny Coquí frog, the endangered Puerto Rican Crested Toad, and numerous species of lizards. You'll also find a colorful variety of both endemic and migratory birds, including the Puerto Rican green parrot, the Puerto Rican Nightjar, hummingbirds and warblers. Many of the plant and animal species that are unique to the island are now endangered due to shrinking habitats and changing climate.

The Guánica Dry Forest which includes the largest tract of dry tropical coastal forest in the world. The area was once underwater, and the forest grows in limestone (karstic soil) formed from ancient coral reefs. It is located on the southwestern shore of the island, where a heat island effect displaces rain-carrying clouds and creates a warmer, dryer climate. The town of Guánica, with a population of just over 9,000, is situated on the outskirts of the reserve.

The forest was designated as a state reserve in 1918 and a United Nations Biosphere Reserve in 1981, an international designation for the conservation of unique ecosystems. Biodiversity here is the highest among the ecosystems on the island, including the rainforest, and includes nine of Puerto Rico's sixteen endemic bird species and half of Puerto Rico's bird species overall. Both the Puerto Rican Nightjar and the Puerto Rican Crested Toad make their home here along with other endangered species including a number of endangered plants. Plant species along the coast include cacti, grasses and shrubs, and the forest is made up of areas with semi-evergreen, deciduous and scrub trees.

Formal research in the area dates all the way back to the explorations of Christopher Columbus. There are numerous research projects hosted within Guánica Forest today, including research plots maintained by the Smithsonian and several universities. The Guánica Forest (GUAN) field site is located on land managed by the Commonwealth of Puerto Rico Department of Natural and Environmental Resources. NEON field scientists work closely with the department to minimize their impact on endangered species in the area.

Like all NEON terrestrial field sites, the data collection systems at GUAN include airborne remote sensing surveys, automated instrument measurements and observational field sampling. The meteorological/flux tower is 66' with five measurement levels. There are also multiple plots for soil sensors and sampling and organismal sampling including birds, ticks and mosquitoes. At both D04 terrestrial field sites, scientists collected small mammal data from 2016-2017. Small mammal sampling protocols are currently suspended due to safety issues. The existing data are available on the data portal.

The Rio Cupeyes (CUPE) aquatic wadeable stream field site is located in a rainforest area within the mountains of western Puerto Rico. The Rio Cupeyes is one of the most pristine 2nd order streams on the island, and is part of the Guanajibo River watershed in the Maricao State Forest. The Commonwealth of Puerto Rico manages the area. This wilderness area is used primarily for fishing and other recreational activities.

CUPE provides an excellent baseline for aquatic measurements and observations in Puerto Rico, because it is minimally impacted by human activity and has not been contaminated by septic systems, industry or agriculture.

The forest preserve is among the most beautiful and unspoiled areas on the island, but is also challenging to get to. There are no roads or trails to the field site, so the crew needs off-road vehicles to access it. This made it particularly difficult to get equipment to the site during the construction phase. The NEON field site is the first formal research effort of any kind in the area. Learn about the types of data collected at this field site.

The Lajas Experimental Station (LAJA) terrestrial field site is located on the site of an existing agricultural experimental station owned by the University of Puerto Rico Mayagüez Campus. The NEON field site also incorporates some farmland owned by a private farmer, which makes up 25% of the total site area. It is located in the southwestern corner of the island, where it is relatively arid. The Critical Zone Exploration Network also has a nearby field site.

The station was established as a research and development center in 1946 to study agricultural practices and establish best practices for the area. The land has primarily been used for dairy cattle grazing and growing feed for the cattle industry, including hay and sorghum. Parts of the site are dedicated to grow other crops, including mangoes, corn, sorghum and squash. It is highly managed, with agricultural activities taking place year round. Much of the soil has been heavily compacted by cattle movements and enriched by the application of manure and other fertilizers.

The Lajas Experimental Station provides an excellent contrast to the pristine forest conditions at Guánica. Data gathered at LAJA will help researchers evaluate the impact of agriculture and human activity on the local ecosystem and monitor these impacts over time.

The meteorological/flux tower at LAJA is 26' with four measurement levels. Learn more about the types of data collected at this field site.

Rio Guilarte (GUIL) is a 2nd order wadeable stream field site located in central Puerto Rico on the site of an older agricultural experimental station. The surrounding land has primary been used for growing coffee, oranges and limes. This is a rainforest area, with daily afternoon rains and frequent flooding. Bamboo and other thick vegetation line the riverbanks and the water level can change dramatically when the rains come through.

Because the river is part of an agricultural watershed, it receives high loads of nutrients during parts of the year, particularly from the coffee plantations. The site provides a contrast to the pristine Rio Cupeyes area. The data collected at GUIL will be of special interest to researchers monitoring the impact of agricultural runoff on watersheds. Learn more about the types of data collected at this field site.

Monitoring the Aftermath of a Hurricane—and Preparing for Another Season

Hurricane Maria was a defining moment for the NEON Atlantic Neotropical Domain (D04)—and, of course, for the island as a whole. The hurricane hit Puerto Rico as a high-end Category 4 storm on September 20, 2017 with winds of 155 mph. The impact on the island was devastating, with an estimated 3,000 deaths and widespread damage to buildings, farmland, infrastructure and wilderness areas. Maria knocked out Puerto Rico's entire electric grid, and many areas were still without power 10 months later.

In the weeks immediately following the storm, Domain Manager, Yamil Toro and his field scientists worked tirelessly to repair the damage and get the field sites back online—while many of them were also recovering from personal losses and doing their part to address a humanitarian crisis unfolding across the island. They had to use chainsaws to restore access to the GUAN site, clearing more than 16 miles of trails to get sampling programs back up and running. Thanks to their hard work, the observational sampling started up again just 14 days after the hurricane struck. Both towers were built to withstand hurricane-force winds and survived Maria without major damage, but it took several months to get instruments back online and recalibrated.

All four NEON field sites are once more gathering important data to monitor ecological changes on the island. Part of that work involves studying the aftermath of Hurricane Maria and collecting data from subsequent hurricanes and tropical storms. Data collected before and after the Maria are providing insights into changes in vegetation and canopy structure and in the geomorphology of the rivers at CUPE and GUIL. While power outages left a gap in sensor data immediately prior to and during the storm, the automated measurements collected before and after Maria will help scientists to better understand and potentially predict the impacts of massive ecological disturbances like Maria.

In addition to watching for tropical storms, the Domain 04 team is gathering data that will help researchers and land managers understand how agriculture and other human activity are affecting delicate neotropical ecosystems. These data could help policy makers and land managers make informed decisions to protect the unique ecosystems of Puerto Rico and the endangered plants and animals that call the island home.