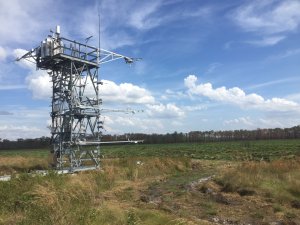 If you like it hot and steamy, NEON’s Southeast Domain (D03) is for you. This diverse subtropical Domain is home to an estimated 5 million alligators, more than 40 million people, and, of course, the world's most famous mouse.

With field sites at the Disney Wilderness Preserve, The Jones Center at Ichauway, and the Ordway-Swisher Biological Station, NEON's Southeast Domain provides a model for collaboration between industry, academia, and large-scale research infrastructures to further ecological and conservation research.

The Southeast Domain encompasses most of Florida; the Gulf Coast regions of Texas, Louisiana, Alabama, and Mississippi; and portions of Georgia and South Carolina. This is the Coastal Plains region of the southeastern U.S., with a mix of lowland, wetland and coastal ecosystems bordering the Gulf of Mexico and Atlantic.

The climate of D03 is humid subtropical, with steamy summers and mild winters. Late summer and fall bring tropical storms and often hurricanes, sometimes catastrophic. This balmy environment supports high levels of biodiversity, with more than 1,800 endemic plant species and iconic animal species like the American Alligator and Nine-Banded Armadillo.

Currently, much of this biodiversity is under threat due to climate change and the pressures of agriculture and urbanization. The longleaf pine forests that once covered much of the region now comprise less than 5% of the land, severely shrinking habitats for many endemic mammal and bird species. Marine and coastal habitats are at risk from rising seawaters, pollution, and the impact of increasingly frequent and severe tropical storms. Over the last two hundred years, many wetland areas have been drained for cattle grazing, crop growing, and human settlement, with wide-ranging consequences for the region as a whole. Changes in climate and land use patterns have also opened the door to invasive plant and animal species that are changing the character of the landscape and pushing out vulnerable native species.

Over the next 30 years, the NEON program will be working closely with the site hosts at our field sites to monitor these changes and provide data to support conservation efforts.

The partnerships in the Southeast Domain represent a unique blend of academic, industry, and large-scale research organizations. In the coming years, NEON will continue support the individual missions of our hosts and partners and create opportunities to share knowledge and resources on a regional level.

Science at the House of Mouse with The Nature Conservancy

The Disney Wilderness Preserve, managed by The Nature Conservancy (TNC), sits on 11,600 acres of land near Kissimmee, Florida and Walt Disney World. Once a pine forest and wetland area at the head of the Greater Everglades Watershed, it was logged, drained, and used for cattle ranching throughout most of the 1900s. In 1992, the Walt Disney Company purchased 8,400 acres of the property and transferred it to TNC for wetland restoration. Another 3,200 acres was purchased by the Greater Orlando Aviation Authority and other entities to meet mitigation requirements and turned over to TNC for management.

Since then, the preserve has been recognized as one of the premier wetland conservation areas in the state. TNC has overseen wetland restoration and a prescribed fire protocol in forested areas to restore native habitats. The preserve now features a roughly equal mix of pine uplands and wetlands. It is home to a thriving Wood Stork population, North America's only native stork, and supports a small population of the endangered Red-Cockaded Woodpecker.

Beatriz Pace-Aldana, the Research Coordinator for the Florida Chapter of TNC, says “We are very conservation-driven. We are interested in native species diversity and in natural systems and processes and how to maintain them. The data sets that NEON generates help us get more information about our preserve.” She is especially excited about the hyperspectral and lidar data from the NEON Airborne Observation Platform (AOP), which they plan to use to understand the structure of the pine stands that the Red Cockaded Woodpecker and other species depend on.

Scientists at TNC are also interested in seeing how changes they are seeing at the Disney Wilderness Preserve compare to ecosystem changes across the region and continent. “It’s a great benefit to have data that is comparable on a continental scale and across timescales,” says Pace-Aldana, “so we can look at species and landscapes over time. We are looking forward to seeing how data collected here compares to data from other NEON field sites to see if the changes we are seeing here are unique to us or if they reflect broader patterns across the country.”

In addition to the direct data that NEON provides, NEON’s DSNY site has been a magnet for other researchers. Pace-Aldana says, “NEON has raised the profile of the preserve and has been a lure for researchers interested in studying the ecosystem here.”

An Ongoing Partnership with UF at the Ordway-Swisher Biological Station

The NEON program’s relationship with the University of Florida’s Institute of Food & Agricultural Sciences (UF-IFAS) has flourished into a thriving partnership at UF's Ordway-Swisher Biological Station (OSBS). The 9300-acre biological station, located near Gainesville in north central Florida, sits on land that was maintained for nature conservation and hunting throughout most of the 1900s. It is now managed by the university for the long-term study and conservation of unique ecosystems through management, research, and education. NEON maintains three field sites here, including a terrestrial site and two aquatic lake sites.

John Davis, the station Director and Associate Dean of Research at UF-IFAS, says that the data collected by NEON are an invaluable resource for faculty and students from UF and other regional universities who conduct research at Ordway-Swisher. “With NEON, you have a set of ready-made data that is organized, archived and of very high scientific quality, so [researchers] are not starting from scratch. There is so much more here than they would be able to collect on their own. They can see what is already available and focus their efforts on exploring specific questions that the data may suggest.” UF-IFAS has also taken advantage of the NEON Assignable Assets program for several projects, including data collection to support studies of carbon capture by terrestrial ecosystems, phosphate transport in water, and large-scale forest dynamics.

The collaboration between UF-IFAS and the NEON program has set the bar for partnership in ecological research through a series of ongoing activities that share information and research practices and promote collaboration between researchers in academia and industry. These activities include regular meetings between UF-IFAS and NEON staff to discuss research priorities, tours of the NEON infrastructure at OSBS for UF faculty and staff, and opportunities to shadow NEON field researchers. In turn, NEON field staff appreciate the facilities and resources that the staff at Ordway-Swisher have made available to them, including a new on-site field lab that the station built to provide a staging area for collected samples. The field lab has become a natural “collision space” that promotes collaboration and informal discussion between the NEON and Ordway-Swisher teams.

Research, Conservation, and Education at The Jones Center at Ichauway

The Jones Center at Ichauway is a 29,000-acre preserve in rural southwestern Georgia. Originally established as a quail hunting reserve by long-term Coca-Cola Chairman Robert Woodruff, it was set aside for research and conservation in the 1990s. It is notable for its extensive tracts of mature longleaf pine and wiregrass habitat—among the few remaining across the Southeast. The NEON program has two field sites here, a terrestrial site and an aquatic site at Flint River.

The facility now supports a range of research and conservation efforts, including a prescribed fire regimen to manage the longleaf pine habitats and wildlife management programs for the bobwhite quail. The Jones Center research programs include water resources, forestry, and wildlife. The Center also partners with regional universities to enable ecological research with co-sponsored grad students.

Scott Taylor, a Senior Research Associate at The Jones Center, says that the data collected by NEON complement existing research programs at the Center. “NEON has filled a void in an area of the facility that hasn’t been sampled much. It is a good data set that we can compare to data we are collecting in other parts of the property.” He sees the greatest benefit in the AOP data. “We could never afford to collect this kind of remote sensing data on our own. It’s great to have this high-quality data from the flyovers of our site.” He is especially interested in seeing data from areas that were disturbed by Hurricane Michael in 2018.

Taylor also appreciates the strong relationships that have developed between The Jones Center, NEON staff, and the other Southeast region hosts. “Our relationship so far has been really good. This is a fairly isolated place, so a lot of people stay on site in our dorms here. The NEON team has become part of the Ichauway family.”