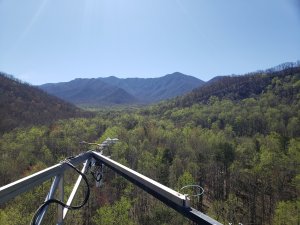 This blog series explores each of the 20 NEON ecoclimatic Domains and the field sites within them. Watch for news from our other Domains coming soon!

Domain 07, in the heartland of the U.S., is a land of rolling hills, steep ridges, gentle valleys, and many shades of green. The Appalachians and Cumberland Plateau feature some of the world's oldest mountains and the world's largest hardwood-forested plateau. The region's rich geologic history and temperate, moist climate have made it one of the most biodiverse areas of North America.

D07 covers 271,000 km2 (105,000 square miles), encompassing most of Kentucky, the southern half of Ohio, and parts of Indiana, Tennessee, West Virginia, Virginia, and North Carolina. The five NEON field sites are located in eastern Tennessee and western Virginia.

The Appalachian Mountains that lend their name to this Domain extend 2000 miles across eastern North America from southeastern Canada to Central Alabama. This "Eastern Continental Divide" defines the hydrology for the region, with eastern watersheds flowing into the Atlantic and western watersheds flowing into the Gulf of Mexico. D07 includes parts of the Great Smoky Mountains and the Blue Ridge Mountains, along with the western foothills and Appalachian Plateau. The Cumberland Plateau, covering eastern Tennessee and Kentucky, is part of the larger Appalachian Plateau.

The terrain ranges from steep and mountainous in the eastern part of the Domain to the flatter plateaus and tablelands in the west. The Appalachians are one of the oldest mountain ranges on Earth, formed through uplift caused by a continental collision roughly 300 million years ago. Over the eons, erosion has worn them down, creating a gentler topography than seen in the younger Rocky Mountains to the west. Peaks in the Great Smoky Mountains in Tennessee and North Carolina are more than 1800 meters (6000 feet) above sea level. The Cumberland Plateau is about 300 meters (1000 feet) above sea level and is characterized as a "dissected plateau," split by a multitude of rocky ridges and steep ravines and gorges carved by water in the shale and sandstone. The area is rich in minerals and natural resources, including coal, natural gas, and iron ore.

The region is notable for rich biological diversity, supporting a great variety of plant and animal species. Plant community composition can vary greatly across elevation gradients. Lower elevations usually feature deciduous forests with mixed oak, maple, beech, and hickory, which give way to spruce and fir at the upper elevations. A huge variety of ferns, herbs, and wildflowers are found here as well.

Black bears roam across much of the region, along with white-tailed deer, coyotes, bobcats, red and grey foxes, skunks, raccoons, and woodchucks. European boars were introduced in the early 20th century and are now commonly found in eastern Tennessee and western North Carolina, including Great Smoky Mountains National Park. There is also an abundance of small mammals, including several species of squirrels along with mice, moles, voles, and chipmunks.

The climate in the central Appalachians and Cumberland Plateau is temperate and wet, featuring hot, humid summers and cool winters. The average annual rainfall in the Smoky Mountains ranges from 55 inches (1400 mm) in the valleys to more than 85 inches (2160 mm) on some peaks. These upper elevation areas are classified as temperate rain forests, receiving more precipitation than anywhere else in the country except the Pacific Northwest. The area is subject to periodic droughts and wet spells, which influence wildfire activity.

The Oak Ridge terrestrial site and Walker Branch aquatic site are colocated on the grounds of Oak Ridge National Lab on land owned and managed by the Department of Energy (DOE) and the Tennessee Wildlife Resources Agency (TWRA). The sites are located in eastern Tennessee near Knoxville, in the Ridge and Valley region of the Appalachian Plateau. Access is restricted.

The landscape is predominantly upland hardwood forest with a mixture of oak, hickory, and other deciduous species in the valleys and chestnut oak and Virginia pine on the ridges. Most of the NEON sampling plots are forested, with a few located in pasture or meadowland managed for quail habitat. Walker Branch is a small wadeable stream draining a 1.1 km2 (270 acre) watershed.

This area was logged and tilled in the 1800s and early 1900s. Since 1942, the DOE has housed a number of research programs at ORNL, including the Manhattan Project. However, most of the land was allowed to return to its wild state, providing an opportunity to monitor a largely pristine second-growth forest ecosystem. Environmental research within the Walker Branch watershed dates back to the 1960s.

The NEON Mountain Lake Biological Station site, located in the Appalachian foothills of southwestern Virginia, is on a University of Virginia (UVA) research station established in the 1930s. The NEON sampling parcels are located partly on land managed by UVA and partly on land managed by the U.S. Forest Service. The neighboring George Washington and Jefferson National Forests comprise one of the largest blocks of public land in the eastern U.S., containing 1.8 million acres of woodland managed for recreation, hunting, wilderness protection, and timber production.

The forest here is typical of the southern Appalachian region, with a northern hardwood forest dominated by northern red oak and red maple interspersed with white oak. There is a rich understory featuring witch hazel, serviceberry, and cinnamon fern, which can grow over five feet tall. The NEON tower is at an elevation of around 1219 m (4000 ft.) while some of the sampling plots are located at around 610 m (2000 ft.), providing an opportunity to monitor ecosystem characteristics at different elevations. MLBS lies almost directly on top of the Eastern Continental Divide.

The Great Smoky Mountains National Park terrestrial site and LeConte Creek aquatic site are located in the Great Smoky Mountain National Park, which lies on the border of Tennessee and North Carolina and is our nation's most visited national park, renowned for its natural beauty and biodiversity. The Smoky Mountains are home to more than 19,000 documented plant and animal species and may host thousands more undocumented species. The park was established in the 1930s and contains one of the largest remaining stands of old-growth eastern deciduous forest in North America.

The terrain here is mountainous, and plant communities vary significantly by elevation and slope. The NEON terrestrial sampling plots provide a window into these differences. Deciduous trees such as poplar, maple, and oak are found in the valleys, with a dense understory of mountain laurel, spicebush, and rhododendron. At upper elevations, conifers such as Fraser fir and red spruce dominate. 76 endangered plant species are found within the park. Black bears, ruffed grouse, and European wild boars can often be spotted in the park and at the NEON field sites. LeConte Creek is a high-gradient, second-order mountain stream with a series of steps and pools, draining a 9.13 km2 (2256 acre) watershed.

A significant wildfire burned more than 10,000 acres of forestland in 2016, including some NEON sampling plots. These plots now provide data to monitor post-fire ecosystem recovery. Some areas, in particular the sampling areas around LeConte Creek and the NEON tower, also experience frequent high winds as a result of wind channels forming in the narrow gorges.

Monitoring Biodiversity and Species Composition in the Appalachians

In a landscape known for such rich biodiversity, monitoring how species composition varies across landscapes and is changing across time is of particular interest. The NEON program monitors plant community composition as well as insects, birds, small mammals, and aquatic species. These data provide insights into how elevation, land management, and climate variables impact the species composition of Appalachian ecosystems. For example, data from the NEON D07 sites have documented large shifts in beetle community composition in response to cycles of drought and precipitation.

Invasive insect species—such as the emerald ash borer, southern pine beetle, and hemlock wooly adelgid—pose a particular risk to many of the dominant tree species throughout the Appalachians and Cumberland Plateau. In some areas, large swaths of dead trees, a result of beetle kill, are both an eyesore and a safety hazard. These trees become hazards during high winds and create an elevated wildfire risk. Non-native plants such as kudzu, Oriental bittersweet, and mimosa are also changing the landscape, in some places out-competing native plants that local wildlife depends on.

In the coming decades, climate change in the southern Appalachians may accelerate some of these shifts, enabling some species to survive further north or at higher elevations than previously seen. Warmer temperatures and changing precipitation patterns could also impact species composition for the Appalachian forests and result in an increase in vector-borne diseases carried by ticks, mosquitos, and small mammals. Data from the NEON field sites will help researchers monitor these shifts and build better predictive models of ecosystem change in the southern Appalachians and Cumberland Plateau.