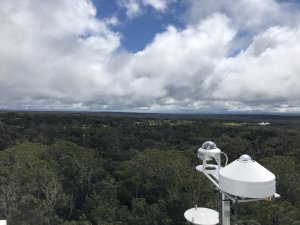 This blog series explores each of the 20 NEON ecoclimate Domains and the field sites within them. Watch for news from our other domains coming soon!

Aloha, and welcome to the NEON Pacific Tropical Domain (D20). This beautiful tropical locale boasts a lush landscape with a diverse range of plant and animal species—many of which are found nowhere else on earth.

D20 is the smallest and westernmost of the NEON eco-climatic Domains, encompassing all of the islands that form the state of Hawai‘i. The Hawaiian Islands, lying at latitude 20° N, are part of a tropical climate zone that forms a band around the Earth near the equator. Other Pacific islands in this zone include the Marshall Islands, the Mariana Islands, Papua New Guinea, and the Federated States of Micronesia.

The Hawaiian Islands are a volcanic archipelago comprised of eight major islands, several atolls, and numerous small islets. Hawai‘i is the most isolated populated landmass on Earth, located in the middle of the Pacific Ocean 2,390 miles (3,846 km) east of California and 3,850 miles (6,196 km) west of Japan. The nearest other island, Midway, is more than 1,300 miles (2,092 km) away. This geographic isolation has resulted in unique ecosystems; more than 90% of the plant and animal species native to the islands are endemic, meaning they are found nowhere else.

The climate here is tropical, with average temperatures in the mid- to high-70s° F (22° - 26° C) year round. Trade winds blow in from the east from April through October, bringing frequent light rains. Heavier storms are often seen in the winter months.

The islands are among the most ecologically diverse places in the world. Temperatures and precipitation patterns vary widely across the islands, with annual means ranging from just 8 inches (204 mm) near the summit of Mauna Kea on the Big Island to 404 inches (10,271 mm) on the western slope of Maui. In general, the windward eastern slopes are wetter, supporting tropical rainforests and wetlands. The western slopes feature a mixture of biomes including rainforests, tropical dry forests, subalpine grasslands, and arid or semi-arid grasslands and deserts. At upper elevations, the climate is more temperate, with snow falling on the highest peaks.

Hawai‘i is home to a diverse range of plant and animal species. Native ‘ōhi‘a and koa trees dominate many of the forest biomes, along with dozens of other endemic species of trees, shrubs and giant ferns. There are only two species of mammals native to the islands: the Hawaiian Hoary Bat and the Hawaiian Monk Seal. However, there are dozens of species of birds endemic to the islands, many of which are now endangered due to habitat loss. Some of the most notable include the ‘akiapōlā‘au (the Hawaiian honeycreeper), the ‘alalā (the Hawaiian crow), and the nēnē (the Hawaiian goose, the state bird of Hawai‘i).

PUUM is located on the "Big Island" of Hawai‘i, on the northeastern slope of Mauna Loa just north of Hawai‘i Volcanoes National Park. It is part of the Pu‘u Maka‘ala Natural Area Reserve (NAR), a 75.8 km2 (29 sq. mi.) wildlife reserve managed by the Hawai‘i Department of Land and Natural Resources Division of Forestry and Wildlife (DLNR-DOFAW).

Pu‘u Maka‘ala is a tropical rainforest ecosystem dominated by wet ‘ōhi‘a and koa forests with a dense fern understory. The NEON field site occupies 47.2 km2 (18.2 sq. mi.) of the reserve near an area once used by the nearby Kūlani Correctional Facility for cattle grazing. The Hawai‘i DLNR-DOFAW is in the process of restoring much of the native forestland. There are a number of endangered plant and bird species within the NAR, including the ‘alalā, which were declared extinct in the wild in 2004 and re-released into the Pu‘u Maka‘ala NAR in 2017.

The PUUM site includes a 105' meteorological/flux tower, an array of soil sensors, 20 observational tower base plots, and 20 distributed observation plots along with bird grids and mosquito collection plots.

The Hawaiian Islands support many distinct ecosystems and a high degree of biodiversity. However, many of the endemic species of the islands are now threatened by habitat loss, invasive species and a changing climate. Nearly 25% of the species on the U.S. list of endangered species are found here, and dozens of species are believed to have gone extinct, leading some to call the islands the "extinction capital of the world." The NEON project will provide vital data to monitor these changes and their impact on the local ecosystem.

Invasive species are a particular concern on the islands. Over the last few hundred years, humans have introduced a number of mammal, reptile, amphibian, and insect species, many of which are threatening native species and their habitats. Feral pigs are found throughout the islands and are particularly damaging to the forest understory where many native bird species nest. Mongoose and small rodents have also spread across Hawai‘i and often eat the eggs of ground-dwelling birds. Introduced insects are also a threat for native birds—especially mosquitos, which can carry avian diseases. Rising temperatures due to global climate change could allow mosquitos and other introduced insects to move into higher altitudes on the islands.

Invasive plants such as the strawberry guava are also a problem in Hawai‘i's rainforests. Pu‘u Maka‘ala is home to a number of highly endangered plant species, including a dozen species that have been designated by the state as part of the "Plant Extinction Prevention" (PEP) program. New plant pathogens are changing the forests, too. Over the last decade, Rapid ‘Ōhi‘a Death, a fungal disease, has wiped out tens of thousands of acres of ‘ōhi‘a forest. Since ‘ōhi‘a trees form the main canopy in a majority of Hawai‘i's forests, their loss will have a devastating impact on the bird and insect species that depend on them.

The Pu‘u Maka‘ala NAR has been the focus of intensive conservation efforts to restore native habitat and protect the forests from feral pigs and other invasive species. NEON scientists work alongside the Hawai'i DLNR-DOFAW and other conservationists to monitor the impact of these efforts and detect changes to this unique and delicate ecosystem.