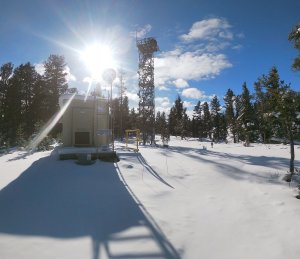 From the glaciers of Glacier National Park to the geysers of Yellowstone, the Northern Rockies Domain (D12) is home to some of the most stunning landscapes in the U.S. Sprawling across 290,000 km2 (112,000 square miles) of western Montana, Idaho, and northwestern Wyoming, the Domain boasts more than 20 national parks and forests and millions of acres of protected wilderness.

The Rocky Mountains divide the continent from British Columbia down to New Mexico, stretching more than 4,800 km (3,000 miles). The central part of the range, crossing Idaho, Montana, and northern Wyoming, supports a number of different ecosystems including alpine forests, alpine meadows, alpine tundra, taiga, grasslands, prairie, and sagebush scrub. The mountainous terrain results in different ecosystem zones at different elevations; travelers may find themselves moving from grassy valley bottoms to dense conifer forests to treeless alpine tundra over a relatively small geographic area. There are numerous freshwater lakes, rivers, and streams throughout the region.

The Domain contains some of the largest expanses of wilderness in the U.S., which have very high levels of biodiversity. Iconic species of the Northern Rockies include grizzly bears, black bears, lynx, wolves, bighorn sheep, moose, elk, bobcat, and cougars. Mule deer, black-tailed deer, and white-tailed deer are also numerous, and bison can be found in the grassy plateaus of Yellowstone. Smaller mammals include marmots, river otters, mink, martens, badgers, beavers, and porcupines. More than 300 species of birds have been reported in the national parks, including bald eagles, loons, ospreys, great horned owls, and pileated woodpeckers. Lakes and streams support trout, pike, and other game species, and kokanee salmon and grayling can be found in the northern parts of the Domain.

Climate here is greatly influenced by altitude and varies across the Domain. In Yellowstone, where the NEON field sites are located, summertime highs average 21 - 27°C (70 - 80°F), with higher temperatures at lower elevations. Overnight lows can dip below freezing at the highest elevations year round. Winter daytime temperatures are typically between -20 to -5°C (0 - 20°F). Further north in the Domain, temperatures are cooler, and some peaks can see snowfall even in the summer months. Precipitation is also influenced by the mountains, ranging from 380 mm (15 inches) to more than 2,000 mm (80 inches). Some areas have significant snowfall, especially at higher elevations. Snowpack accumulation and melt are an important part of the mountain watershed and ecosystem.

Domain 12 has one terrestrial field site and one aquatic field site, which are co-located in Yellowstone National Park:

YELL and BLDE are nestled into the Northern Range of Yellowstone National Park on the Blacktail Deer Plateau just south of the Montana-Wyoming state line. The field sites are located in one of last remaining truly pristine areas in the park. The land is part of the Greater Yellowstone Ecosystem (GYE), which encompasses one the world's largest nearly-intact temperate-zone ecosystems. It is also part of the Yellowstone to Yukon Conservation Initiative, which created a protected habitat corridor to enable safe migration for animals beyond the park boundaries.

The surrounding area is sparsely populated. The nearby communities of Gardiner (pop. 875) and Cooke City (pop. 150), both in Montana, provide entryways into the park from the north.

This is a rugged and geologically active area, though none of Yellowstone's famous geysers are located near the field sites. Field researchers working here must be alert for potential encounters with grizzly bears, wolves, or other wildlife. The sites are part of a designated bear management area for the park, which limits access to the tower and creek instruments during parts of the year. Blacktail Deer Creek is one of several creeks and streams running through the plateau.

Across the Northern Rockies Domain, one of the biggest challenges in coming years will be balancing the needs of people with those of wildlife and ecosystems. Mining, oil and gas, and timber industries have a major presence in the region. Other areas are dominated by farming and ranching. Tourism is also booming thanks to the many national parks and forests, ski resorts, and wilderness activities. While population remains low overall, some areas have seen a population boom thanks to tourism or energy production. As more people migrate to or visit the area, conflicts between conservation goals and economic priorities will continue to grow.

Human activities have had a major impact on the environment. Mining in particular has created significant pollution problems in some areas. Acid mine drainage (AMD) from closed mines pollutes streams and watersheds, threatening aquatic ecosystems far downstream from the original mines. Many older mines predate modern environmental law and have no clear chain of responsibility for environmental clean up.

Climate change is also putting pressure on ecosystems. Temperatures are rising faster in the Northern Rockies than the global average. Montana has lost 11 of its 39 named glaciers since 1966, and climate scientists predict that the rest will be gone within the next few decades. Winter snowpack has declined across the Rockies, impacting the watersheds that depend on melting snows in the spring. At Yellowstone, scientists document how rising temperatures and reduced snowfall alter the timing and intensity of the spring runoff. These changes have a cascade effect on the plants and animals in the ecosystem. Some species are moving northward or to higher altitudes as temperatures rise. The changing climate also enables invasive species and new pathogens to move in, threatening some native species.

Over the 30-year life of the NEON program, these changes are predicted to accelerate. NEON researchers will provide important data to document changes in climate and ecosystem composition in Yellowstone's Northern Range.