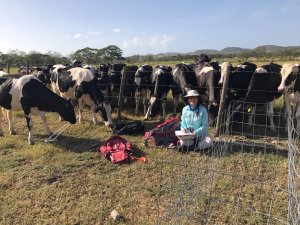 Cows and croplands dominate large portions of the U.S. How does this agriculture impact ecosystems? NEON field sites located on or near agricultural land – including some colocated with Long-Term Agroecosystem Research (LTAR) sites and Agricultural Research Stations – can help answer important questions about the interactions between agricultural activities and native ecosystems.

Agricultural land, including both pasture land and cropland, makes up more than 44% of the total area of the U.S. With so much land devoted to livestock and crops, it's important to understand how different agricultural practices impact the ecosystem. Agricultural sites within the Observatory allow comparison between wilderness and farmlands within the same Domain or enable monitoring of the impact of different land-use models, such as high-intensity vs. low-intensity grazing.

NEON and LTAR: Building on a Legacy of Agricultural Research

The Long-Term Agroecosystem Research (LTAR) network is overseen by the U.S. Department of Agriculture (USDA) and supports research into sustainable agriculture. The 18 sites in the LTAR network represent a range of different agroecosystems, including row cropping, grazing lands, forage production, and integrated agricultural systems. USDA works with local and national research partners at LTAR sites to conduct both experimental and observational studies. The goal is to create a roadmap for sustainable intensification of agricultural production to meet the needs of a growing world population.

While LTAR in its current form was established in 2011, the research history at many of the sites goes back much further. Many sites were originally established as Agricultural Research Stations (ARSs) in the late 1800s and early 1900s. These sites provide a rich trove of historical data going back decades.

The NEON program has three sites colocated with LTAR sites hosted by the USDA: Central Plains Experimental Range, Jornada Experimental Range, and Northern Great Plains Research Laboratory. Consequently, NEON has been working with LTAR to leverage each other's resources effectively and efficiently to move the missions of both programs forward. For example, NEON and LTAR staff ran side-by-side comparisons of their respective soil sensors in 2017 at CPER to inform data quality investigations. More recently, in May and June 2021, NEON and LTAR program staff co-led a virtual workshop series funded by the National Science Foundation that brought a diverse group of scientists together to identify the potential and priorities for integrating the resources of these and other research networks to advance understanding of managed and unmanaged lands at regional to continental scales. This workshop series generated seven new collaborative research groups addressing important questions about a range of relevant topics including soil, water, carbon, biodiversity, and climate change. Such collaborations are hoped to accelerate scientific discovery and ultimately lead to greater harmonization of data collection and analysis across these networks.

The Central Plains Experimental Range (CPER), located in northern Colorado in D10 (Central Plains), has been used for agricultural studies since the 1930s when the Dust Bowl drove many farmers out of the region and created a new urgency for understanding sustainable agricultural practices. USDA programs here are focused mainly on cattle ranching, with plots subjected to different land management practices and varying grazing intensities and strategies.

The Jornada Experimental Range, in D14 (Desert Southwest), is managed by the USDA and New Mexico State University. It was established in 1912 as a long-term ARS to study the impact of grazing on arid grasslands. In addition to continued animal agriculture studies, the center now focuses on desert ecosystem functions, including dust movement and reseeding of native vegetation. Research here was instrumental in the understanding of desertification and woody shrub encroachment on arid grasslands.

The Northern Great Plains Research Laboratory (NOGP) field site is near Bismarck, North Dakota, in D09 (Northern Plains). It sits on the site of a U.S. Department of Agriculture research laboratory, established in 1912 to develop science-based agricultural methods suitable for the Northern Plains region.The research lab conducts research on both row agricultural products, such as corn and soybeans, and the impact of cattle grazing on grasslands. The NEON field sites are located on rangelands that have been used for cattle grazing for most of the last hundred years.

Beyond LTAR: Rangelands, Croplands, and Restoration Across the Observatory

The LTAR sites are not the only sites that offer opportunities to study the impact of agriculture on native ecosystems. A number of other sites across the Observatory are actively farmed or grazed or have been in the recent past. Data from these sites will allow researchers to study the impact of agricultural practices in different ecosystems, from the high deserts of the Great Basin to the neotropics of Puerto Rico.

Blandy Experimental Farm (BLAN), in D02 (Mid-Atlantic), is located on land owned by the University of Virginia and used as a state arboretum and research facility. Blandy Experimental Farm supports numerous research and community outreach activities, including field, forest and crop manipulation studies and studies of pollinators and insect-plant interactions. A very small portion of the arboretum contains native uncultivated forest. Surrounding land is used for grazing or feed crop.

The Dakota Coteau Field Site (DCFS) field site is in the Prairie Pothole region of North Dakota, in D09 (Northern Plains). The site is located on state trust land that has been leased to local farmers for grazing for more than 100 years. Today, the site is grazed at some times during the year, but not continuously. Grazing intensity is lower than at the Northern Great Plains Research Lab site (NOGP) in D09. The surrounding area is changing rapidly, with more land being converted to corn and soybean farming.

The Konza Prairie Agroecosystem (KONA) is in D06 (Prairie Peninsula). The land is managed by Kansas State University's Department of Agronomy and Department of Animal Science and Industry. NEON plots are located in the North Agronomy Farm and the Ashland Bottoms Farm, where research focuses on cropping and tilling systems, management practices, and weed science. KSU also conducts research on animal health, breeding, and nutrition as well as food and meat sciences. Although none of NEON's KONA plots are located on animal-grazed land, it is possible to see the dairy cows from some plots.

The Lajas Experimental Station (LAJA) is in Puerto Rico, in D04 (Atlantic Neotropical). The site is located on an existing agricultural experimental station owned by the University of Puerto Rico Mayagüez Campus. The NEON field site also incorporates some farmland owned by a private farmer. The station was established as a research and development center in 1946 to study agricultural practices and establish best practices for the area. The land has primarily been used for dairy cattle grazing and growing feed for the cattle industry, including hay and sorghum. Parts of the site are dedicated to growing other crops, including mangoes, corn, sorghum, and squash. Lajas provides a contrast to the protected wilderness area at Guanica Forest (GUAN).

The Klemme Range Research Station (OAES), in D11 (Southern Plains), is located on the Oklahoma Agricultural Experiment Station in the Rolling Red Plains region of Oklahoma. The research station was established in 1887 and is now managed by the Oklahoma State University Division of Agricultural Sciences. The Klemme Range Research Station was established in 1990 and is dedicated to improving range cattle production. OSU students and faculty conduct a variety of research and educational programs focused on cattle management and pasture and forage improvement. OAES provides a contrast to the protected grasslands at the Caddo-Lyndon B. Johnson National Grasslands (CLBJ).

North Sterling (STER), in D10 (Central Plains), is hosted by a private landowner on a family farm that has been in operation for nearly 100 years. Currently, the farm supports a mix of cattle grazing and field crops, primarily wheat, millet, and hay. The site provides a contrast to the Central Plains Experimental Range (CPER) site in D10, which is only used for grazing. The site is at the edge of a non-tilled experimental ﬁeld that is used for the long-term sustainable Dryland Agroecosystems Project (DAP), which was initiated in 1985 at three sites in eastern Colorado to evaluate the eﬀects of cropping intensity on production, water use eﬃciency, and selected soil chemical and physical properties.

Onaqui (ONAQ), in D15 (Great Basin), sits south of Salt Lake City, Utah, and west of Provo. It is a desert sagebrush ecosystem that has been extensively grazed since European settlers arrived in the mid-1800s. It is now managed by the Bureau of Land Management, which has instituted a light-to-moderate fall and winter grazing regimen. This site is located within the BLM's Onaqui Herd Management Area, where wild horses have roamed since the late 1800s. The land is also used for recreation and hunting. Recently, efforts have been made to restore the native sagebrush ecosystem.

The San Joaquin Experimental Range (SJER) is north of Fresno, California, in D17 (Pacific Southwest). It was established in 1934 as California's first range research station. Its original research goal was to identify cost-effective methods of livestock production and monitor the impact on the grass and oak woodland ecosystem. Research objectives have since expanded to contribute to scientific knowledge of ecological patterns and processes in this ecosystem.

The Santa Rita Experimental Range (SRER), in D14 (Desert Southwest), is located in the foothills of the Santa Rita Mountains south of Tucson, Arizona. It is the oldest continuously operating rangeland research facility in the U.S. It was managed by the USDA from 1903 until 1988, when control was handed over to the University of Arizona. It is now used by the University of Arizona College of Agriculture and Life Sciences and the School of Natural Resources as an experimental laboratory to study desert ecology, climate change, hydrologic processes, range management, and wildfire.