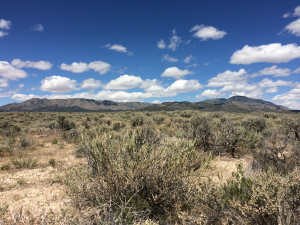 West of the Rockies and east of the Pacific Coast, you will find a windswept high desert plateau where wild horses and coyotes roam among sagebrush and juniper. The Great Basin (Domain 15) is also home to the iconic Great Salt Lake, expansive salt flats, and rugged hills and canyons. The NEON program is monitoring changes in the desert ecosystems resulting from warming temperatures, decreased snowpack, and human activity.

The Great Basin Domain sprawls over 745,750 km2 (288,000 square miles) of Nevada, western Utah, eastern Washington and Oregon, and portions of Idaho and Wyoming. It is named for the Great Basin watershed, the largest contiguous endorheic (closed) watershed basin in North America. (An endorheic watershed is one that does not drain to the sea.) Most of the Domain is lightly populated, with the exception of the Salt Lake City, Boise, and Reno metropolitan areas. However, agriculture—especially cattle ranching—has a large impact on desert habitats throughout the Domain.

Most of D15 is characterized as High Desert Plateau. The majority of the desert features a sagebrush-scrub ecosystem dominated by big sagebrush (Artemisia tridentata) interspersed with shrubs (including rabbitbrush, bitterbrush, and ephedra) and native bunchgrasses. Invasive introduced grasses such as cheatgrass are pushing out native bunchgrass species in many areas. Invasive species, livestock grazing, and fire suppression have changed the character of the sagebrush desert across much of the region.

Higher elevation areas are characterized by pinyon-juniper desert communities, which may have a sagebrush understory. Some taller ranges within the Great Basin feature montane ecosystems with bristlecone pine, Douglas fir, ponderosa pine, and subalpine fir. Aspen, willow, cottonwood, and chokecherry can be found in riparian communities.

Iconic native animals of the Great Basin include pronghorn antelope; mule deer; elk; mountain lion; coyote; jackrabbit and desert cottontail; small mammals such as packrats and kangaroo rats; and an assortment of desert lizards and snakes. The high desert supports a range of indigenous and migratory birds such as the golden eagle, western meadowlark, black-billed magpie and, most notably, the threatened greater sage grouse. The Great Basin is also home to an estimated 80,000 wild (or feral) non-native horses, descendants of horses lost or dumped by Spanish explorers, Native American tribes, and generations of ranchers.

The Great Salt Lake in northern Utah is one of the most interesting features of the Great Basin. Covering an area of 4400 km2 (1700 square miles), it is the largest saltwater lake in the Western Hemisphere. It is the remnant of the much larger prehistoric Lake Bonneville, which once covered much of Western Utah. Its high salinity—much saltier than seawater—is the result of the endorheic hydrology of the Great Basin. Waters flow into the lake from the Jordan, Weber, and Bear Rivers, carrying snowmelt from the Utah Mountain Range, but have no outlet in the closed system. High levels of evaporation from the shallow lake have resulted in increasing concentrations of salt and minerals over time. The Great Salt Lake provides an important habitat for millions of indigenous and migratory birds. Smaller saline lakes, salt flats, and mudflats can be found throughout the Bonneville Basin.

NEON supports two field sites within the Great Basin Domain, one terrestrial and one aquatic. They are both located in Utah near the Great Salt Lake.

The Onaqui terrestrial site is south of Salt Lake City and west of Provo and Utah Lake. This is a rapidly developing area with significant impacts from human settlement and agriculture. The area has been extensively grazed since European settlers arrived in the mid-1800s. The Onaqui site now managed by the Bureau of Land Management, which has instituted a light-to-moderate fall and winter grazing regimen.

Cattle grazing and invasive cheatgrass have had a large impact on desert habitats at Onaqui. More recently, efforts have been made to restore some of the native sagebrush ecosystem. The site offers an opportunity to study ecosystem changes related to invasive and non-invasive species advancement and to monitor the impact of restoration efforts.

Red Butte Canyon cuts a path down the western slope of the Wasatch Mountain Range near Salt Lake City. The canyon is designated as a Research Natural Area managed by the U.S. Forest Service. Because access to the area is limited, it is one of the most pristine aquatic environments in the Wasatch region. The riparian plant community at the bottom of the canyon features box elder and cottonwood interspersed with chokecherry, dogwood, water birch, and various grasses and forbs. The mouth of the canyon supports a grass-forb community with big sagebrush, cheatgrass, wheatgrass, and bitterbrush.

Red Butte Creek is a free-flowing perennial stream flowing from its headwaters at 2500 m (8200 feet) into Red Butte Reservoir, then out through Red Butte Garden, and into Salt Lake City. The NEON sampling site is just upstream from the Red Butte Reservoir, with elevations from 1660 – 1720 m (5460 – 5640 feet). While the creek is no longer a source of drinking water for the Salt Lake Valley, several recreational areas are fed by it. Waterflow is highly variable, influenced by annual and seasonal trends in snowpack and precipitation.

Over the coming decades, the NEON program will give researchers a window into changes in the high deserts of the Great Basin resulting from human activity, invasive species, and climate change—from the dust in the wind to the waters flowing from the mountain snowpack.

Frequent droughts combined with invasive species have increased the risk of wildfire in the Great Basin states. Fire is a natural part of the sagebrush and juniper-pinyon ecosystems of the high desert. However, cheatgrass and other invasive grasses create a larger and denser supply of biomass than the native species they are replacing. These highly volatile invasive grasses may be driving more frequent and intense wildfires in the region.

Dust is another phenomenon of interest at the Great Basin sites. Dry topsoil in the high deserts generates dust that is picked up by the winds and carried eastward into the Southern Rockies and Colorado Plateau (D13) and Central Plains (D10). Human agricultural and construction activity, combined with longer periods of drought, have resulted in increased levels of dust in recent decades. This has implications for ecosystems further east where the dust settles. An increase in dust settling on the snowpack in the high mountains of the Southern Rockies is also reducing the albedo (amount of light reflected) of the snowpack, resulting in greater absorption of sunlight and accelerating early melting. The terrestrial field sites in D15, D13, and D10 have additional instrumentation to monitor the volume of particulate matter in the air.

Changes in dust production, fire activity, and water availability are expected to accelerate in the Great Basin states as the climate continues to warm. The NEON program will be here to monitor these and other changes in the region.