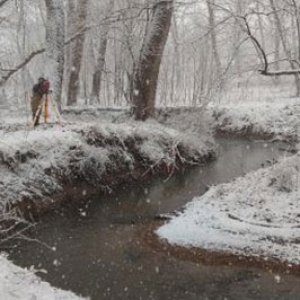 How does human activity impact the environment? The Mid-Atlantic Domain (Domain 02) is a great place to find out. The eastern seaboard of the U.S. has undergone massive changes and development over the last 250 years. Data from the NEON field sites in Maryland and Virginia provide a window into how land use patterns, invasive species and climate change are impacting eastern habitats and ecosystems.

The Mid-Atlantic Domain encompasses some of the most densely populated areas of the U.S., from Trenton, NJ to Atlanta, GA. The 312,500 km2 (120,670 square mile) Domain also includes the Washington D.C., Baltimore, Philadelphia, Richmond, Raleigh, Charlotte and Columbia metro areas. It is bounded by the Appalachian and Blue Ridge Mountains on the west and the Atlantic Ocean on the east.

The Domain has wide variation in climate and geography and, as a result, supports a diverse range of ecosystems. Summers tend to be hot and humid, with highs reaching 90-95°F (32-35°C) in the north and sometimes exceeding 100°F (38°C) in the south. Winters in the north are cold and damp, with daily average temperatures around 32°F (0°C) and frequent snowfall. At the southern end of the range, winter temperatures rarely drop below freezing. Most of the Domain receives abundant rainfall, especially along the southern coastal regions where warm, wet air from the Atlantic drives precipitation. The coasts are occasionally subjected to tropical storms and hurricanes. Numerous streams and rivers flow from the mountains to the Atlantic.

The maritime coastal plains along the eastern shore are dominated by oak and pine forests in the north giving way to longleaf pine, bald cypress and bottomland hardwood forests in the south. The Piedmont region, which lies between the mountains and the coastal plains, is characterized by rolling hills. Before European settlement, this area supported vast expanses of hardwood forests broken up by grasslands ("Piedmont Prairie") and depression swamps. Most of the original hardwood forests have been cut down, and newer forests tend to be dominated by pine.

SERC is located in eastern Maryland where the Rhode River flows into the Atlantic, on land owned by the Smithsonian Institute. The surrounding area in Anne Arundel County is a densely populated metro area near Baltimore and Washington, D.C.

The Smithsonian Environmental Research Center was founded in 1965 on land once used as a dairy farm. The 2650-acre facility supports a range of habitats, including terrestrial, wetland and estuarine. NEON sampling sites are located throughout the facility. Data gathered through the NEON project builds off of the half century of environmental research conducted at SERC.

SCBI and POSE are co-located in Northern Virginia, along the Appalachian Trail in the Blue Ridge Mountains, just north of Shenandoah National Park. This land is also owned by the Smithsonian Institute and supports conservation biology for the National Zoo. SBCI scientists breed and study endangered species from around the world, including some that are extinct in the wild.

These are the most pristine field sites in Domain 02, surrounded by national park land and rugged terrain. The area was logged and used for grazing in the past but is now mostly covered in second-growth deciduous hardwood forest. Posey Creek is a typical second-order mountain stream that flows through the site.

BLAN, in central Virginia, is located on land owned by the University of Virginia and used as a state arboretum and research facility. Blandy Experimental Farm supports numerous research and community outreach activities, including field, forest and crop manipulation studies and studies of pollinators and insect-plant interactions. A very small portion of the arboretum contains native uncultivated forest. Distributed grids are on the neighboring Casey Tree Farm, a nonprofit dedicated to commercial growing of urban trees, including sycamores, ginkgoes and bald cypress. Surrounding land is used for grazing or feed crop.

The LEWI aquatic site is on Casey Tree Farm. Lewis Run is a small creek that runs into the Shenandoah River. The area is heavily impacted by agriculture, particularly cattle grazing, and effluent from a water treatment plant. It provides a contrast to the more pristine Posey Creek.

Over the last two hundred years, the mid-Atlantic seaboard has been almost entirely changed by human activity. Outside of some of the more rugged areas of the Appalachian and Blue Ridge Mountains, there are very few places with untouched native habitat. Logging, agriculture, industry and urban development have left a deep impact on most environments.

Climate change and invasive species are also altering existing habitats. Invasive plants such as bittersweet honeysuckle, Japanese stilt grass, knotweed, wavyleaf basketgrass, and "mile-a-minute" weed (Asiatic tearthumb)—many originally introduced as ornamentals—are crowding out native species in many woodlands and grasslands, with cascading effects on bird, insect, mammal and microbial communities. At the same time, invasive insects such as the emerald ash borer have had a devastating impact on hardwood forests, leaving holes in the ecosystem for invasive plants to fill. A warming climate may expand the ranges for invasive plants and insects as well as for insect-borne pathogens such as Lyme disease.

Data from the NEON project will help researchers monitor the spread of invasive species and pathogens along with critical climate indicators. These sites also provide an opportunity to better understand how ecosystems impacted by human activities such as extensive logging and agriculture restore themselves over time. Young second- or third-generation forests are likely to have very different characteristics than the old growth forests they replace; NEON's sites in Virginia and Maryland will provide insights into how these newer forests are evolving over time and how local land use and management decisions affect their development. A better understanding of how human activities shape and impact these habitats could support more effective land management decisions in the future.