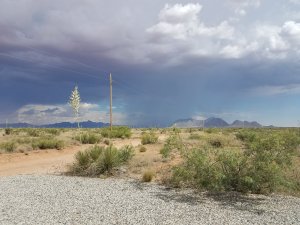 If you like it hot, the Desert Southwest may be for you. From the iconic saguaro cactus stands of the Sonoran to the mesquite scrublands of the Chihuahuan, this region offers a diverse range of desert and mountainous landscapes to explore. Data from the NEON field sites will help scientists better understand the impact of human disturbances and climate change on these unique and fragile arid ecosystems.

Each of these deserts features distinct terrain, climate, flora, and fauna communities.

These three regions showcase the enormous diversity within and between the southwestern deserts. Each desert features a unique mix of flora and fauna adapted to their harsh desert environment, with many found nowhere else in the world. In between desert areas, mountains create "sky islands" with cooler, wetter climates. The high, isolated mountain ranges support a variety of different biomes along the elevation gradients, with scrub and grassland transitioning into mixed conifer forests near the peaks.

The Jornada Experimental Range, managed by the USDA and New Mexico State University, was established in 1912 as a long-term agricultural research station to study the impact of grazing on arid grasslands. Research here was instrumental in the understanding of desertification and woody shrub encroachment on arid grasslands. In addition to continued animal agriculture studies, the center now focuses on desert ecosystem functions, including dust movement and reseeding of native vegetation.

Upland areas here were historically dominated by grasslands featuring black grama, mesa dropseed, and other perennial grasses. The site now features a mix of grassland and desert scrub, with heavy encroachment of woody shrubs such as creosote and honey mesquite into former grassland areas. Native desert animal species include the badger and banner-tailed kangaroo rat. From 1969 to 1973, a population of oryx antelope from the Kalahari Desert in Africa was introduced to the nearby White Sands Missile Range for big-game hunting opportunities. While they are an impressive sight in the Chihuahuan desert, they compete with native pronghorn and other ungulate species.

The San Andreas National Wildlife Refuge, located within White Sands, is one of the few riparian areas between the Rio Grande and the Sacramento Mountains and an important stop for migratory birds. Jornada was designated a UNESCO biosphere reserve in 1976. LTER maintains a nearby research site at Jornada Basin.

The Santa Rita Experimental Range, located 35 km (21.8 mi.) south of Tucson, Arizona, is the oldest continuously operating rangeland research facility in the U.S. It was managed by the USDA from 1903 until 1988 when control was handed over to the University of Arizona (U.A.). It is now used by the U.A. College of Agriculture and Life Sciences and the School of Natural Resources as an experimental laboratory to study desert ecology, climate change, hydrologic processes, range management, and wildfire. The center boasts a rich trove of data on arid grassland ecosystems and grazing practices going back more than 100 years.

SRER is located in the foothills of the Santa Rita Mountains. Vegetation cover is highly dependent on elevation. Creosote bush dominates at lower levels, while velvet mesquite and cholla cactus are found in the hills. A mix of short trees and thorny shrubs, cacti and other succulents, perennial grasses, and forbs are found across the site. Among the many distinctive fauna at the range is the carnivorous grasshopper mouse (yes, that one), which eats insects and smaller mammals and has evolved to be immune to the sting of the black scorpion. Plants and animals here are adapted to the bimodal precipitation pattern, with long dry spells punctuated by the heavy thunderstorms of the monsoon season and gentle rains in the winter.

Sycamore Creek is a shallow, intermittent desert stream in the Tonto National Forest, about 35 km (22 mi.) northeast of Phoenix. The site is hosted and managed by the U.S. Forest Service. The surrounding landscape is a typical northern Sonoran scrub ecosystem, with a mix of old-growth saguaro and cacti/palo verde forests. Cattle grazing occurs in parts of the watershed. A number of long-term research programs have been hosted at the site over the last several decades. It is currently a principal investigation site for the Arizona State University biology and ecology programs.

The creek originates in the eastern slopes of the Mazatzal Mountains and flows south to the Verde River. It is one of relatively few riverine wetlands in an otherwise arid region. Cottonwood, willow, sycamore, walnut, and ash can be found along the banks along with wetland grasses and forbs, such as bulrush, southern cattail, and knotgrass. The creek is home to a number of reptile, amphibian, and fish species, including longfin dace, lowland leopard frog, Sonoran mud turtle, and the non-native fathead minnow.

Sycamore Creek is notable for its powerful flash floods during the monsoon season, which can be strong enough to topple trees and present a danger to humans, livestock, and wild animals. These seasonal disturbances erode the banks and abrade the riverbed, resulting in significant changes to morphology.

Travelers through the desert southwest will discover many unique ecosystems, from the distinctive arid habitats found in each of these three deserts to the lush "sky islands." These ecosystems are both exceptional and fragile. Between human disturbances and climate change, they are also under a high degree of stress.

Periods of drought have become longer and more extreme over the last several decades; 2020 was the driest year on record for the Tucson area. The timing, intensity, and geographic patterns of the monsoon season may also be changing as the planet warms. With precipitation already so low, even small changes in rainfall patterns can have a big impact on desert plants and animals adapted to the monsoon cycles. Warming temperatures and less precipitation in the mountains also mean less snowpack to feed rivers, creeks, and ephemeral streams and washes.

Extended droughts, warmer summers, invasive grasses, and encroachment of woody shrubs into grassland areas have created an elevated risk of wildfires in some areas. Invasive grasses, such as buffelgrass, have turned parts of the Sonoran desert into grassland, providing additional fuel that may increase wildfire frequency and intensity. Because most native desert species are not adapted to wildfire, an increase in fire activity could further threaten endemic species like the saguaro.

A growing human population also puts pressure on desert ecosystems. Population growth in the desert southwest has been double the national average for decades and continues to be strong heading into the 2020s. Higher populations create more stress on limited water reserves. Agriculture, mineral extraction, habitation, and recreation also have an impact on desert ecosystems. Human development is encroaching on lands near all three of the NEON D14 field sites.

In the coming decades, rising temperatures, continued droughts and wildfires, and human settlement will continue to put stress on these unique and beautiful desert habitats. The data gathered at the NEON field sites will enable researchers to monitor these impacts and understand how the desert ecosystems are changing and adapting.