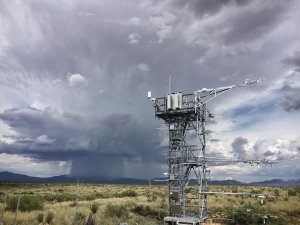 July marks the beginning of monsoon season in the American Southwest, and the NEON program is here for it! The NEON field sites in the Desert Southwest Domain (D14) collect data that can help researchers better understand how the monsoon impacts the ecology of the southwestern deserts and monitor how the monsoon season may be changing over time.

Wait, We Have Monsoons in North America?

If you don’t live in the Southwest, you may not be aware that North America has a monsoon season. But the monsoons are an important part of the ecology of the American Southwest and northern Mexico. These seasonal storms can bring 50% or more of the annual precipitation for desert ecosystems like the Mohave, Sonoran, and Chihuahuan deserts.

Officially, monsoon season begins in mid-June, but the average start time for monsoon rains in Arizona and New Mexico over the last 80 years has been mid-July. Their arrival is marked by frequent (often daily) rains. The beginning of monsoon season is also sometimes defined as three consecutive days when the dew point (the temperature at which moisture in the air will begin to condense) is above a certain temperature (54°F for Tucson, AZ).* Monsoon rains usually peak during August and are generally finished by the end of September.

Like its more famous counterpart in South Asia, the North American Monsoon brings life-giving rain. But while the South Asian monsoon tends to be broad-reaching across the continent, the North American version is characterized by more localized storm patterns. In a given year, some areas may receive near daily rains while others remain mostly dry. Storm clouds usually start building midday, resulting in cloudbursts that arrive in late afternoon or evening. Storms can be quite severe, with dramatic thunder and lightning and torrential rains. This sometimes results in flash flooding in dry washes and canyons miles away from the storm site.

The Changing of the Winds

The North American Monsoon is driven by a yearly changing of wind patterns in the Southwest. Most of the year, the climate in this part of the country is influenced by the dry westerly winds. But as the jet stream over the North American continent moves north during the summer months, high pressure systems from the subtropics move in. The subtropical pressure system spins with a clockwise rotation as it moves, causing a reversal of the winds.

During monsoon season, winds in the desert areas of the Southwest come from the south and southeast, bringing cooler, moister subtropical air with them. The system acts as a conveyor belt, cycling moisture from the Gulf of California, eastern Pacific, and Gulf of Mexico into the interior of the continent. As this wet air moves into the desert plateaus, solar heating results in the development of the seasonal monsoon thunderstorms.

Bringing the Desert to Life

The North American Monsoon is vital for the desert ecosystems of the American Southwest. When the rains come, the desert springs to life. The monsoon rains account for about 50% of annual precipitation for the Sonoran and Chihuahuan deserts. Another 40% comes during the winter rainy season in December and January. These seasonal rhythms influence nearly every aspect of the ecology of this region.

The impact of the summer monsoon is most visible in observing the plant life at our D14 field sites. Mesquite trees and other native deciduous plants start to leaf out rapidly, resulting in a period of “peak greenness” for our Southwest sites sometime in August. Some desert cacti and other plants bloom and produce fruit.

Animals also take advantage of the rainy season. The spadefoot toad and Sonoran Desert toad emerge from hibernation to reproduce, awakened by the thunder and pounding rain. Many desert species only reproduce in years when there is sufficient monsoon rain.

Monsoon rains play an important role in recharging the oases that sustain life for many desert species throughout the year. Humans depend on the rains, too. Indigenous peoples of the Southwest relied for centuries on monsoon rains for a summer growing season for crops such as beans, corns, and melons. Today, urban communities rely on the monsoon rains to refill drinking water reservoirs.

Monsoon Season for the NEON Program

For the NEON field sites in D14, monsoon season is an exciting time of year. Many NEON protocols are driven by “peak greenness,” which arrives for D14 sites during the monsoon. This is the time of year when NEON instruments and sampling protocols pick up the greatest seasonal variation.

Ecologists assume that when the landscape has hit peak greenness, above-ground biomass is at its peak and so is below-ground biomass. Therefore, we try and time our Herbaceous Clip protocol, the Below Ground Biomass protocol, the Microbial Soils and Soil Chemistry protocols, the Foliage Chemistry protocol, and the Plant Diversity protocol all during peak green. This is when the parts of the plant that are above ground such as leaves, shoots, and woody stems are most likely to be visible, and activity below the soil is also most likely to be at a peak. Because the monsoon rains have such a profound effect on our desert ecosystem, it’s important to sample then to get a robust idea about how these desert ecosystems function.

The NEON program provides important data to enable ecologists to detect changes in monsoon patterns over the next 30 years. Because the data are collected using the same protocols at all sites and from year to year, ecologists will be able to use NEON data to look for changes in wind and rainfall patterns and related changes in vegetation growth, carbon cycling, and other aspects of desert ecology that are impacted by the monsoon.

Shawn Rose, a Botanist and Field Ecologist for the NEON program in D14, is interested in how shifting climate patterns may impact the success of invasive species in the deserts. He notes that monsoons and invasive species have a large impact on wildfire risk for the Domain. Two of the biggest wildfires in Arizona history may have been driven by invasive plants like cheatgrass and Lehmann’s lovegrass, which create a larger mass of potential fuel during fire season. In drier years, when monsoon rains miss an area, large volumes of dry vegetation increase fire risk.

Shawn, who has lived in the Southwest for seven years, appreciates both the ecological and cultural impacts of the North American Monsoon. “It provides a catharsis and an escape from the heat,” he says. “So much of the middle part of the year is spent enduring really intense hot, dry conditions. The monsoon is a time of celebration and a season of plenty, when crops can be grown and plants start being alive again. It’s not just an ecological phenomenon but a cultural one here in the southwest. It just feels good.”

Right now, there are many unanswered questions about how the North American Monsoon is changing and the impact of climate change on the monsoon season. The monsoon varies naturally from year to year in response to large-scale climactic patterns such as El Niño and the movement of the jet stream. These patterns are changing as the planet warms and are likely to impact monsoon season in North America. Some evidence suggests that climate change may result in monsoon storms that are heavier, more localized, and harder to predict. This has implications for human safety as well as the health and stability of ecosystems and human communities in the Southwest. Data from the NEON program can help researchers monitor these changes and build better models of climate change in the North American deserts.

* The exact temperature varies with location; a dew point of 55°F is used to identify the start of monsoon season near Phoenix, AZ.