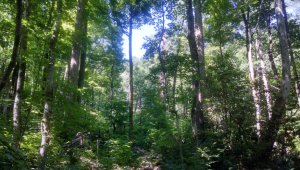 What makes some types of forests more productive than others? Asked another way, why do some forests capture more carbon from the atmosphere through photosynthesis than others?

Chris Gough, an associate professor of biology at Virginia Commonwealth University (VCU), is using data from the NEON program to explore relationships between forest structure, biodiversity, and other characteristics and their ability to sequester carbon. His collaborative work with PIs from the University of Connecticut and Purdue University was recently published in Ecology: “High Rates of Primary Production in Structurally Complex Forests.”

“Net Primary Production,” or NPP, is the rate at which all plants within an ecosystem convert sunlight into usable chemical energy and carbon-rich biomass. During photosynthesis, plants use energy from the sun to convert carbon dioxide (CO2) and water into sugars that fuel their growth and supply the backbone of all organic molecules. In this way, carbon from the atmosphere is transformed into biomass. The oxygen we breathe is released back into the atmosphere as a bioproduct of photosynthesis.

When more photosynthesis occurs in an ecosystem, more carbon is taken out of the atmosphere and sequestered in plant tissues. Highly productive ecosystems are valuable “carbon sinks,” creating a net reduction in atmospheric carbon. Forests are especially valuable as carbon sinks because trees live a long time, keeping carbon sequestered in biological tissues rather than quickly releasing them back into the atmosphere. Globally, temperate forests are estimated to store between 99-159 petagrams of carbon, making them one of the most important terrestrial carbon sinks.

However, the factors that influence NPP—and the amount of carbon a forest is able to capture and store—have not been fully explained. Chris and his coauthors wanted to determine which characteristics of temperate forests were correlated with high levels of NPP.

Chris says, “The complexity metrics we are capturing give us important information about species diversity, leaf cover, and forest structure. The goal is to combine these into one useful composite measure that will be a strong predictor of carbon sequestration.”

The team measured forest structure using portable canopy LiDAR systems carried by researchers as they walked through the forest. LiDAR (Light Detection and Ranging) is a remote sensing technology that uses a rapidly firing laser beam to scan an environment and create a detailed 3D picture of its structure. (The NEON program also generates LiDAR data from above using the Airborne Observation Platforms.) They used the LiDAR data to look at a number of canopy traits, including vegetation density/area, height, cover, and canopy structural complexity. This provides a picture of how much vegetation is present at different vertical levels of the forest and how much area is covered by leaves (“leaf area index”). They also looked at measures of tree species diversity, including the number of different species present and the relative abundance of different species, derived from NEON biodiversity data. (For more on the LiDAR methods, see “Quantifying Vegetation and Canopy Structural Complexity from Terrestrial LiDAR Data Using the FORESTR R Package.”)

The amount of light intercepted by vegetation to drive forest productivity was estimated by comparing the amount of light reaching the top of the forest canopy to the amount of light reaching the forest floor. Light in the spectra used by leaves for photosynthesis (photosynthetically active radiation, or PAR) was measured from above and below at the same time. The difference between above-canopy and under-canopy light levels provides a rough estimate of how much PAR has been absorbed by leaves within the canopy. (For more on these methods, see “Forest Canopy Structural Complexity and Light Absorption Relationships at the Subcontinental Scale.”)

Finally, NPP was calculated by measuring changes in tree diameter from 2015 to 2016 and 2017. Tree growth is directly related to the amount of carbon that they absorb; the bigger the change in diameter from one year to the next, the more carbon the tree has sequestered in its trunk and branches. The NEON program  conducts repeated measurements of live tree diameters in selected plots as part of the woody plant vegetation structure sampling protocol.

A Structurally Diverse Forest is a Productive Forest

The study shows that structural complexity is the strongest indicator of forest productivity. Forests possessing greater structural complexity—that is, a lot of variation in the physical distribution of vegetation within the canopy and understory—are the most productive. Species diversity—which also tends to contribute to structural diversity—is a secondary factor in explaining differences in NPP.

Understanding relationships between forest structure and productivity could inform conservation and land management efforts. It could also help researchers improve climate models and predictions. Chris says, “When we better understand how to simulate the relationship between forests and atmospheric carbon dioxide, we may be able to improve our capacity to predict changes in climate over time. The results could inform land managers how to better protect ecosystems that are capable of sequestering carbon more effectively to mitigate some of the effects of climate change. We’re realizing that it’s not just about planting more trees—the type of forest, its structure and diversity, makes a big difference in its potential for capturing and storing carbon.”

Next, the researchers hope to extend this work by leveraging LiDAR data from the NEON AOPs, which can capture structural data over much larger areas than the portable units. Scaling up from land-based methods to airborne or satellite remote sensing methods would enable researchers to develop better estimates of terrestrial carbon sequestration potential on a regional or even continental scale. Chris also hopes to further explore the reasons behind the relationship between canopy structure and NPP. “We think structural complexity is an emergent property of an ecosystem that integrates a lot of different variables that are important for carbon sequestration,” he says. “Our next study will look more closely at variables such as diversity and leaf cover to try to better understand the factors that make forests more productive and resilient.”

Chris’s relationship with the NEON program extends beyond this study. He is also the chair of the Terrestrial Plant Productivity and Biomass Technical Working Group (TWG). In this capacity, he is working with NEON to develop protocols for the terrestrial plant data products and standardize measurement methods across sites with highly diverse ecosystem characteristics. The TWGs work to make sure that the data collected by the NEON program is useful and usable for the broader scientific community.