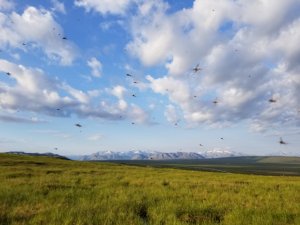 In mid-2015, the NSF announced its decision to rescope the NEON program.

While the NEON vision will remain unchanged, some components of the Construction project were reduced or removed.

NEON constructing 41 relocatable sites instead of 55

Construction of NEON’s relocatable sites was reduced in scope from 55 to 41 sites. NEON will retain infrastructure purchased for these sites and use it in the next planned deployment of relocatables under Operations. Future relocatable site selection will be made in consultation with NSF, the science community and permitting experts. Refer to NEON’s science design and interactive historical timeline for further context.

Upper Waiakea Forest Reserve, the core site in Hawaii, will be constructed. However, both relocatable sites in Hawaii were removed from the scope of construction due to challenges with implementing the design, the cost of operations and changes to the plant community altering the ability to answer intended scientific questions.

In the original design of NEON, these sites were selected to collect ecological data on urban environments. They have been removed from the project’s scope due to design and permitting issues that prohibited construction.

Six additional terrestrial relocatable sites were removed from the construction scope due to permitting, logistical or fiscal issues. A full list of descoped sites can be found below.

Aquatic stream sites intended to be used as controls for the STream Experimental Observatory Netword (STREON) will continue to be constructed. However, STREON was removed from NEON’s construction scope and NSF BIO will engage with the research community to determine next steps. All NEON aquatic sites are still slated for construction, with the exception of the two urban relocatable sites listed above.

NEON will move forward with all aquatic and terrestrial observational sampling and aquatic instrument sampling. The Observatory will collect most of its planned atmospheric and soil measurements; however, measurements of NOx and O3 and deployment of mini-rhizotrons were omitted from construction due to lack of instrument maturity, financial constraints and ability to deploy sensor systems continentally.

The construction goal was to outfit 10 MDPs as assets that could be requested for use during Operations of the Observatory. This number was scaled back by 50% due to unclear demand and an undefined operations model. Options for additional MDPs will be reconsidered during Operations. Learn more about our Assignable Assets program.

The following components of the Construction project were identified as mature and ready to accelerate into Operations: