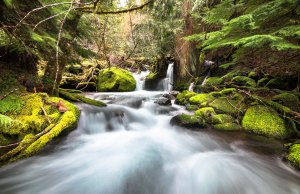 If you can't choose between the mountains and the ocean, the Pacific Northwest (D16) may be the place for you. This coastal Domain features spectacular mountain ranges, vast conifer forests, and a rugged, rocky coastline. The NEON field sites, nestled into the Cascade Mountains of Washington and Oregon, offer an opportunity to see how different land management strategies impact this unique temperate ecosystem.

The Pacific Northwest stretches along the coast of northern California, Oregon, Washington, and southeastern Alaska. The Domain, which covers 333,000 km2 (129,000 square miles) of the northwestern U.S., is bounded by the Pacific Ocean to the west and encompasses the Cascade Mountains to the east.

The region is highly geologically active, with multiple mountain ranges (including the Coast Range, Cascades, and Olympics) and a number of active volcanoes. The climate is heavily influenced by the ocean and mountains. As moist air from the ocean moves east across the mountain ranges, moisture is squeezed out as precipitation, creating a temperate rainforest climate with a rainy season running from October through April. The ocean also acts to moderate temperatures along the coast. Warm, dry summers and cool, wet winters are typical, with average annual temperatures around 10°C (50°F) and precipitation ranging from 1525–6100 mm (60–240 inches) annually.

The climate creates ideal conditions for the conifer forests that the Pacific Northwest is famous for. Much of the Domain can be classified as temperate coniferous forest dominated by evergreens such as Douglas fir, western hemlock, and western red cedar. Subalpine and alpine habitats are found on the higher peaks of the Cascades and Olympics.

The forests are home to many species including black bears, cougars, mule deer, elk, beavers, porcupines, and river otters. Coyotes have become common with the decline of the native grey wolf. Songbirds, woodpeckers, and raptors such as the spotted owl, bald eagle, and great horned owl also make their home in the forests. Mountain goats and marmots can be found in the higher alpine regions. The region is also known for its rivers and streams, which provide important spawning habitat for cold-water fish such as salmon and trout.

The Wind River Experimental Forest is located in midst of the Cascade Mountains in southern Washington, about 60 km (37 mi.) northeast of Vancouver. It was established as a silviculture research site in 1932 and is still managed by the U.S. Forest Service today. The 42 km2 (10,400 acre) experimental forest is part of the Gifford Pinchot National Forest, a 5340 km2 (1.32 million acre) expanse of forestland straddling the crest of the Cascades. It is administered by the USDA Forest Service's Pacific Northwest Research Station and the Gifford Pinchot National Forest.

The research site is heavily forested, dominated by Douglas fir, western hemlock, and Pacific silver fir, with patches of Pacific dogwood, western red cedar, and red alder. Parts of the site are managed for limited timber production and recreation. While timber harvesting has taken place across the site at various times, there are also large areas of old-growth forest, with some stands 450 to 500 years old. Many of the NEON sampling plots are located in these older stands, providing an opportunity to gather data from relatively pristine northwestern forest habitats.

The Martha Creek sampling reach (MART) is southeast of WREF, just north of the Columbia River Gorge in Gifford Pinchot National Forest. Martha Creek is a third-order wadeable mountain stream draining a 6.34 km2 (1570 acre) watershed. It is an important spawning site for steelhead trout. It also hosts a number of other fish species along with frogs, mollusks, salamanders, and numerous invertebrate species. The 2012 removal of a dam to improve fish passage in the creek allows for the study of aquatic habitat restoration.

Abby Road (ABBY) is located in the western foothills of the Cascade Mountains, about 32 km (20 mi.) west of the Wind River field site. This is a "working forest" managed by the Washington Department of Natural Resources for timber production and recreation. ABBY provides a contrast to the more pristine sampling plots at WREF.

The NEON field site is located within the Yacolt Burn State Forest, named after a large wildfire that burned more than 900 km2 (350 square miles) of forest in southwestern Washington in 1902. The area experienced numerous smaller fires over the next 50 years, until modern fire management practices and reforestation efforts were put in place to reduce the severity and frequency of fires.

The NEON sampling plots are located in areas that are actively logged for Douglas fir. Planting and logging take place on a 30- to 50-year rotation. Western red cedar and western hemlock can often be found between the planted Douglas fir. The forested landscape at Abby Road is a constantly shifting mosaic of different-aged stands of timber, dynamically responding to human management activities. Plantation trees grow rapidly, while understory plant communities shift quickly in response to timber harvest, thinning, and spraying. The NEON plots will enable researchers to monitor how the forest ecosystem responds to different management practices.

McRae Creek is located in the H.J. Andrews Experimental Forest in the western Cascades, about 80 km (50 mi.) east of Eugene, OR. Andrews Forest has been a part of the National Science Foundation's Long-Term Ecological Research (LTER) program since 1980 and is a major center for forest and stream ecosystem research in the Pacific Northwest.

The Andrews Experimental Forest was established in 1948 as the Blue River Experimental Forest. It is now administered by Oregon State University, the USDA Forest Service's Pacific Northwest Research Station, and the Willamette National Forest. Beginning in the 1950s, three experimental watersheds were created (clear-cut, partial cut, and uncut) to study the effects of logging on hydrology, sediment yield and nutrient loss.

McRae Creek is a small high-elevation mountain stream. It is home to a number of fish species, including largescale sucker, cutthroat and rainbow trout, Chinook salmon and three species of sculpin. The tailed frog, Cascade torrent salamander, and Pacific giant salamander are also found here.

Silviculture, Drought, and Fire in the Temperate Coniferous Forest

The Pacific Northwest is a distinctive ecosystem, one of the few examples of a temperate coniferous forest globally. Timber production continues to be an important part of the regional economy, with billions of board feet harvested annually. Timber production has declined dramatically since its peak in the 1990s, in part due to environmental protections such as the Endangered Species Act. Forest management for sustainable silviculture remains one of the hot-button issues for the region. NEON data from the two terrestrial sites will help researchers monitor how forest ecosystems respond to different management practices.

Record-breaking temperatures in the summer of 2021 have also put a spotlight on the role of climate change in the Pacific Northwest. While it is hard to attribute any single weather phenomenon to climate change, average temperatures in the region have risen by about 0.83°C (1.5°F) over the last century and are projected to keep rising at a higher rate than the average for the U.S. as a whole. The region is also expected to see more intense and frequent droughts in the summer months, an increase in heavy rainfall events and flooding in the rainy season, and a decrease in snowpack in the high peaks. These changes could have significant repercussions throughout the watersheds of the Cascade and Coast Ranges.

Invasive species put added stress on both terrestrial and aquatic ecosystems. Invasive plants such as Scotch broom, English ivy, and Himalayan blackberry are changing plant community composition in the Cascade and Coast ranges. Invasive aquatic species such as Asian carp and various mollusks could threaten native species such as the Chinook salmon.

Wildfires are another growing concern. Historically, the conifer forests experienced infrequent high-intensity fires, which cleared out underbrush and left large trees standing. High moisture levels made it hard for fires to start and spread in most years, leading to the coastal forests' reputation as "asbestos forests." As temperatures rise and droughts become more frequent and intense, the threat of wildfire has grown across the region. Trees stressed by drought, disease, and invasive species are less resilient and more susceptible to fire damage. Invasive woody shrubs and grasses also create more fuel for wildfires. Increased fire activity threatens both human settlements and natural habitats in the region. Better management strategies grounded in an understanding of forest dynamics could help to reduce the risk.

Data from the NEON program will provide a window into these rapidly changing ecosystems over the next three decades. Through the NEON Assignable Assets Program, NEON infrastructure has also been used to support wildfire research and other programs, such as the Worldwide Hydrobiogeochemical Observation Network for Dynamic River Systems (WHONDRS) program. NEON data and infrastructure provide a valuable resource for researchers, policymakers, and land managers seeking to better understand this unique biome.