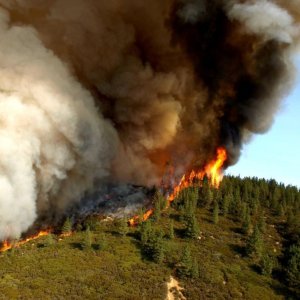 What happens when a carbon sink goes up in smoke?

Dr. Jennifer Balch, a Fire Ecologist at University of Colorado Boulder, is studying wildfire-impacted areas in the western U.S. to answer burning questions about forest recovery and carbon storage potential. Her work could lead to improved models of the impact of wildfires on atmospheric carbon levels and climate change.

The Double Impact of Forest Fires

Forests are an important "carbon sink"—that is, an ecological system that captures and stores carbon from the atmosphere. As plants grow, they absorb carbon dioxide (CO2) from the atmosphere and convert it into sugar and cellulose (as well as the oxygen we breathe). The carbon remains locked in plant tissues until the plant burns or decays. Globally, nearly 20% of Earth's carbon is stored in biomass. Large, mature forests have the greatest carbon storage potential.

Forest fires impact carbon cycles in two ways. As organic matter in the forest burns, much of the carbon stored in trees and other vegetation is rapidly released into the atmosphere, turning a former carbon sink into a carbon emission source. At the same time, the landscape loses much of its ability to capture and store carbon until mature trees regrow, a process that can take decades.

Balch and her team are looking at the impact of forest fires on carbon storage potential. Her study, which is funded through a National Science Foundation (NSF) CAREER grant, seeks to find out how long it takes for forests to recover after a fire and what that means for carbon storage during the recovery phase. To find the answers, Balch is leveraging cutting-edge remote sensing systems and building a network of more than 100 ecosystem scientists and graduate students.

Planes, Drones, and a Whole Lot of Data

The study uses remote sensing data from satellites, drones, and airplanes to examine landscapes at various stages of fire recovery along with undisturbed areas. Some of the data come from the NEON Airborne Observation Platform (AOP). "I see the NEON network as a fabulous set of control plots," Balch says. "They allow us to gauge how ecosystems should be doing without disturbances and compare to what is happening in nearby disturbed sites."

The NEON AOP aircraft fly over each of the NEON sites at "peak greenness," when growth and biochemical reactions are at their highest level for the year. Hyperspectral and lidar data collected on the flights can be used to measure the structure and chemistry of the forest canopy, including carbon content and photosynthetic activity. Balch's study will use data from AOP flights over three of the forested sites in the western U.S. as a control (including YELL, NIWO, and WREF).

The team will rely on historical satellite data from NASA to identify areas that have been impacted by wildfires in western states in the last 30 years. They are using Unmanned Aerial Systems (UASs)—or drones—to gather remote sensing data over disturbed areas. UASs will also be used to collect data during and immediately after fires that break out during the course of the study. "Drones are a relatively cheap and fast way to gather remote sensing data over disturbance plots," Balch says. "We can use drones to capture information in near real-time when a disturbance breaks out."

Comparing data from areas that have been affected by fires at different points of time with data from undisturbed areas will allow researchers to get a better understanding of how forest ecosystems recover after a fire and how long it takes them to return to their full potential as carbon sinks. Remote sensing data from the AOP flights and UASs allows researchers to look at these questions over very large geographic areas and collect vast amounts of data at a very fine scale. Balch explains, "We're creating a chronological sequence of what forested areas look like over time as they recover from a large fire disturbance. What do they look like five years later, ten years later, twenty years later? What is the recovery trajectory, and what does that mean for our models of carbon storage potential of recovering forests?"

So far, the team has conducted several UAS flyovers of a wildfire-impact site at a forested area near Cold Springs, Colorado, that was burned by wildfires in 2017. The site is near the NIWO field site outside Boulder, which will act as a control. NIWO is mostly undisturbed but does have one corner within the area impacted by the fire. They plan to collect UAS data from at least 36 wildfire-impacted areas in the southern Rockies over the next three years.

One of the first challenges will be correlating data from satellites, AOP, and drones so they can be compared. In addition to the Cold Springs flyover, the team has collected UAS data over the NEON field site at NIWO to compare to AOP data. "All of these data sources are capturing similar phenomena, but at very different scales," Balch says. "Space-based data may have a resolution of a kilometer squared, while AOPs give us information on the meter-squared scale and drones can gather data down to the centimeter-squared scale. Sometimes, looking at data at different scales produces different answers to our questions. We need methods to unify data gathered at different scales, from the individual leaf level all the way up to the entire forest."

Dr. Nayani Ilangakoon is a postdoctoral researcher who has been working with Balch since April of 2020. Her work is focused on post-fire recovery trajectory of western U.S. forest ecosystems. She is using satellite lidar data from NASA's Global Ecosystem Dynamics Investigation (GEDI) mission to examine vegetation recovery after fires. Her dataset includes more than 600 fires between 1985 and 2016, which each burned more than 1000 acres. She explains, "We need to better understand how different ecosystems respond to fires and what drives their recovery. Answers to these questions provide us critical information we need to model the carbon storage potential of burned ecosystems as well as to re-think our practices to manage and protect these ecosystems from future fires."

Ilangakoon's work will use also use lidar data from the NEON AOP flights to validate her results from the satellite data. She says, "We have a lot of data coming in from different sources and scales. The integration of this data helps us to better see what's happening within each ecosystem. We can't address large-scale ecological questions without knowing what is happening at the fine scale."

More than 100 scientists and graduate students will be involved in data collection, analysis, and synthesis for the study. One of the goals of the NSF grant is to increase data literacy for earth and environmental scientists. "Universities have not yet caught up in teaching data skills to our students in the earth and environmental sciences," Balch says. "We need to transform our curriculum to help people take advantage of the vast amounts of data coming out of ecology networks like the NEON program. It's a different way of doing science. Instead of starting with a hypothesis and testing it, we can start with the data first and see what questions emerge."

Balch is the Director of Earth Lab, a CU Boulder initiative focused on harnessing "big data" to accelerate our understanding of global environmental change. Earth Lab has created a series of tutorials and courses to help earth and environmental scientists and students build skills in data analytics. Many of these resources are free, including data tutorials on the use of programming tools such as R and Python to analyze environmental data. Dr. Leah Wasser, the Education Initiative Director for Earth Lab, has overseen development of more than 300 training modules, including modules on the use of data from the NEON program. The Earth Lab analytics hub now attracts more than 100,000 unique users per month.

Balch also led development of a NEON Science Summit that was hosted by Earth Lab in October 2019. The participant-driven "unconference" brought together NEON data users to share ideas and strategies for leveraging data from the NEON program. Balch and two colleagues wrote about their experiences with the NEON program and the NEON Science Summit in a February 2020 editorial for the ESA publication Frontiers in Ecology and the Environment.

The wildfire study is an excellent example of data-driven ecology at work. Getting answers to complex questions about forest recovery and carbon storage potential will require analysis and synthesis of vast amounts of data from disturbed and undisturbed sites, including data from ground observations, drones, AOP, and satellites.

With the incidence of wildfires on the rise, especially in drought-impacted western states, finding these answers is critically important. While fires have always been part of forest ecology, climate change is believed to be making many forests more vulnerable to fire. At the same time, the release of large amounts of carbon from burning forests and the loss of important carbon sinks create a feedback loop that may be accelerating the rate of climate change. "These are complex challenges, and building a better understanding of these relationships will require a collaborative effort," says Balch. "We need ecologists, data scientists and programmers to all be working together. In the big data era, there is no way for one person or one university to solve these problems alone."