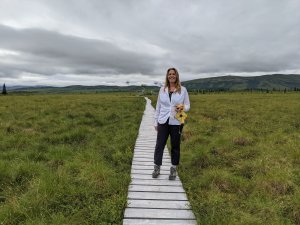 Understanding how carbon cycles between terrestrial and atmospheric systems is fundamental to building more accurate climate change models. But there are still many unanswered questions about how carbon moves between soil and the atmosphere and how those fluxes are influenced by plant, fungal, and microbial communities.

Dr. Laura Meredith, a researcher at the University of Arizona, is studying these interactions at NEON field sites in Alaska. She is working to validate the use of carbonyl sulfide (OCS) as a tracer molecule to better estimate of the amount of carbon taken up by plants. Her study was made possible through the NEON Assignable Assets Program and an NSF award.

Soil is the largest terrestrial carbon sink, holding an estimated 2500 gigatons of carbon globally. But the carbon storage potential of soil in any given ecosystem is heavily influenced by the presence and activity of plant, microbial, and fungal communities. Understanding these interrelationships is critical for refining our models of the carbon cycle. Meredith's research focuses on the complex relationships between plants, microbes, and soil and how these interactions influence carbon dynamics.

Plants are particularly tricky because they both take in and release carbon through different processes. It is hard to directly measure how much carbon is taken up by photosynthesis vs. how much is released through respiration. That's where the use of a "tracer molecule" comes in. In this case, the tracer is carbonyl sulfide (OCS). OCS is taken up during photosynthesis, but, unlike carbon, it is not respirated. This allows OCS to be used to estimate carbon uptake by plants in an ecosystem and separate out the contributions of photosynthesis and plant respiration in the carbon cycle.

Meredith explains, "It's important to be able to break this out because we can't be confident that climate change will affect photosynthesis and respiration in the same way, which could create an imbalance in the system. To build better models, we need to be able to resolve and study these two processes independently. The balance between the two is critical to understanding how much carbon is kept in the ground vs. how much is released into the atmosphere."

However, she first needed to validate the use of OCS as a tracer molecule, which required a better understanding of how fungal and microbial communities interact with OCS underground. She says there is no better place to tease out these complex relationships than the Arctic.

Meredith's study was funded through an NSF grant: Advancing Carbonyl Sulfide (OCS) as an Independent Atmospheric Tracer for Global Photosynthesis through Quantification of Microbial-mediated Sources and Sinks in Soils. She and co-PI Dr. Jana U'Ren (University of Arizona) and their students spent two and half weeks in Alaska this summer collecting soil samples and conducting plant surveys at the Healy (HEAL) and Delta Junction (DEJU) field sites in the Alaskan Taiga (D19). They also leveraged flux tower data and other data products from the NEON program in their research.

Why the Arctic? Meredith explains that little is known about the relative contributions of photosynthesis and respiration for small plants such as grasses, sedges, mosses, and lichens that make up much of the total plant biomass in the Tundra and Taiga. She says, "The Arctic is important because so much life is happening at ground level and underground, with miniature plants and soil microbes and fungi." In more temperate biomes, it is possible to partition respiration and photosynthesis by comparing carbon flux readings at night vs. during the day. Because photosynthesis does not happen in the dark, comparing the two readings enables researchers to estimate total photosynthesis and total respiration. However, this is not possible in much of the Arctic, where there may be light for 24 hours (or nearly so) during much of the growing season.

That is why the use of OCS as a tracer gas is of interest as an alternate method of partitioning photosynthesis and respiration. Before using OCS in her models, Meredith first needed to understand how the tracer molecule is taken up by fungi and microbes in the soil. To do this, she and her team collected soil cores and sent them to a lab for analysis. She needed to collect samples near a flux tower so she would have carbon flux and meteorological data to put her samples in context. She had completed similar studies at AmeriFlux sites, but the NEON field sites in D18 and D19 provided the perfect opportunity for her to expand her research in the Arctic. She plans to collect samples from Toolik Field Station (TOOL) in D18 in the future.

Meredith and her team are still analyzing the data, but she says the results are helping untangle the contributions of plant and microbial communities on OCS uptake in soils. She is especially interested in the impact of vegetation litter and fungal microorganisms in the soil. She says, "It's clear that the vegetation litter layer in the soil has a strong influence on how OCS is taken up. I was impressed by how much vegetation was found at the top of the cores and how big an impact it had. This was something that was not in the current models at all. We showed that this is important and needs to be added to the models."

Her team is looking at vegetation types, plant height, microbial community composition, and other variables in their analysis, which will include DNA and RNA analysis of microbes. Ultimately, she hopes to better understand exactly which microbial species are driving OCS fluxes and how plant communities influence the presence and activity of these drivers. Building a more accurate model of OCS flux is an important step towards validating its use as a tracer molecule for studying carbon cycles in the Arctic and elsewhere.

Meredith hopes to continue working with the NEON program, both in the Arctic and closer to home. She would like to conduct similar research at the Santa Rita Experimental Range (SRER) in Arizona. The ability to collect samples in sites with existing flux towers and a wide range of other data products is important for her research. She says, "NEON is so important for facilitating interactions between PIs like me and the modelers we are collaborating with. It relieves me of having to collect all of the other data the modelers need so I can focus on the specific things I need for my research." She also appreciates how easy it was to work with NEON through the Assignable Assets Program. "We worked alongside the NEON folks to translate our vision for sampling into an application form. They worked with us and gave us the resources and support we needed to be able to work independently at these sites. They were very helpful."