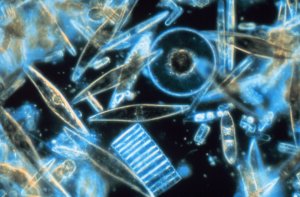 Put a drop of water from nearly any ecosystem on Earth under a microscope, and you're likely to see something extraordinarily beautiful: tiny single-celled organisms with intricately structured silica cell walls that shine like glass. These are diatoms, unicellular algae sometimes called "the jewels of the sea."

Limnologist Jordan Swenson, a former NEON field technician, studied these tiny jewels as part of her master's program at the University of Colorado Boulder (CU Boulder). An investigation into freshwater diatoms from the NEON aquatic field sites in Puerto Rico led to a reclassification of diatom taxa in the region, and the possible discovery of a new diatom species. She says, "Diatoms are so diverse, and they act as important bioindicators in the environment. Understanding what is out there and how they are related—getting the taxonomy correct—is fundamentally important to our understanding of the aquatic environment, everything from water quality to evolutionary history."

A paper recently published in Phytotaxa, co-authored by Swenson, her mentor Dr. Patrick Kociolek, and other colleagues, details the results of their research, which was enabled by samples from the NEON Biorepository.

A Case of Mistaken Identity in the Rivers of Puerto Rico

Diatoms are found practically everywhere where there is water and come in a dizzying variety of shapes and sizes, sorted into more than 1000 genera representing an estimated 20,000 distinct species. Classification of diatoms is intricate work involving detailed observations of minute differences under a microscope.

Historically, diatoms have been classified into different taxa based on their morphology. Diatoms may be bilaterally or radially symmetric and come in a range of shapes including discs, spheres, rods, cubes, and flat tapered oblongs. The silica-based cell wall, called a frustule, is often highly ornamented with spines, ribs, ridges, grooves, and pores. A species is identified by the unique pattern of ornamentation on the frustule, and species are classified into different taxa (class, subclass, order, family and genus) based on the similarities in these patterns.

With so much diversity, naming and classifying diatoms into appropriate taxa is a significant challenge. A single species may be unknowingly named and described by two separate scientists, one species may be misidentified as another, or different scientists may disagree on the order or genus that a species belongs to.

Kociolek and Swenson first detected something fishy about the classification of a tropical freshwater diatom species while examining samples from the Rio Guilarte (GUIL) and Rio Cupeyes (CUPE) NEON sites in Puerto Rico. The diatom in question had been identified as Denticula occidentalis, a species first described in the U.S. Virgin Islands. But closer examination of the patterns of ribs and striations on the frustule revealed the diatom to be not just another species, but a species belonging to a different genus entirely. The newly discovered diatom was reclassified into the Grunowia genus and named G. portoricensis. The species was later discovered to be previously illustrated in Venezuela.

This isn't the first diatom discovery to come out of the NEON field sites in Puerto Rico. In 2019, another team discovered an entirely new species of diatom at CUPE and GUIL: Adlafia neoniana, the first new species named after the NEON program.

Who Cares About Diatom Classification?

The reclassification of G. portoricensis may seem like a microscopic tempest in a tiny drop of river water. But diatom classification has bigger implications for ecology. Dr. Stephanie Parker, an Aquatic Ecologist for the NEON program, explains, "Diatom nomenclature tells us a lot about biodiversity in a region. If we can get the names and taxa right, we can better understand diatom range, diversity and evolution." Currently, diatoms in the Americas—especially in the tropical and neotropical zones—are understudied compared to European diatoms, and many North and South American species were originally classified using identification keys based on European taxa. Samples collected by the NEON program could help to fill gaps in our understanding of North American diatom taxonomy.

Swenson says, "Diatoms are really good bioindicators. While you may only have a few species of fish in a river, you may see 200 or more species of microalgae. And they are incredibly sensitive to subtle changes in in water quality or chemistry, temperature and other environmental factors. Monitoring the relative abundance, diversity, and presence or absence of diatom species over time can tell us a lot about how an environment is changing. But to make applicable discoveries, we first have to know the foundations—including the correct identification and taxonomy of species in our samples."

Swenson completed her MS in Museum and Field Studies at CU Boulder in August 2020 with a specialization in Limnology, or the study of inland freshwater ecosystems. After completing her BS in Environmental Studies at Gettysburg College in 2013, she translated her love of the outdoors into a variety of experiences, including stints as a river guide and naturalist for Glacier National Park and Canyonlands Field Institute. In 2017, she joined the NEON program as a seasonal technician for aquatic sampling in Domain 10 – Central Plains. She has since spent three field sampling seasons with the NEON program, taking on leadership roles for the aquatic sampling team and working with the NEON science team on special projects to increase the availability of data and legacy samples.

She appreciated the opportunity to gain valuable field and analytical experience while working with the NEON program. "The best thing about working with the NEON program is the variety of protocols you are exposed to," she says. "This is especially important for ecologists in the early part of their careers. They have purposely designed the field programs with a focus on giving early career scientists a wide variety of experiences and exposure to a lot of different protocols."

Swenson is especially excited about the possibility of future discoveries awaiting scientists within the NEON archives. She says, "A biorepository is a form of museum, and museums have always played an important role in scientific discovery. I relied on comparative samples and drawings [from other museum collections] while investigating diatom taxa, comparing our digital photos to drawings made by hand 100 years ago. The NEON Biorepository is really important because it makes samples from different locations and seasons accessible to researchers."