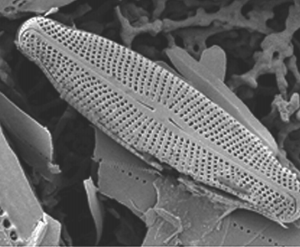 Adlafia neoniana (Naviculaceae) may be tiny, but it's got a big name to live up to. It's the first new species to be discovered on a NEON field site and named after the NEON program.

So what is this newly discovered organism? A single-celled aquatic alga with a cell wall made of silica, known as a diatom. The discovery was made at the Rio Cupeyes (CUPE) and Rio Guilarte (GUIL) field sites in Puerto Rico by a team led by Marco Cantonati, Don Charles and Ionel Ciugulea of the Academy of Natural Sciences of Drexel University and the MUSE - Museo delle Scienze (MC). Their work was published in July 2019 in Plant Ecology and Evolution.

"Diatoms produce somewhere between 25 and 40 percent of all oxygen on Earth, so every third or fourth breath, be sure to thank a diatom!" So says Don Charles, a diatom researcher at the Academy’s Patrick Center for Environmental Research and one of the study authors.

Diatoms are among the most numerous and diverse organisms on earth, with an estimated 200,000 species in existence. They are found in just about every aquatic environment on earth, from shallow-water hydrothermal vents to polar ice caps to tropical streams. They are notable for being the largest taxon of organisms on earth with a cell wall made of silica. This transparent silica shell (called a frustule) can appear to sparkle like glass under a microscope, giving them the nickname "the jewels of the sea".

Diatoms are a type of microalgae, formally classified as eukaryotic protists. They are among the many single-celled organisms that form the base of the aquatic food chain. Like other algae, diatoms are photosynthetic, turning light energy into food. Unlike most other algae and plants, most diatoms store this energy as an oil rather than a starch. This makes them a highly valuable food source for many small invertebrates living in water and sediments, including bivalves, insect larvae and tiny crustaceans.

The Discovery of a New Diatom Species

With so many species of diatoms out there, discovering a new one isn't a particularly rare occurrence. But we'd like to think that this one, discovered at our NEON field sites, is a little more special than most.

Diatom species are distinguished by the shapes and patterns of their silica shells. Diatoms have shells made up of two parts (called valves) that fit together like the halves of a pillbox. Most diatoms are circular or elongate, but some are triangular, square or elliptical. During asexual reproduction, the two valves separate and form two new individuals.

The silica shells can be highly intricate, with complex structures and patterns. Some of the differences can be seen under a typical light microscope, but some species can only be distinguished with the help of a Scanning Electron Microscope (SEM).

The new species was discovered in samples of material scraped from stones at the CUPE and GUIL aquatic field sites in Puerto Rico, part of NEON’s Atlantic Neotropical ecoclimatic zone. These sites are typical neotropical streams. CUPE is located in a pristine rainforest in the mountains of western Puerto Rico. GUIL is in the central part of the island and runs through an area heavily impacted by agriculture.

Marco Cantonati was the first to suspect that the samples from the Puerto Rico sites contained a new diatom species. While classifying and counting diatoms in the samples, something just didn't seem quite right. He sent the samples to Horst Lange-Bertalot, an internationally renowned expert in diatoms from Goethe Universität Frankfort, for species identification. Further examination using SEM confirmed the existence of a previously undocumented species of diatom in the samples. The species is a member of the genus Adlafia. The species name, Adlafia neoniana, reflects its discovery at the NEON field sites.

A. neoniana was found at both stream sites, but was more prevalent in samples from the pristine Rio Cupeyes. That may mean that it could be used as an indicator of human disturbance in similar neotropical environments.

Diatoms are highly responsive to changes in climate and habitat. Different species have evolved to thrive in different ecological niches. Even small changes in average temperatures, precipitation patterns, water chemistry, nutrient content or other ecosystem variables can have a big impact on the makeup of the community of diatoms living in an area.

This makes diatoms uniquely suited for studying the evolutionary and climatic history of a region. The silica shells accumulate in sediments as diatoms die and fall to the bottom of the water column. Sediment cores from the ocean floor or from lakebeds and stream bottoms can be used to study how diatom communities have changed over time. This provides clues about the climate and ecosystem characteristics at different points in time.

Don Charles is excited about the potential of the NEON program to enable monitoring of changes in diatom communities on a continental scale in North America. The NEON project collects water and sediment multiple times each year at aquatic field sites. Investigators can request archival samples from the NEON Biorepository.

"The NEON project will gather water samples in the exact same way in the exact same places every year for thirty years, allowing us to see how diatom communities are changing across the continent," he says. "We've never had data on streams of this consistency and timescale before. It will make it easier to detect seasonal variations or unusual patterns in diatom communities that reflect changes in their aquatic ecosystems."