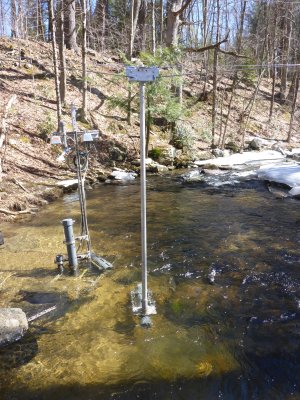 Water quality sensors at some NEON aquatic field sites are getting an infrastructure upgrade!

NEON collects aquatic data at field sites across the U.S., including in wadeable streams. A recently published study in Limnology and Oceanography Methods shows that measurements taken by stream sensors mounted on an overhead cable are as good as measurements taken using the standard in-water monopod design. The new overhead cable mounting infrastructure provides improved sensor uptime and reliability in streams prone to extreme flow changes and shifting channel morphology.

Dr. Robert (Bobby) Hensley, an aquatic biogeochemist on the NEON Aquatic Instrument System (AIS) team, was the lead author on the study, which compared water quality sensor deployment designs in wadeable streams. The study was driven by a need to improve water sensor uptime at "flashy" stream sites – hydrologic flashiness is characterized by rapid increases and decreases in flow during and immediately after a precipitation event.

Flashiness can put extra strain on aquatic sensor infrastructure, resulting in displacement or loss of equipment during flash floods or periods of abnormally high flow. At the same time, periods of abnormally low flows – for example during drought conditions – can change stream morphology enough so that the sensor is no longer ideally located in the stream channel.

NEON collects data on a massive, continent-wide scale; to do so, much of the infrastructure was designed and built from the ground up. Initially, there was a desire to have all designs standardized across all sites within the Observatory. However, every stream is different. Hensley explains, "It's not unexpected that we would occasionally run into problems that require us to rethink our design. The important thing is to ensure that any changes we make in the design of our sensor infrastructure are well-documented and do not create problems for data comparability across sites or across time. We needed to ensure that the different mounting methods for the sensors still resulted in comparable data."

Hensley says that little research has been done to explicitly examine aquatic sensor mounting methods. Directions for aquatic sensor deployment generally specify that they are located in "a well-mixed point…at the center of the channel" or "in the advective zone." Most studies using aquatic sensors do not specify mounting methods used to keep the sensor in the appropriate zone. Hensley and his co-authors on the aquatics team (including Nicolas Harrison, Keli Goodman, Kaelin Cawley, Guy Litt, Bryce Nance, and Nora Catolico) wanted to explicitly document the results of their study to help future researchers make better decisions about mounting equipment design.

An Overhead Cable Design for Improved Sensor Uptime and Adaptability

The original infrastructure design for water quality sensors deployed in NEON stream sites uses a monopod mount, which consists of a simple steel strut driven into the streambed. For many small streams, this low-cost method works well. In flashy stream sites, the monopod can occasionally get dislodged by high waters, fouled or buried by sediment, or destroyed by heavy debris. In addition, the monopod cannot be easily moved once it is set.

"This is a big drawback of the monopod design," says Hensley. "If the stream dries out or meanders, the only way to get the sensor back into the right position in the stream is to physically pull it out and then pound it in somewhere else." During high flow times, servicing the sensors on the monopods could be dangerous or physically impossible.

The solution? An overhead cable system that suspends the sensor in the stream from above instead of mounting it to a fixed support. The system, used in other monitoring sites by the U.S. Forest Service, consists of a cable suspended by posts on either side of the stream and a downrigger that holds the sensors and hangs down into the water. This design provides significant benefits in flashy stream sites:

The study left both monopod and cable sensor systems running in parallel for several months in 2019 and 2020 at two NEON aquatic sites: Lower Hop Brook (HOPB) in Massachusetts and LeConte Creek (LECO) in Tennessee. Comparing the data from both sets of sensors shows that any deviations in sensor data are within the uncertainty range for the sensors, with very few exceptions. These exceptions are related to hydrological conditions which created situations in which the locations of the sensors diverged; for example, in low-flow conditions, the sensor on the monopole might be out of the water or no longer in the advective zone, while the sensor on the cable system could be easily repositioned to remain in a well-mixed point in the channel.

The results show that when sensors were both positioned in the optimal part of the channel, measurements are well within the uncertainty range for the instrument. These results demonstrate that the cable and downrigger system can be deployed at select NEON aquatic sites without impacting data comparability between sites or across time at sites with infrastructure changes.

Best of all, two years of data analysis show a significant improvement in sensor uptime across all aquatic sites. In 2019, sensor uptime across all sites was 70%; this number has improved to 85% in 2021. These numbers reflect not only the water quality sensor infrastructure redesign, but also other improvements across the sites including water level sensor infrastructure, power supply, and river buoys.

This cable infrastructure has been deployed, or is currently in the process of being deployed, at six NEON aquatic sites. In addition to HOPB and LECO, the cable system will be used at McRae Creek (MCRA) in Oregon, Martha Creek (MART) in Washington, Mayfield Creek (MAYF) in Alabama, and Upper Big Creek (BIGC) in California.

All changes in site design are approved by the National Science Foundation (NSF) prior to deployment. Based on the results of the study, the NEON program does not expect that the change from monopod to cable infrastructure will impact data comparability at the affected sites or between these sites and other aquatic sites still using the monopod design. Still, all changes in infrastructure design and methodology are documented in the metadata within the NEON Data Portal.

"If there is one thing the NEON program is really good at, it is documentation," Hensley says. "Any questions researchers might have about this change should be addressed in the documentation we provide." Documentation for aquatic sensor measurements clearly details the mounting design for the sensors. For sensors on the cable mounting system, a horizontal position indicator shows exactly where in the stream the sensor was located when the reading was taken.

"The NEON program is committed to data quality and comparability," Hensley continues. "Completing this study before deploying the new mounting systems ensures that we are not compromising data quality or comparability as we seek to improve uptime. If researchers have questions about the new mounting design that are not answered in the documentation, they can reach out to us for clarification. That is part of our job—answering questions for our user community."