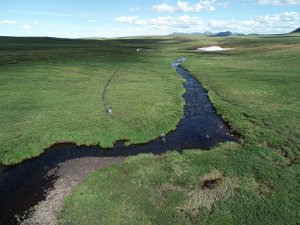 What happens to permafrost when the frost isn't quite so…permanent?

As the Arctic climate warms, many areas where soils were previously frozen year-round are now experiencing cycles of freezing and thawing. Dr. Erin Rooney, who recently earned her Ph.D. from Oregon State University, set out to discover how these cycles are changing the physical structure of Arctic soils—using soil cores from NEON's Toolik Field Station (TOOL). She and her coauthors recently published their findings in Geoderma: Soil pore network response to freeze-thaw cycles in permafrost aggregates.

As the climate continues to change, the Arctic is warming at more than twice the rate as the rest of the globe. One of the results has been a rapid warming of Arctic soils. Permafrost—a thick layer of subsurface soil that has historically remained frozen at all times of the year—is starting to thaw in many places.

But this thawing doesn't happen all at once. Rooney explains, "Permafrost isn't bimodal; it doesn't just go from frozen to thawed. It goes from frozen to freeze-thaw, experiencing seasonal and daily fluctuations in temperature that create cycles of freezing and thawing. This is different from just warming."

Soil temperatures that fluctuate around the freezing point of water (32°F/0°C) create cycles of freezing and thawing as ice turns to water and back again. Because of the physical properties of water, which expands when it freezes, Rooney anticipated that these freeze-thaw cycles would have an impact on soil structure, in particular the network of pores that permeates the soil.

"When you think of soil, you're usually thinking of the material components of the soil—rocks, minerals, organic matter, etc.," she says. "But what I was interested in was the air- and water-filled spaces in the soil, or soil pores. I wanted to understand how freeze-thaw cycles impacted pore morphology—how they are shaped—and how they are connected together." Changes in pore morphology and connectivity could, in turn, impact the ability of the soil to hold water, with potentially significant effects on soil function and plant and microbial communities.

Rooney explains that soil structure can vary widely across regions and soil types. "Soil pores can look different in different soils. Some soils are more like a sponge, with lots of small holes that hold water well. Other soils are more like a tennis racket, with big holes that allow water to drain quickly. I wanted to understand how freeze-thaw cycles might control the pore network. Perhaps we might see a shift from more sponge to more tennis racket."

To study the impact of freeze-thaw cycles on previously frozen soils, she acquired some frozen soil cores from Toolik Field Station, one of NEON's Tundra (D18) field stations in Alaska. Toolik is located in the Arctic foothills of the Brooks Range, nearly 160 miles (155 km) above the Arctic Circle. At this latitude, air temperatures only rise above 32°F/0°C in the brief summer months, and the soil remains largely frozen year-round. This gave Rooney an opportunity to secure soil core samples with minimal freeze-thaw history. Dr. Michael SanClements, a lead research scientist for the NEON program and a coauthor on the paper, helped her secure the samples. Dr. Angela Possinger, then a post-doc at Virginia Tech, was instrumental in employing the R package they used for analysis of NEON soil temperature data.

Three soil core samples were shipped frozen to a laboratory, where subsamples were subjected to five freeze-thaw cycles. Each aggregate was divided into two portions with varying moisture levels (12-16% vs. 28%) so researchers could look at how water content impacted the results. After each freeze-thaw cycle, the samples were analyzed using non-destructive, high-resolution X-ray computed tomography (XCT) imaging. This imaging technique provided a close-up look at the pore network inside each soil sample.

So, did the soil become more spongy or more racket-y? Rooney says, "It's more complicated than that. We can see the soil is changing, but the results varied. It may be that the response varies depending on the initial characteristics of the pore network, the composition of the soil or its particular freeze-thaw history. More research is going to be needed here, but we did find some interesting changes." Overall, they see less connectivity between pores and more singly-connected pores after repeated freeze-thaw cycles. Freezing and thawing also seems to reduce the overall volume of connected water-filled pores. A simplified pore network with fewer connections influences how water can travel through the network and, potentially, how readily available water and carbon are for microbes in the soil. A simpler pore network may also be a less resilient network.

Soil in a Changing Arctic Landscape

Rooney and her coauthors are now continuing the work with a new analysis of soils from both Toolik and Healy (HEAL), an Alaskan Taiga site (D19) located near Denali National Park, about 300 miles south of TOOL. In this study, they examine the impact of freeze-thaw cycles on soil carbon at different depths in the soil cores from the two sites. Using cores from TOOL and HEAL allows them to look for differences in response that may be related to prior freeze-thaw history. While the soil has similar freeze-thaw history at the deepest layers at both sites, the upper layers at HEAL have experienced significantly more cycles of thawing and re-freezing historically.

Understanding how soil will respond to changing freeze-thaw cycles, both physically and biogeochemically, is important for building better models of how the Arctic will respond to climate change. As permafrost thaws, there are growing concerns about the potential for large greenhouse gas emissions from organic compounds that are currently locked in ice. But changes in soil structure and chemistry may also impact the Arctic in other potentially unexpected ways, from its ability to hold moisture to nutrient availability for microorganisms and plants. Studies like these provide a basis to help the research community understand how the Arctic is changing and predict the impact of these changes on plant, animal, and microbial communities in the future.

Rooney is now headed to the University of Tennessee – Knoxville, where she will continue her Arctic research through a fellowship at the Office of Polar Programs, funded by the National Science Foundation (NSF). She says, "NEON basically made my Ph.D.! Working with the NEON program has been a great experience. Having these cores available to me made this research possible."