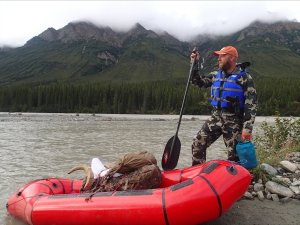 Our "Voices in Ecology" blog series aims to share the invaluable contributions to ecological research from scientists who come from unusual paths and diverse backgrounds across the National Ecological Observatory Network and the U.S. We recently asked Jeb Timm, who grew up in and works in semi-remote Alaska, to share about his path into the field of ecology, his current role, and any advice he has for the next generation of ecologists—particularly those pursuing technical or vocational paths into the field.

Can you tell us a bit about your work with NEON, and your career path?

I've been working with NEON just over two years. I came on to lead the tower crew for D18/19, which encompasses the NEON Domains in Alaska. What I'm mostly doing right now is tower technician work, fleet management, and handling technical infrastructure issues and tasks that pop up.

I've had a non-conventional path to get here. I've never really thought of myself as truly an "ecologist" because my path to get here has been roundabout, and I leaned more on the engineering side of things, rather than science–but I've also been bordering the sciences for a long time. I feel like my position is more of a technician than a scientist. I don't have a degree; I started off in marine biology, following in the footsteps of my parents and friends who were biologists and technicians in the Fish and Wildlife Service and the Park Service in Alaska.

As I started going to undergraduate school, it became evident in Alaska at the time that you're waiting for somebody to retire before you can really get a decent foothold in any of those positions I was hoping for. So, I transitioned away from school into construction, building houses in Fairbanks for 5-6 years and figured that I could spend my free time in the outdoors instead. After that, I took a job working in an underground mine that wasn't producing any ore but was built for training and research. I led the three-year construction of an underground office building, control room, and shop, and I eventually transitioned into being the maintenance manager for that camp. That was an interesting place to work that wasn't really on my radar at first, but I learned a lot of new things there.

From there I moved into renewable energy for a year, doing solar and wind installs; several of them were for science and research groups. One was a big project for a wind and solar self-powered coastal radar unit that tracks sea ice movements and, since building that prototype, I think that research group has four or five of them out now in Alaska and Antarctica. That is where I started getting back closer to science, and I took a position at Toolik Field Station for eight years. Similarly, here I wasn't directly researching or on a project—I was running the Science Support and Maintenance department—but I was working hand in hand with a lot of scientists that needed help with many different aspects of their projects. I was keeping things running around the station like furnaces, trucks, snow machines, and boats; but also putting together towers; fixing wiring for little sites out on the tundra; and supporting researchers throughout. I expanded the department's capabilities a lot; before I came on, they basically kept the generators and trucks running and the lights on. I grew our capabilities to actually go out to the field and help researchers with their technical challenges and help them off season when they had all gone home. I was up there for quite a while before taking my current position at NEON.

What does your typical day or week look like in your current role with NEON?

It's a balance between sitting in front of the computer and then running out to the field to fix things directly. I've found over the years that I prefer to have a wide variety of tasks to keep me occupied. I like the fieldwork, working alongside technical machines and equipment and figuring out all their little intricacies. For our tower (terrestrial) locations, we've got five NEON sites across the northern half of the state – Delta Junction, Healy, Poker Creeks, Toolik, and Utqiagvik. These involve a fair bit of office work, monitoring and troubleshooting the instruments in our towers. We're in the field for probably three days in an average week, and we typically go to two of those sites each week to do preventative and corrective repairs on the equipment there.

I started working for NEON just before the COVID-19 pandemic hit, and with the way the instrumentation subsystem works, we're fortunate to be able to work from home for much of our office work. If I'm not in the field, I'm on the computer checking on or troubleshooting a tower, ordering parts, planning, etc., and that's just as easy and effective to do from home as it is from the office.

Looking back on your career path, are there any key learnings or skills you picked up along the way that helped you land where you are now?

I grew up in a remote area of Alaska, down near Tok. We had a homestead about 30 miles outside of the of the nearest town, living in a relatively large cabin in the woods. Even back in those days, I was always "Mr. Fix-it." My dad would go into work at the Tetlin Nat'l Wildlife Refuge, and I would haul water, fix the generator, four-wheeler, solar panels, etc. I continued that mindset of being the jack of all trades; having that broad background of technical skills was a good fit for Toolik, and a pretty good fit for NEON as well. I really dug into electricity and electrical engineering over the years through my various personal projects as well as my jobs, and although I'm neither an engineer nor a licensed electrician, I can typically hold my own amongst them.

What advice would you give to anyone who's working to enter STEM fields?

The more I learn about NEON, the more surprised I am that I came in at a high-level position with no prior NEON experience and no degree. That said, I'm usually one to kind of undervalue myself, so apparently somebody must have seen the value in me. I wouldn't discount school and having your degree, but I also wouldn't rule out technical or vocational experience because they are valuable and less common right now. When I hear people discuss (or post/tweet) about STEM, I seem to hear a lot of focus on the "S" (which comes with a lot of "M'), but don't forget that "T" and "E" are equally important and valuable. I guess that's more where my focus was, even though I'm working in scientific research my background is technology and engineering. No matter what happens there will always be a need for those skills.

Did you ever experience challenges getting into STEM fields?

As far as major roadblocks or challenges go, I've had no astronomical challenges—I didn't really have a major plan of where I wanted to go, and I ultimately found my way here. I never really made my way into the Fish and Wildlife system, which is partly what pushed me down this path.

Who were your most important influences/mentors in ecological science?

This might be a little cheesy, but my parents originally made me want to get into science and follow that path. Beyond that, it seems like it was mostly me driving myself along. There were people that helped along the way, but I didn't have dedicated mentors that really pushed me in any direction.

Was there anything that attracted you to ecology, versus doing something else in a different industry?

Yes, I knew I wanted a hands-on job in the field. It's less about the pay for me and more about the experience and the location that I value. When I started having a family, I couldn't be at Toolik for weeks and then home for two weeks, constantly back and forth. NEON gave me the balance of still getting out into the field a lot but also still coming home most nights. I got to recapture some of the work-life balance that some people in might struggle with.

I like being involved in the scientific community; the day-to-day reward is in solving problems that keep science running and contribute to a healthier planet.

The challenges have evolved over the years. My biggest challenge at Toolik was the work-life balance. You could have a life when you were up there, but it was a total disconnect from the rest of your life at home. It was great to go out and hike or paddle a river, but you're also totally disconnected from friends and family at home. Since working at NEON, it's been challenging to stay on top of how complicated some of their systems and software are and how to get them to work together in the realm of instrumentation.

Where do you think the ecology industry is headed from a technology and instrumentation standpoint?

For the average researcher, I think things have gotten easier in recent years; new battery technology is great, everything's on wi-fi and Bluetooth, and you have all these things streaming. With NEON, it's more complicated because they have legacy systems and complex integrations that are brilliant, but sometimes also make my head swim. NEON's high data standards mean it's not quite as easy as grabbing an instrument off the shelf and plugging it in, which is where the general instrumentation and sensor suites are going.

Has technological advancement made your job easier or more complex?

As a whole, technology has made things easier. It's very easy now to just pick up an iPhone and get intuitive apps that work well for this kind of work, and more sensors and related components are going that smart tech route. There's still a lot of stuff out there that's based on very old technology, but it's all getting pushed to the point now where it needs to evolve if it hasn't already. There are definitely some aspects that get more complicated with technology over time, but many things are getting streamlined.

What is the coolest or most shocking thing you've worked on in your career in ecology so far?

The strangest thing was probably the underground mine I worked in for three years. Being underground and driving a bulldozer down a solid rock tunnel with three inches of space on either side of the blade is an interesting situation to be in. That said, throughout my career there are a lot of things that have been interesting and unique, but I couldn't put my finger on any strange discoveries. Maybe there have been too many and they've blended.

Is there anything you're working on now that you're excited about, or looking forward to working on in the future?

I enjoy solving problems in general, but with my background I feel like I now have the qualifications to solve bigger infrastructure problems. It's exciting to work on challenges for my specific geography. NEON has 81 sites (47 terrestrial) sprinkled across the country, and while most of them are designed to be the same, some of the characteristics of those sites didn't work well for Alaska. For instance, we're sorting out some plans right now for one of our sites that has issues with permafrost and things sinking into the ground. If the day to day ever slows down enough to think about it, I'd like to explore where I'm at as far as an Electrician and/or Electrical Engineer, and what kind of schooling I might need to make that real.