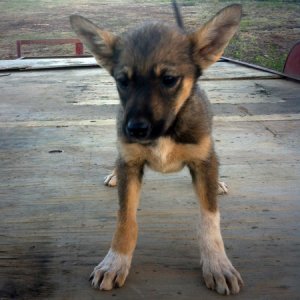 Early this spring, NEON construction manager Frank Ginnie found himself at a crossroads. Well, actually, it was a washed-out road, but it was a pivotal point for Frank: He was tasked with initiating construction at NEON’s Delta Junction site in Alaska (Domain 19) and needed to find an alternate way to access the site.

Fortunately, the family living adjacent to Delta Junction encouraged Frank and other NEON staff to access the trailhead leading to the site from their driveway. Frank has since developed a friendship with the family – John Schandelmeier, Zoya DeNure, their two daughters, one horse and 44 sled dogs, including Neon, an Alaskan Husky puppy.

John and Zoya recently named one of their sled puppy Neon in honor of their newfound friendship with Frank and other NEON staff. Neon is almost three months old and the family has big plans for him. This adorable puppy has already started socialization training and will begin harness training at 6 months. As a puppy, he is known for his big ears and affable, adventurous personality. He usually leads the pack on daily walks and is sometimes referred to as “Chewy” because he has an affinity for chewing shoelaces.

John & Zoya: advocating for the humane treatment of sled dogs

John and Zoya are both professional dog sled racers, or mushers. While the practice of using dogs to pull sleds dates back to 2,000 B.C., the modern sport of mushing is notorious for its intense and physically challenging races, often taking dogs and mushers through blizzards, whiteouts and other extreme weather events.  John ran the Iditarod Trail Sled Dog Race in the 1980s and has raced the 1,000 mile Yukon Quest 19 times, winning it twice and always placing in the top 10. Zoya is a true Renaissance woman – yoga teacher, musher and former model - who raced the Iditarod in 2008, among many other races. As advocates for the humane treatment of sled dogs, John and Zoya also rescue and rehabilitate sled dogs. While they can accommodate 60 dogs, roughly 25 of the 44 dogs currently residing with them are considered “rescues.”

A focus on socialization and positive reinforcement

Through their work with Crazy Dog Kennels, John and Zoya emphasize socialization and positive reinforcement as integral to effective and humane sled dog training. Zoya says, “Dogs are social by nature and we need to encourage that, forever.” With consistent routine, everyday chores, frequent walks, kindness and love, most rescue dogs show behavioral improvements quickly. John and Zoya often place rescue dogs in new homes or on new teams. According to Zoya, “We have had a lot of success over 12 years. We’ve rescued about 160 dogs and about 80% have been placed.” In recent years, Zoya has experienced an increase in inquiries from the international community, including mushers in Norway and Germany, regarding their methods of raising and caring for sled dogs. Learn more about Crazy Dogs Kennels.

As our community grows, we are grateful for the wonderful people who support NEON and we recognize that their graciousness is paramount to our success.

Pushing the Frontiers of Remote Sensing Science with NEON
December 9, 2021
Watching the Diurnal Dance of Woody Plants
January 19, 2022
Domain Digest No. 3: Winter Across the Observatory
January 27, 2022