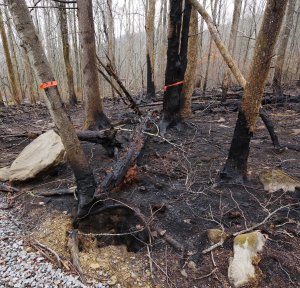 In May 2021, NEON staff participated in a five-session virtual workshop to generate creative strategies and new research collaborations centered on the fire science community. The workshop – hosted by Knowinnovation and supported by the National Science Foundation – was designed to make steps towards improving understanding of different types of fires across temporal and spatial scales, predicting feedbacks between wildfire and living systems, and improving the representation of biological processes in models.

Applications to participate in the workshop were solicited from PI-level researchers, including biologists (molecular to global scale), engineers, Earth scientists, physical scientists, social scientists, and computer scientists. Kaelin Cawley, a NEON research scientist and aquatic biogeochemist, brought the NEON perspective to the event. Here, she shares her first-hand account and takeaways from the workshop.

Collaboration at the workshop

The first day involved working in small groups to introduce ourselves and come up with research questions related to fire science – this was an intense icebreaker. I met people from universities, CyVerse, EarthLab, NASA, USFS, NCAR, and NOAA, among other networks and institutions. Their areas of expertise ranged from large mammal biology to molecular characterization of aerosols and everything in between.

On day two, we moved on to slightly larger groups and came up with more fire research questions. The third day involved adopting research questions from the previous days and "stewarding" them for the group by creating a single-slide, short presentation. On the fourth day, we joined "working groups" with the goal of each creating a two-page document and six-minute final presentation. The final day was wrap-up with the final presentations and discussions of next steps.

A recurring theme and focus of the workshop centered on how the fire sciences community will benefit from more collaboration across disciplines. In particular, I was focused on how NEON can play a part in the discussions and efforts – current and future.

One intriguing idea discussed was a future observatory network – like NEON – dedicated to fire science data and research. If such a fire observatory network were to be created, leveraging existing data collection efforts would be an obvious link to NEON. When some participants expressed concern about potential overlap between this hypothetical observatory and NEON, I pointed out that NEON data are already integrated with other data collection networks such as AmeriFlux. This type of relationship could be a model for this future fire observatory.

There was also a lot of interest in data accessibility, especially for existing long-term datasets that may not be digital. A vision for future data collection efforts highlighted the value of interoperability, which would require standard data collection practices, reliable metadata, and standard formats. NEON's experience and relationships with EDI, DataOne, CyVerse, etc. would be valuable in terms of expertise with data integration.

Many groups were also interested in the idea of collecting pre- and during-fire data. NEON (and other long-term observatories) will likely be a source of pre-fire data in the future, and already are for at least one site. NEON's Mobile Deployment Platforms (MDPs) were also highlighted as an option for collecting data in response to fires in a consistent manner.

At the end of the day, the workshop provided a lot of good thought and direction for the future. All participants were invited to contribute to a roadmap paper that summarizes the outcome of the innovation lab. Additionally, the plan is to have nearly all the working groups publish a paper represented in a special issue of a journal – this is still in early development.

I was really fascinated by the depth and breadth of knowledge represented by the participants. NEON has a role to play in supporting the fire sciences community with the freely available terrestrial and aquatic data that we collect along with our physical infrastructure and assignable assets like the MDP. The outcomes of this innovation lab will also serve to raise awareness of how valuable collaborative science is, and will improve cross-agency partnerships to improve access to datasets and research infrastructure.