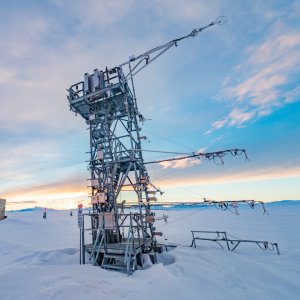 Meet our Tundra field sites. These sites in the far north have some of the most challenging field conditions among our NEON locations—and some of the most spectacular scenery and wildlife. The scientists who work here are sacrificing the comforts of civilization to take a closer look at a fragile ecosystem and learn how it is changing.

The NEON Tundra Domain (Domain 18) is the northernmost of our Domains, covering the north and west coasts of Alaska. It is a treeless landscape, part of a global biome that circles the North Pole. In Alaska, it is bounded by the Brooks Range to the south and Arctic Ocean and Chukchi and Bering Seas to north and west.

Ecologically, the Arctic Tundra is defined by its location above the northern tree line and its cold, dry climate. It is also characterized by the presence of continuous permafrost, a subsoil layer that remains frozen year round.

The climate of the NEON Tundra Domain is heavily influenced by the Artic Ocean and the Chukchi and Bering Seas. These bodies of water, and the amount of sea ice they accumulate in the winters, impact temperature and precipitation patterns across northern and western Alaska.

Vegetation here is dominated by short shrubs (primarily birches and willows), sedges, grasses and low-stature herbaceous vegetation. Local flora and fauna take full advantage of a summer growing season that can be as short as 50-60 days. In the summer, all of the Domain sees at least 1day of 24-hour daylight and temperatures average 50-54°F (10-12°C), with highs typically in the 60s or 70s. In the winters, temperatures hover around -4°F (-20C) and may dip to -50°F (-45°C). The city of Utqiaġvik (also known as Barrow), located in the North Slope Borough along the northern shore of Alaska, endures 67 days of full darkness in the winter. Precipitation varies across the Domain, with Nome averaging 17 inches of rainfall and 77 inches of snow annually and Utqiaġvik typically receiving less than 5 inches of rain and 39 inches of snow each year.

Biodiversity in the Tundra is low compared to most other Domains, but the Alaskan Tundra is home to a number of iconic animal species, including polar bears, caribou, wolves and arctic foxes. Small mammals such as lemmings and voles also thrive here. In the summer, you can find many species of migratory birds, including gulls, loons, sandpipers and terns. Bowhead whales swim off the northern and western shores and are an important part of the economic and cultural life of native Alaskan communities.

The Barrow Environmental Observatory is located at the northernmost tip of the Domain near Utqiaġvik (or Barrow), a small city on the northern shore of Alaska with roughly 4,200 inhabitants. Indigenous Iñupiat tribes still engage in traditional hunting and fishing activities, including annual Bowhead whale hunts. There are no roads to the area; all personnel and supplies must be flown in.

The BARR field site encompasses 50 km2 (19.3 square miles). The area is dominated by the grasses, sedges and low shrubs typical of Arctic ecosystems. Small lakes and ponds dot the landscape, along with characteristic polygonal patterns formed by repeated freezing and thawing of water in the "active layer" of soil that overlays the permafrost layer.

There is a long history of ecological research in this area, dating back to early explorations by American and European researchers in the 1800s. An official environmental observation station was established here in 1882. In 1947, the U.S. Office of Naval Research established the Naval Arctic Research Laboratory (NARL) as a permanent research station. The station, now known as the Barrow Arctic Research Center (BARC), is now maintained by UIC Science, a business unit of the Ukpeagvik Iñupiat Corporation. The BARR field site shares lab space with BARC. The International Tundra Experiment (ITEX) also has a co-located site here, and the Long Term Ecological Research Network (LTER) has established a site nearby. The history of ecological data collection in the area, and the co-location of other research efforts, promises to add depth and richness to the data collected by the NEON program.

The other three field sites are clustered together along the southern edge of the North Slope, in the foothills of the Brooks Range near the Arctic National Wildlife Refuge. The Toolik Field Station is on land managed by the Bureau of Land Management. This is a remote wilderness area, 400 miles away from Fairbanks, the closest city. The Dalton Highway (also known as the Haul Road or Pipeline Road), which traverses the middle of the state from Fairbanks to Prudhoe Bay, provides access to the area.

The area's complex glacial history has created a rich terrain with diverse soil types and topography, including a number of small streams and lakes. The geological history of the area has resulted in different ecological niches with soil layers of various ages and distinct characteristics that influence vegetation patterns and animal biodiversity. There is also a rich archeological history left by the native nomadic tribes who have tracked the caribou migrations across the North Slope for thousands of years.

Birch and willow, along with sedges and grasses, are the dominant vegetation types. Caribou migrate through the area during part of the year. This is also a contact zone for polar bears and grizzly bears, representing the southernmost part of the polar bear range. Mosquitos are exceptionally abundant (and hungry, according to our field crews).

Research efforts in the area date to the mid-70s, when the completion of the Haul Road opened the area up for access to researchers. The Toolik Field Station was established at this time with support from the National Science Foundation (NSF) and Department of Energy (DOE). LTER established a research site in the Toolik Lake area in 1987 and has maintained an active presence in the area ever since. Toolik is also an ITEX permafrost research site.

Together, the three NEON field sites cover terrestrial, lake and stream ecosystems within the Toolik Lake watershed. All sites are now fully operational. The TOOL terrestrial site produces 109 data products and has an observation tower in addition to vegetation, mammal, bird, insect and soil observation and sampling plots. TOOK and OKSR will each generate 78 aquatic data products from both sensors and observational sampling.

The Arctic is considered to be one of the most fragile ecoclimates in the world. Low overall biodiversity and harsh conditions magnify the impact of environmental shocks. In addition, there is evidence that climate in the Artic is warming at a faster rate than at other latitudes.

Changes in the Arctic have the potential for an outsized influence on the rest of the world. As temperatures warm, summer sea ice is rapidly disappearing, impacting marine climates and possibly changing the rate of climate change by reducing the albedo (amount of energy reflected or absorbed) of the Arctic region. Melting glaciers and land ice are raising sea levels and changing coastlines. There are also concerns that as permafrost melts, organic material now trapped in ice will release stored carbon into the atmosphere. All of these changes have tremendous implications for ecosystems and communities around the world.

The intrepid field research teams at our Tundra sites are on the front lines of observing these changes. Over the next 30 years, data gathered from the NEON Tundra field sites will be used to monitor changes in temperature and precipitation and the rate of change over time. The data will also illuminate how these changes impact species range and abundance and overall biodiversity in the Tundra Domain. The NEON data will help the research community build better models of climate and ecosystem change in the Artic and understand how these changes may impact all of us globally.