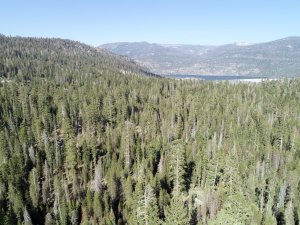 This blog series explores each of the 20 NEON ecoclimate Domains and the field sites within them. This is the last installment, but stay tuned for more Domain news in Domain Digest!

The Sierra Nevada Mountains span 640 km (400 miles) of eastern California, rising from near sea level to more than 4400 m (14,500 ft.). The rugged mountain range is home to 20 wilderness areas; two national monuments; and Yosemite, Sequoia, and Kings Canyon National Parks. They also host all five of the NEON field sites in D17, the Pacific Southwest. The sites are located across the largest elevation gradient in the Observatory, providing a unique opportunity to collect data from the foothills to the higher elevations. They also represent very different land-use models, from cattle grazing to timber production to wilderness recreation.

The Pacific Southwest is entirely contained within California, encompassing 213,800 km2 (82,540 square miles). It is bounded by the Pacific Ocean on the west and the Great Basin to the east. The Central Valley stretches through the center of the state, in between the Sierra Nevada and the Coast Range.

The two mountain ranges, along with the Central Valley in between, are the defining features for this Domain. Climate and ecosystem characteristics are heavily influenced by the mountains and the proximity of the Pacific Ocean. In the Central Valley and western Sierra Nevada Mountains, the climate is largely Mediterranean with hot, dry summers and cool, wet winters. At higher elevations the climate shifts to alpine, with snow accumulating throughout the winter months. Most of the Central Valley is dependent on this snowpack for water.

The Central Valley is one of the most heavily human-impacted areas in the U.S. The central part of the state was once a diverse mosaic of grasslands, prairie, oak savanna, and riparian wetlands, but has been greatly altered by agriculture and the introduction of non-native herbaceous vegetation, predominately non-native annual grasses. More than 230 different crops are grown in the Central Valley, including tomatoes, almonds, grapes, cotton, and asparagus.

In the Sierra Nevada range, where the NEON field sites are located, climate and ecosystems change along the elevation gradient. On the western slope, oak savannas in the lower foothills give way to montane evergreen forests at higher elevations. Lower montane forests, from 760 – 2100 m (2500 – 7000 ft.), feature predominantly Ponderosa pine and Jeffrey pine along with scattered groves of the iconic giant sequoia. In the upper montane forests, 2100 – 2700 m (7000 – 9000 ft.), lodgepole pines, and red firs dominate the canopy. On higher slopes, vegetation consists of subalpine chaparral dominated by low-growing manzanita or ceanothus, while the alpine ecosystems above timberline are characterized by scant populations of herbaceous vegetation with little to no overstory that eventually give way to barren peaks. The eastern side of the range is warmer and drier due to the "rain shadow" effect, which squeezes moisture out of the air as it rises over the peaks.

A diverse range of animal species make their homes in the foothills and mountains of the Sierra Nevada range. Mule deer, black bear, coyotes, and smaller mammals such as rabbits, skunks, grey squirrels, chipmunks, and marmots are just a few of the mammal species found here. There are also dozens of species of endemic and migratory birds found across the domain, including northern goshawk, bald eagle, great grey owl, California spotted owl, pine grosbeak, mountain chickadee, and mountain quail. The southern Sierra Nevada range is home to the California golden trout, the state fish.

The NEON field sites build on a rich history of research in the Sierra Nevada Mountains by the Critical Zone Observatory (CZO) and other organizations and principal investigators. While not all the colocated CZO sites are still active at the NEON field site locations, researchers are able to tap into these historical data and compare them with data collected by NEON over the next three decades. The combined data provide a robust view of how these ecosystems have changed and are continuing to change over time.

At 210 – 520 m (690 – 1700 ft.), the San Joaquin Experimental Range is at the lowest level of the elevation gradient spanned by the NEON field sites. It is nestled in the foothills of the Sierra Nevada Mountains about 40 km (25 mi.) north of Fresno. SJER sits in an open oak woodland dominated by blue and interior live oak, gray pine, and manzanita, with an understory consisting of non-native annual grasses, forbs, and legumes. The surrounding area is primarily agricultural, including rangeland, vineyards, and orchards.

The Experimental Range was established in 1934 by the U. S. Forest Service as the first range research station in California. It was designated as a UNESCO Biosphere Reserve in 1976. Cattle graze SJER, and research at the site has focused on ecosystem processes and grazing in the oak woodland. The site also hosts research by students from several local universities and colleges. In 2009, the Southern Sierra Critical Zone Observatory (SSCZO) erected an eddy covariance flux tower to monitor meteorological processes near the site of the present-day NEON tower – measurements continue as part of NEON.

Soaproot Saddle and Upper Big Creek, about 56 km (35 mi.) northeast of Fresno, represent the middle elevation for the Sierra Nevada sites and are situated along the rain-snow transitional area of the gradient. Both sites sit within the Kings River watershed. This area was famous for its Ponderosa pine forests, with vast stands interspersed with incense cedar, canyon live oak and California black oak, and an understory of dense manzanita. However, pine bark beetles, drought, and recent wildfires have heavily impacted the forest ecosystem.

Significant tree mortality and subsequent wildfires at Soaproot Saddle have resulted in drastic changes across the site. The NEON field science team has been working to track changes in vegetation structure and composition and map the locations of dead trees using lidar and hyperspectral imaging. The loss of the Ponderosa pine overstory has a profound impact on the landscape and results in heavy fuels, contributing to recent wildfires that burned more than 50% of the site. The resulting landscape consists of barren burned patches, large areas of manzanita, poison oak and ceanothus, and some remaining stands of trees. Data from the NEON program will help ecologists monitor the rapidly changing landscape.

Located just north of Soaproot Saddle, Upper Big Creek is a low-gradient wadable stream. It has a highly variable flow, typical of snowmelt-dominated mountain streams in the Sierra Nevada, with peak flows in spring that can be up to 21 times its base flow rate. The riparian zone is comprised of a mixed deciduous-conifer forest with an abundance of chain ferns in the understory. The creek hosts a number of native species, including rainbow trout and the western pond turtle, a species of concern.

Lower Teakettle and Teakettle Creek are located in the Sierra National Forest, about 80 km (50 miles) east of Fresno. They are the highest elevation sites in the D17 gradient, with elevations from 1900 – 2807 m (6230 – 9210 ft.). At this elevation, the forest canopy is dominated by red and white fir, Jeffrey pine, and lodgepole pine. The evergreen forests are dense, with limited understory featuring shade-tolerant herbaceous plants. Bush chinquapin, mountain whitethorn, and manzanita can be found on some slopes, and large granite outcrops occur throughout the sites. Almost all precipitation at this elevation falls as winter snow, with the snowpack exceeding 3 m (10 ft.) some years and persisting into June.

The forests at both sites are beginning to be impacted by drought and mountain pine beetle infestation. In addition, warmer winters have led to more precipitation falling as rain than in the past. The effects of these phenomena are most noticeable in the overstory species, specifically the firs and lodgepole pines. Affected trees rapidly deteriorate in health and topple over, leaving an open canopy and layering the forest floor with coarse woody debris. Accelerating the effects of drought and infestation by beetles, afternoon wind gusts from late-season thunderstorms can cause entire stands of stressed trees to fall. The data collected at these sites allow ecologists to quantitatively capture changes in overstory dominance and track shifts in ecotype throughout the life of the Observatory.

Within the larger terrestrial field site sits the U.S. Forest Service's Teakettle Experimental Area, which contains the Teakettle Creek site. The Experimental Area was established in 1938 to research watershed management in the Sierra Nevada Mountains. In 1958, it was designated as an experimental forest to study the impact of different timber harvesting patterns on water yield; these experiments continue to this day.

Teakettle Creek is a high-gradient wadable mountain stream with a watershed of 3.0 km2 (740 acres). The site sits at 2133 m (7000 ft.) and is a headwaters stream of the North Kings River. Like Upper Big Creek, it has a highly variable flow rate and is heavily dependent on snowmelt. Peak flows at this stream can be as much as 40 times baseflow. The site is located in a mixed conifer forest with vegetation in the land-water interface being dominated by dogwood and willow species. The primary substrate is bedrock, with a large diversity of aquatic bryophytes, lichens, and macroinvertebrate species, all indicators of good water quality and healthy freshwater ecosystems.

Monitoring Tree Mortality, Drought, and Fire in the Pacific Southwest

Climate change and human activity have combined to put significant stress on Southern Pacific ecosystems. The most visible sign of change in California is vast swaths of dead and dying trees. The U.S. Forest Service estimates that more than 129 million trees have died in California's national forests since 2010.

For the conifer forests of the Sierra Nevada Mountains, prolonged drought conditions and a population explosion of damaging bark beetles have combined to decimate millions of acres of pine and fir forest. Bark beetles are native to California, but warmer winters have allowed populations to flourish. At the same time, the Pacific Southwest has seen intensifying drought conditions over the last two decades. The region experienced the longest period of sustained drought in recorded history from 2011 – 2017 and entered another period of intensive drought in 2020-21. Trees stressed by drought conditions are weakened and less able to survive a bark beetle infestation, leading to higher levels of tree mortality.

Tree mortality is dramatically changing ecosystems in the Sierra Nevada Mountains. The loss of canopy trees such as Ponderosa, lodgepole, and Jeffrey pine create an opening for other types of vegetation cover to take over, including shrubs (such as manzanita) and grasses. It is unclear how these landscapes will evolve over time.

Stands of dead trees and new biomass from fast-growing woody shrubs and grasses create the perfect conditions for the large wildfires that have plagued the region in recent years. While fire has always been part of the native ecosystem, these conditions allow fires to spread further and become hotter, higher, and more intense, threatening even fire-resistant species such as the giant sequoia.

Drought and a warming climate also impact the amount of snowpack that accumulates in the mountain peaks. The snow-rain transition zone is slowly moving up the mountainsides, and a smaller snowpack is accumulating on the peaks during the winter months. This has critical implications for the entire watershed of the western Sierra Nevada range and the Central Valley, which relies on snowmelt for much of its water supply through the spring and summer months. Water availability is expected to be a growing issue for the region in the coming years and could have profound impacts on agricultural productivity. The NEON field sites are well positioned to collect data along the elevation gradient for the Sierra Nevada watershed.