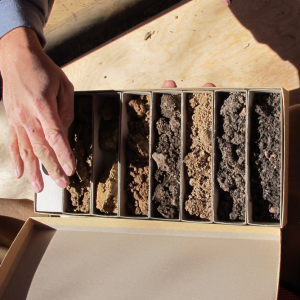 How are ecosystems across the continent changing over time? What are the relationships between climate, ecosystem composition and soil organic matter? And how are soil composition and carbon storage potential likely to change in the future? The answers lie under our feet.

Adrian Gallo, a Graduate Research Assistant in the Oregon State University Department of Crops and Soil Sciences, is investigating soil organic matter as part of a study funded by the National Science Foundation (NSF). The study, "A continental-scale assessment of the linkages between soil organic matter stabilization mechanisms, controls, and vulnerability," is digging up answers that could help rewrite the book on soil.

Soil is a complex mixture of mineral particles, nutrients, air, water, living organisms and organic matter. Soil organic matter (SOM) is the fraction of the soil made up of plant or animal tissues in various stages of decomposition, animal waste products, and living and non-living microbial biomass. When plants and animals die in a terrestrial environment, their tissues are broken down by microbes into carbon-based molecules that are utilized by living plants as they grow. SOM is an important measure of soil fertility; productive agricultural soils contain 3% - 6% SOM.

The amount and type of SOM in the soil are directly related to the composition of the vegetation that lives and dies in the immediate area. The majority of SOM comes from the dominant plants growing in the ecosystem. Some of the organic material comes from the stems, leaves or needles that grow above ground and gradually become buried as they die and decompose. The remainder comes from the roots that decompose in place when the plant dies. The resulting carbon compounds in the soil can be thought of as "shoot carbon" and "root carbon."

Root carbon and shoot carbon each have a slightly different chemical structure. Carbon compounds from different types of plants—e.g., grasses vs. conifers vs. deciduous trees—also have their own chemical signatures, or biomarkers. The structure of the carbon-based molecules acts like a fingerprint to identify the types of plants that decomposed to form the SOM, and whether the carbon compounds came from the roots or the shoots of the plant.

Analyzing these biomarkers can tell us a lot about how the composition of the ecosystem has changed over time. As you dig deeper into the soil, you are going back in history. A deep soil core provides a geologic record of SOM composition that can go back as far as 20,000 years into the past. By looking at the structure of the carbon molecules at different depths, we can get an idea of the types of plants that were present in the ecosystem at different points of time.

Adrian and his team are using soil samples from the NEON program to create an inventory of SOM that spans the continent.

The samples come from 42 of NEON’s 47 terrestrial field sites. During the construction of NEON’s field sites, boreholes were made at each site for installation of soil carbon (CO2) sensors. The resulting soil cores, which average 1 m. deep, were shipped to the Oregon State University for analysis under the NSF grant.

"Working with the NEON project solved one of the biggest logistical challenges for a project of this scale, which was 'how do you get the soil?'" says Adrian. "Instead of physically traveling to locations across the continent and systematically gathering soil, we can use the soil cores already produced by NEON." The NEON project uses strict protocols for gathering soil samples, ensuring that the soil cores would be collected using the same methods at each location for quality and comparability.

Using data from the NEON project had another advantage, too. NEON field sites are strategically located within 20 ecoclimatic zones (or NEON domains) across the country, from tropical Puerto Rico to the Alaskan Arctic Tundra to the Hawaiian Islands. Soil cores from the 42 NEON terrestrial field sites represent ecosystems from all of the biomes in North America.

Adrian and his team analyzed the soil cores using gas chromatography–mass spectrometry (GC-MS), an analytical method that allows them to separate and identify the different carbon compounds found in the sample and determine the relative quantity of each. The resulting data show the types and relative quantities of different carbon compounds at different horizons (layers) of the soil cores from each site. This allows researchers to correlate SOM composition with vegetation types and abundance at each site.

They now have a continental-scale inventory of SOM composition in different biomes across North America. In addition to enabling researchers to answer important questions about the relationships between current ecosystem structure and soil organic matter composition and stability, the data set will provide a baseline for further research into ecosystem change and carbon dynamics.

The NSF study, of which Adrian's research is one part, is gathering evidence that could change our understanding of how carbon cycles in soil. This, in turn, could improve our climate models.

Soil is the most important terrestrial carbon sink. A carbon sink is a part of the natural environment that stores carbon and keeps it out of the atmosphere. An estimated 2500 gigatons of carbon are held in soil globally, dwarfing the amounts of carbon currently in the atmosphere or residing in terrestrial organisms. Understanding SOM, which represents the organically-derived portion of carbon in the soil, is critical to our understanding of the carbon cycle.

Carbon continuously cycles between the soil, living things and the atmosphere. This cycle is heavily influenced by factors such as soil moisture, temperature and microbial activity.  As temperatures warm and precipitation patterns change, this will impact the carbon storage potential of the soil. Part of the goal of this study is to better understand how climate change may impact carbon storage potential and stability in different soil types and ecosystems.

Unlike carbon cycling in rocks and oceans, which operate on geologic timescales, the carbon pool held by soil is cycling on human timescales. Better models may lead to improved soil management practices that could increase carbon uptake potential.

"What we are finding in the field of soil science research is that we know a lot less than we thought we did," Adrian explains. "We were using essentially the same analytical methods for more than 100 years, and our predictions and climate models were built using that data. It's only in the last 25 years that we have had instruments sensitive enough to test some of these predictions, and in some cases we've found that our models are completely wrong. This research will help us reevaluate those old paradigms and build better models of how carbon cycles in soils."

As a next step, Adrian hopes to see other researchers examine the microbial side of the equation. Half of each soil core was frozen before Adrian's team began their analysis. These frozen soil samples are waiting for a microbiologist to analyze them for microbial activity and community composition. Combining analysis of the living communities within the soil with Adrian's abiotic analysis would provide important insights into the impact of microbial activity on SOM and carbon cycling.

In the meantime, Adrian and his team are continuing work on their continental carbon compound inventory. They have requested soil samples from "megapits" dug at each NEON terrestrial field site. The megapits collect soil at each soil horizon down to a depth of 2 m or more at most sites. Analyzing these deeper layers will provide a look further back into the ecological history of each site.

"The questions we're looking at really are the perfect melding of biology, chemistry, physics and geology," Adrian says. "This study has the potential to completely change our understanding of soil carbon cycling and how all of these processes work together."

What's That Beetle? Ask the Algorithm
May 26, 2021
Exploring Interrelationships Between Plant Biodiversity, Forest Structure, and Climate
October 18, 2021
Can This Tracer Molecule Help Us Understand the Carbon Cycle?
November 8, 2021