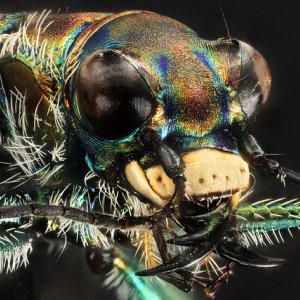 What can a ground beetle tell us about the environment? Quite a lot! This diverse and ubiquitous family of insects provides a window into environmental health and change.

Erik Oberg, a biologist at Yellowstone National Park, is leading an ambitious beetle-biodiversity initiative on the Northern Range of the park. The Yellowstone Phenology Project collects data on Carabid beetles and other environmental indicators at seven sites across a 4,000+' elevation gradient. Erik has recruited a cadre of citizen scientists to collect, classify and count beetles collected at the sites.

Carabids, or ground beetles, are a diverse family of insects found in nearly every terrestrial ecosystem on earth, with 40,000 species identified worldwide and more than 4,000 in North America. Many species are carnivorous, sitting at the top of the invertebrate food chain. Studying Carabid diversity, abundance and range may provide insights into what is happening with the invertebrate species they prey on as well as the numerous bird and small mammal species that rely on them for food. Because insects have short life spans, they are also highly sensitive indicators of environmental change.

Carabids have the advantage of being fairly easy to capture and count (though with so many similar species, accurate species identification can be challenging). Erik and his team collect the beetles in pitfall traps using the same collection protocols developed for use at NEON’s terrestrial field sites.

The Yellowstone Phenology Project (YPP) began the beetle inventory in 2018 and will continue through 2019 and 2020. The three-year study will provide baseline data on Carabid diversity and abundance across the elevation gradient in Yellowstone's Northern Range that will be invaluable for future researchers. "We're not drawing any conclusions with these data," Erik explains. "What we are doing is establishing a baseline that will allow future researchers to assess how beetle populations are changing over time. For example, are new species of beetles moving in at lower elevations? Are species now present mainly at higher elevations leaving the park?"

The seven sites are located along an elevation gradient that begins in Gardiner Basin (5,300’) and ends at the peak of Mt. Washburn (9,600'), rising over 4,000 feet along the way. The sites were originally established by Yellowstone GIS Specialist Ann Rodman in 2010 as part of a pollinator study. At the time, NEON was nearing the end of its design phase. Ann chose these study locations with the vision that when NEON field sites completed construction, the study locations would bracket a planned NEON field site. The sites now function as climate change indicator sites for Yellowstone, with a broad range of sensors and data collection efforts aimed at monitoring key indicators of climate change such as temperature, soil moisture and snow depth. NEON's Yellowstone Northern Range (YELL field site) sits near the midpoint of these sites as part of NEON’s D12: Northern Rockies ecoclimatic domain.

Partnering with the NEON Program

Erik collaborated with Ann to build on her vision by adding Carabid data to the other data that are collected at the indicator sites. Because the team uses NEON's beetle collection protocols, data will be comparable between YELL and the YPP sites located up and down the elevation gradient. The project gives park managers and researchers an exciting opportunity to compare Carabid distribution and abundance paired with meteorological data at different elevations and see how beetle communities are changing across the gradient over time.

Erik reached out to the NEON science team during the planning phase of his project. He has a long connection with the NEON program and was part of a team instrumental to finalizing the NEON permit and application to conduct research inside Yellowstone National Park. Once YELL was established, he saw an opportunity to build on NEON's research by using their protocols across a broader cross section of the park. "We wanted to make sure that data we are collecting are accurate and comparable. The NEON protocols are scientifically valid and were easy to implement with our volunteers."

The NEON program provided training resources and guidance to the YPP team. In addition to using the same pitfall trap design, YPP used a stratified random spatial design to select the collection plots within each site. This method, also used by NEON, ensures that human bias does not influence plot selection and results in samples that are more representative of the habitats found within each site.

Katie LeVan, a Research Scientist for the NEON program specializing in insect ecology and data, says, "This was a very collaborative process between NEON and the Yellowstone team. Erik reached out to us to see how his research questions and interests fit into what NEON was already doing in Yellowstone. We were able to support him with the sampling design so he can use the NEON protocols with very minimal modifications. His work represents a deep dive into Carabid populations in the park that goes beyond what we are able to do with a single site."

The Power of Citizen Science

As valuable as the Carabid data will be for the scientific community, the project would never have gotten off the ground without the hard work of Erik's team of citizen scientists. In 2018, "Carabid Crew" volunteers put in more than 1,340 hours of effort to collect beetles from the pitfall traps and sort, pin, label and catalog more than 3,900 specimens. Undergraduates and graduate students from seven different universities participated. Two volunteers in Louisiana dedicated hundreds of hours to mounting and cataloging specimens. In addition to collecting beetles, field volunteers also recorded plant phenology observations (the timing of events such as leafing, flowering and leaf drop).

Erik says, "It would be impossible to do this project without our volunteers—I don't have a line item in my budget for Carabid collection. We are lucky to have a team that is very dedicated and excited to be bringing new knowledge to science through their efforts. It's impossible to have a bad attitude at work when working with our volunteers."

Engaging the general public in science is an important part of the missions for both Yellowstone and the NEON program. Erik says, "We need this research to inform management decisions, but we also want people to understand why we are doing it. Our citizen science programs get people engaged and foster increased scientific literacy and support for park stewardship."

Katie says, "It's exciting to see so many people now engaged with science through projects like Erik's or through apps like iNaturalist or eBird. Of course, when working with untrained non-scientists we always have to consider the accuracy and reliability of the data. But in many cases, the data being generated by citizen scientists has proven to be highly reliable. Participants are adding incredibly valuable data that the scientific community would not be able to collect otherwise, especially when it comes to things like species distribution."

The Carabid Crew is now engaged in data collection for the 2019 field surveys. The 2019 team has grown to 37 volunteers ranging from ages 8 (the son of another park ranger) to 77 (a retired laboratory assistant).

Over the winter, teams will count and catalog the species collected. A contract entomologist will check their work and identify Carabids to species. Volunteers are also starting to take a look at the bycatch (non-Carabid invertebrates caught in the pitfall traps). One student at Montana State University–Bozeman is cataloging ant species collected at the sites. This year, volunteers began capturing high-definition images of Carabids using a macrophotography studio set up by the Canon Foundation. The stunning images are publically available on Flickr.

Katie says, "This is exactly the kind of collaboration I would like to see more of as the NEON program matures. We have a lot of resources available for researchers that they can leverage for their own projects and interests. Our infrastructure, samples, data and protocols are available to support a broad range of research initiatives."

The Yellowstone Phenology Project will continue at least through 2020.

Interested citizen scientists can get involved in YPP or other volunteer opportunities through Yellowstone Forever.