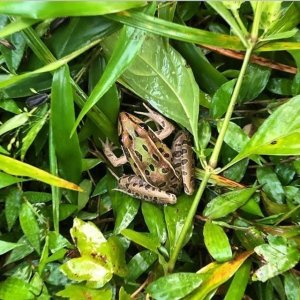 Happy World Wildlife Day! At the NEON program, we are lucky enough to share our workspaces with all kinds of wild creatures, great and small. And while we only collect data on a few (mosquitos, ticks, beetles, small mammals, birds, and fish, to be specific), we celebrate them all.

Here are some of our favorite #WildlifeWednesday photos taken by our dedicated field staff at our sites over the last year. Enjoy!

The Eastern Meadowlark (Sturnella magna) is a favorite of our technicians at the Disney field site in central Florida. You can hear its distinctive clear whistle throughout the site. Meadowlarks live here year-round in open fields and pastures, feeding on a mix of insects and seeds. During mating season, the male shows off the black "V" on his breast and defends his territory by singing.

Crikey! This beautiful American alligator (Alligator mississippiensis) was caught taking an evening stroll in the Disney Wilderness Preserve. Alligators are a common reptile seen by technicians in our Southeast field sites. The American alligator was once considered to be endangered but is now thriving throughout the wetlands of the southeastern U.S., primarily Louisiana and Florida. The alligator is an apex predator, sitting at the top of the food chain in its swampy habitats. Adult males can reach 10 to 15 feet in length and weigh up to 1000 pounds. During mating season, they use infrasound calls—below the lower range of human detection—to attract females.

At first glance you may think these are monarch butterflies, but these are actually Gulf fritillaries (Agraulis vanilla), or "passion butterfly." One way you can distinguish these orange and black butterflies apart is by looking for the Gulf fritillary’s silver scales beneath its wings. These butterflies often interact with technicians at the Jones Ecological Research Center (JERC) field site, landing on their hands, hats, or colorful field gear. A common butterfly in the southeast, they can be seen year-round near their host plant, passionflower. Host plants are vital for butterfly communities to lay their eggs on and to provide food sources for caterpillars.

The southern leopard frog (Lithobates sphenocephalus) is native to the Eastern United States and the most commonly seen species of frog in Florida. Like other leopard frogs, it is named after the spots on its back, which are reminiscent of a leopard's spots. Its call can be heard throughout the site and is described as a "chuckling croak" or a "squeaky balloon" sound.

Can you spot the cobito? This Caribbean hermit crab (Coenobita clypeatus)—also known as the soldier crab—is well camouflaged against the rocks at our Puerto Rican Guanica field site. Native to the southern Florida and the islands of the west Atlantic and Caribbean, these arthropods are herbivores and scavengers, so keep a close watch on your food in the forest. They are also one of the most common hermit crab species sold in pet stores—but we think this one looks happier here in his (her?) native habitat.

Stop and smell the flowers! This bumblebee pauses on a thistleflower at the STEI field site in our Great Lakes Domain. There are more than 250 species of bumblebee found mainly in temperate climates across the globe. They are important pollinators for both crops and wildflowers. Their numbers are now declining due to habitat loss, pesticide use and (for some species) pathogens. People can help local bees in their communities by planting native flowers and reducing the use of lawn and agricultural chemicals.

These two eastern collared lizards (Crotaphytus collaris) were found sunning and protecting their territory at KONZ in Kansas. The name "collared lizard" comes from the one or two black bands on their neck and shoulders, which give the appearance of a collar. These lizards are found in dry, open regions throughout Mexico and the south-central United States. Males are brightly adorned with blue and green hues. Can you guess which is a male?

What looks like a tadpole but has legs and external gills? It's a neotenic salamander! This western tiger salamander (Ambystoma mavortium) was captured and released by technicians in North Dakota while collecting fish data. Neotenic salamanders retain larval characteristics such as gills (the neck frills in the photo) that allow them to remain in aquatic form rather than metamorphizing into their adult terrestrial form. Environmental neoteny is fairly common among western tiger salamanders, which are found throughout the western U.S. and Canada.

If you are around Yellowstone and Grand Teton National Parks, keep an eye and an ear out for Clark's Nutcracker (Nucifraga columbiana), sometimes called the woodpecker crow. These birds are extremely talkative, with a loud and varied repertoire of sounds. In flight, they can be recognized by their distinctive black and white wings and tail feathers. Clark's nutcracker is considered a keystone species in Yellowstone due to their integral relationship with the whitebark pine. The birds cache thousands of pine seeds each season.

Did you know that elk (Cervus canadensis) are the most abundant large mammal at the NEON field site at Yellowstone? These majestic giants are one of the largest land mammals in North America, with males weighing up to 500 kg (1,100 lb.). Bull elk engage in ritual sparring during the fall mating season. You may also hear the males bugling during this time—a haunting sound!

This mama moose was photographed nursing her twin calves at our Healy field site in the summer of 2020. Healy, near Denali National Park in Central Alaska, is part of our Taiga domain. The moose (Alces alces) is the largest and heaviest deer species still in existence and among the largest North American land animals. They inhabit boreal forests throughout Alaska, Canada and parts of New England (predominantly Maine). Moose are typically solitary animals outside of mating and mothering. These calves will stay with their mother for up to 18 months, until she starts her next estrus cycle.

Say aloha to our little friend! This Succineid snail was found at our PUUM site in Hawaii. The Succineidae snail family is often referred to as amber snails, and live in damp habitats like which can be found in Hawaii. There are more than 40 documented species of Succineids endemic to the Hawaiian Islands, meaning they are found nowhere else in the world. However, snail diversity in Hawaii has been devastated by invasive species and habitat loss. Once described to "line the trees like Christmas lights," these jewels of the forest are a lot less common than they used to be.

Hailing from the Big Island, meet the Hawaiian Hawk (Buteo solitarius), or 'io. 'Io are small Buteo hawks endemic to Hawaii, and today can only be found on the Big Island of Hawai'i. As the only resident hawks in Hawai'i, they live in a wide range of habitats on the island, from high-elevation forests all the way down to sea level. They hunt birds, small mammals, and even large insects and lizards. With such a significant range of habitat types and food sources, 'io are important to consider when studying ecosystem dynamics. 'Io are seen fairly regularly in Pu'u Maka'ala Natural Area Reserve (PUUM) but are usually observed soaring or perched on branches of trees. This adult 'io chose a roadside fencepost instead.