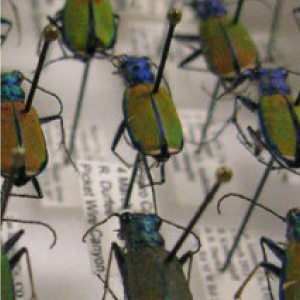 A primary goal of the NEON project is to collect and provide data that is the basis for research that connects the major drivers of global change to responses in the environment through long term, continental-scale data collection. Through coordinated sampling of terrestrial organisms at terrestrial field sites and aquatic organisms at aquatic sites, NEON measures community responses of select taxa (called ‘sentinel taxa’). Each sentinel taxon was chosen as a representative group within a larger community, providing data useful for making predictive models to forecast ecosystem change. Accordingly, the NEON project samples and studies ground beetles (Coleoptera: Carabidae) at terrestrial field sites. Ground beetles are an important family of invertebrates known to strongly influence downstream ecological processes such as agricultural pest control.

Why carabids? Prior studies have found that these beetles are an excellent indicator species of arthropod biodiversity, environmental change, land use and land management. Moreover, the ground beetle family is large, widespread, and associated with the ground layer, rather than any particular plant community, ensuring that some ground beetles are present in virtually all terrestrial habitats over the entire extent of the observatory. The family is particularly abundant and diverse with over 3,000 species within the spatial extent of NEON. Finally, the group is well-known taxonomically, facilitating high-quality identifications by NEON staff.

In addition to being widespread and relatively unambiguous to identify, ground beetles are also useful for assessing changes in major biological phenomena such as the species-latitudinal gradient, a trend where the number of species found increases as you move from higher latitudes (near the poles) towards lower latitudes (near the equator). Lower latitudes are resource-rich year round and support larger populations than the colder poles; ultimately, the abundance of resources and intense competitive pressure causes speciation and leads to greater diversity in the tropics. Therefore, the distribution of beetle species across the gradient may reflect changing resources availability due to climate shifts.

How does NEON collect beetles?

NEON samples ground beetles using pitfall traps. This established and widely used sampling method was selected to maximize comparability across time and between sites within the observatory and to be comparable to external data sets.

Pitfall traps are a passive collection technique using a small container (approximately 11 cm in diameter and 7 cm deep) that is sunk into the ground with its rim flush with the soil surface. Insects and other arthropods are captured when they fall into the trap. NEON pitfall traps are filled with propylene glycol, a colorless and unscented preservative. Because propylene glycol is not an attractant, the number of ground beetles or other arthropods that fall into the trap represent a snapshot of the invertebrate community. As an additional protective measure, every pitfall trap is covered with a 20x20 cm hard plate installed 1.5 cm above the trap entrance to restrict access to all but the smallest vertebrates.

At each terrestrial site, four pitfall traps are deployed at each of 10 distributed plots for a total of 40 traps per site. Traps are in place continuously during the entire growing season and sampled (emptied and re-set) every two weeks at both core and relocatable sites. This strategy prioritizes even sampling across sites to maximize comparability of ground beetle data among all NEON sites.

The traps collect a wide range of arthropod taxa and measure the “activity density” in the area, a measure that combines both arthropod abundance and movement. Ground beetles in pitfall samples are identified to species by trained technicians to provide an estimate of ground beetle abundance and biodiversity in each domain each year. The traps also collect large numbers of many common ground-dwelling arthropods in addition to ground beetles. The non-ground beetle arthropods are termed “bycatch” and will be archived and available to researchers for additional analyses.

NEON’s initial ground beetle sampling began in 2013 at two sites, and since then, 13 sites were sampled in 2014, 27 sites in 2015 and 35 sites in 2016. Although still preliminary, the 2015 data (Fig. 1) are already showing variation in beetle richness, the number of species found in an area, and abundance, the number of individuals in an area.

The NEON project has also detected species in new areas. According to Robert Davidson at Carnegie Museum of Natural History, two carabid species found in North Dakota (Notiophilus aquaticus and Syntomus americanus) by our NEON staff may represent the first ever collection of these species in North Dakota (so-called ‘state records’). As NEON continues its collections, more state records are expected. NEON will also contribute to fleshing out the less resolved areas of carabid taxonomy by archiving specimens for research use. NEON has already archived hundreds of specimens from an as-yet unnamed species within the subgenus Abacidus from Virginia and dozens of specimens (representing at least six undescribed species) within the subgenus Celiamorphus from the southeastern US at the Carnegie Museum of Natural History.

A novel approach to identification verification and quantifying uncertainty

When it comes to accurate ground beetle identification and maintaining data quality, there are two main hurdles. First, how does NEON ensure that trends in diversity data reflect actual sampling results versus indicating increased diversity due to technicians gaining identification skills? Second, how do data users know if NEON’s identifications are reliable?

To ensure consistent and accurate beetle identification across sites, a subset of ground beetles from each domain each year are sent to external facilities for taxonomic verification. This subset is selected in order to represent some individuals from every morphospecies as well as individuals that are rare or difficult to identify. In addition to external verification, NEON technicians also quantify their own uncertainty when identifying specimens. This allows data users to evaluate data quality and more confidently select data to use in their analyses.

And just how accurate are NEON technicians at identifying beetles? As part of commissioning, the process of assuring that all systems and components of the observatory are designed, installed, tested, operated, and maintained according to operational requirements, a random set of specimens with high levels of identification certainty were sent out for taxonomic verification. The commissioning requirements were for NEON technicians to correctly identify at least 95% of the samples at the genus level and 80% correctly at the species level. For the 2014 and 2015 samples, identification accuracy easily surpassed these requirements (Fig 3).