In this tutorial was originally created for an ESA brown-bag workshop. Here we present the main graphics and topics covered in the workshop.

How Does LiDAR Works?

For a full tutorial on rasters & raster data, please go through the Intro to Raster Data in R tutorial which provides a foundational concepts even if you aren't working with R.

A raster is a dataset made up of cells or pixels. Each pixel represents a value associated with a region on the earth’s surface. 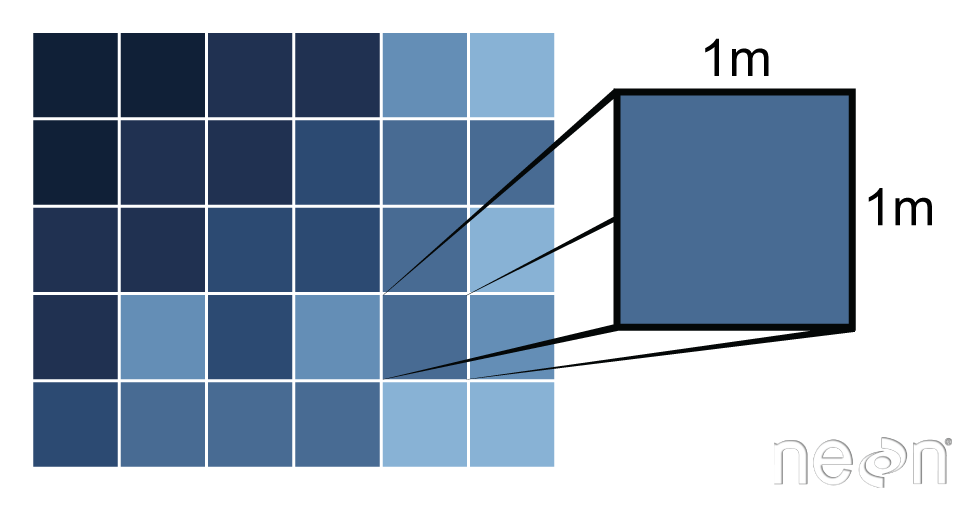 The spatial resolution of a raster refers the size of each cell in meters. This size in turn relates to the area on the ground that the pixel represents. Source: National Ecological Observatory Network

For more on raster resolution, see our tutorial on The Relationship Between Raster Resolution, Spatial Extent & Number of Pixels.

There are several ways that we can get from the point data collected by lidar to the surface data that we want for different Digital Elevation Models or similar data we use in analyses and mapping.

Basic gridding does not allow for the recovery/classification of data in any area where data are missing. Interpolation (including Triangulated Irregular Network (TIN) Interpolation) allows for gaps to be covered so that there are not holes in the resulting raster surface.

Interpolation can be done in a number of different ways, some of which are deterministic and some are probabilistic. 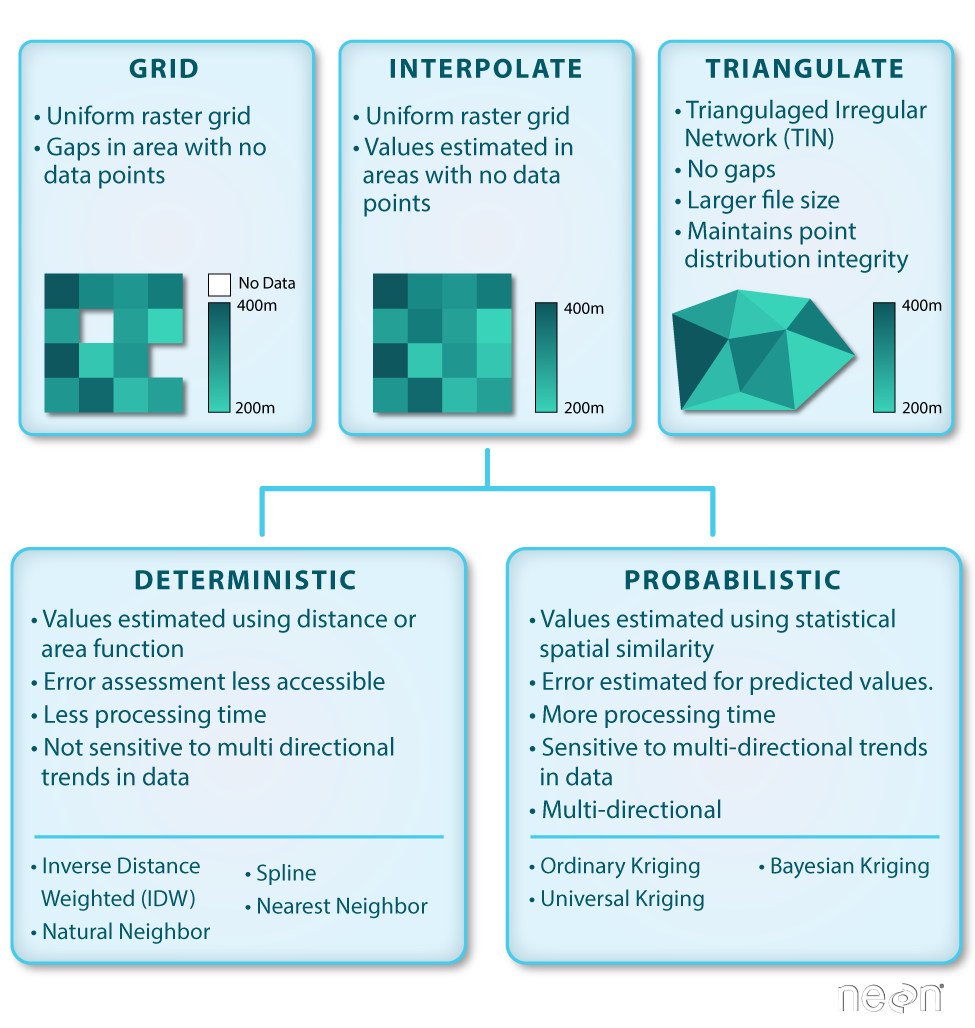 When converting a set of sample points to a grid, there are many different approaches that should be considered. Source: National Ecological Observatory Network

When creating a raster, you may chose to perform a direct gridding of the data. This means that you calculate one value for every cell in the raster where there are sample points. This value may be a mean of all points, a max, min or some other mathematical function. All other cells will then have no data values associated with them. This means you may have gaps in your data if the point spacing is not well distributed with at least one data point within the spatial coverage of each raster cell. 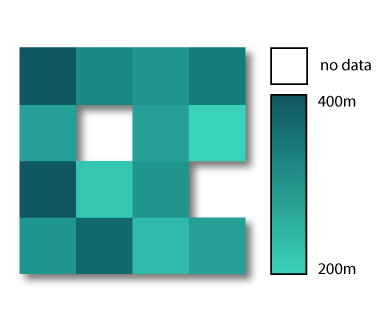 When you directly grid a dataset, values will only be calculated for cells that overlap with data points. Thus, data gaps will not be filled. Source: National Ecological Observatory Network

We can create a raster from points through a process called gridding. Gridding is the process of taking a set of points and using them to create a surface composed of a regular grid.

Spatial interpolation involves calculating the value for a query point (or a raster cell) with an unknown value from a set of known sample point values that are distributed across an area. There is a general assumption that points closer to the query point are more strongly related to that cell than those farther away. However this general assumption is applied differently across different interpolation functions. 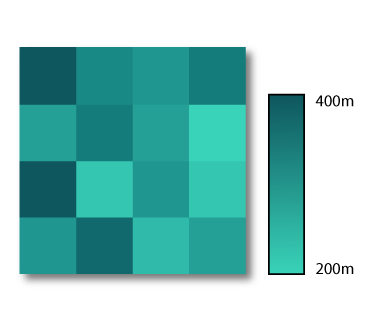 Interpolation methods will estimate values for cells where no known values exist.

There are two main types of interpolation approaches:

Different methods of interpolation are better for different datasets. This table lays out the strengths of some of the more common interpolation methods.

We will focus on deterministic methods in this tutorial.

Let's look at a few different deterministic interpolation methods to understand how different methods can affect an output raster.

Inverse distance weighted (IDW) interpolation calculates the values of a query point (a cell with an unknown value) using a linearly weighted combination of values from nearby points.

IDW interpolation calculates the value of an unknown cell center value (a query point) using surrounding points with the assumption that closest points will be the most similar to the value of interest. Source: QGIS

The solid line represents greater power and the dashed line represents lower power. The greater the power, the more localized an affect a sample point's value has on the resulting surface. A smaller power value yields a smoothed or more averaged surface. Source: J. Abrecht, CUNY

The impacts of power:

IDW is good for:

IDW is not so good for:

Spline interpolation fits a curved surface through the sample points of your dataset. Imagine stretching a rubber sheet across your points and gluing it to each sample point along the way -- what you get is a smooth stretched sheet with bumps and valleys. Unlike IDW, spline can estimate values above and below the min and max values of your sample points. Thus it is good for estimating high and low values not already represented in your data.

Spline interpolation fits a surface between the sample points of known values to estimate a value for the unknown cell. Source: J. Abrecht, CUNY

There are two types of curved surfaces that can be fit when using spline interpolation: 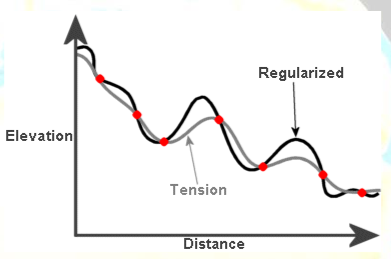 Spline is good for:

Spline is not so good for:

Natural neighbor interpolation finds the closest subset of data points to the query point of interest. It then applies weights to those points to calculate an average estimated value based upon their proportionate areas derived from their corresponding Voronoi polygons (or see figure below for definition). The natural neighbor interpolator adapts locally to the input data using points surrounding the query point of interest. Thus there is no radius, number of points or other settings needed when using this approach.

A Voronoi diagram is created by taking pairs of points that are close together and drawing a line that is equidistant between them and perpendicular to the line connecting them. Source: Wikipedia

Natural neighbor interpolation uses the area of each Voronoi polygon associated with the surrounding points to derive a weight that is then used to calculate an estimated value for the query point of interest.

Natural Neighbor is good for:

Natural Neighbor is not as good for:

The Triangulated Irregular Network (TIN) is a vector based surface where sample points (nodes) are connected by a series of edges creating a triangulated surface. The TIN format remains the most true to the point distribution, density and spacing of a dataset. It also may yield the largest file size! 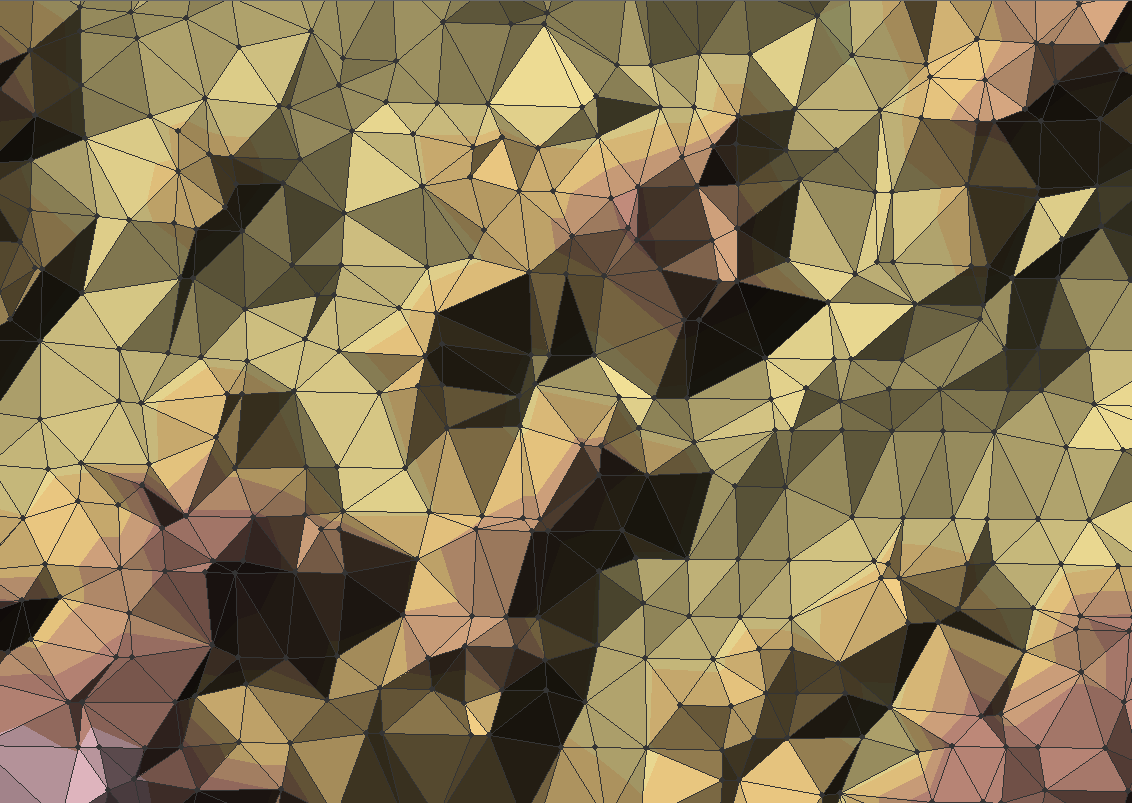 A TIN creating from LiDAR data collected by the NEON AOP over the NEON San Joaquin (SJER) field site.

Interpolation in R, GrassGIS, or QGIS

These additional resources point to tools and information for gridding in R, GRASS GIS and QGIS.

The packages and functions maybe useful when creating grids in R.

The following commands may be useful if you are working with GrassGIS.