In this tutorial, we will open and plot point, line and polygon vector data stored in shapefile format in R.

You will need the most current version of R and, preferably, RStudio loaded on your computer to complete this tutorial.

More on Packages in R – Adapted from Software Carpentry.

Set Working Directory: This lesson assumes that you have set your working directory to the location of the downloaded and unzipped data subsets.

An overview of setting the working directory in R can be found here.

R Script & Challenge Code: NEON data lessons often contain challenges that reinforce learned skills. If available, the code for challenge solutions is found in the downloadable R script of the entire lesson, available in the footer of each lesson page.

Vector data are composed of discrete geometric locations (x,y values) known as vertices that define the "shape" of the spatial object. The organization of the vertices, determines the type of vector that we are working with: point, line or polygon.

**Data Tip:** Sometimes, boundary layers such as states and countries, are stored as lines rather than polygons. However, these boundaries, when represented as a line, will not create a closed object with a defined "area" that can be "filled".

Geospatial data in vector format are often stored in a shapefile format. Because the structure of points, lines, and polygons are different, each individual shapefile can only contain one vector type (all points, all lines or all polygons). You will not find a mixture of point, line and polygon objects in a single shapefile.

Objects stored in a shapefile often have a set of associated attributes that describe the data. For example, a line shapefile that contains the locations of streams, might contain the associated stream name, stream "order" and other information about each stream line object.

We will use the rgdal package to work with vector data in R. Notice that the sp package automatically loads when rgdal is loaded. We will also load the raster package so we can explore raster and vector spatial metadata using similar commands.

The shapefiles that we will import are:

The first shapefile that we will open contains the boundary of our study area (or our Area Of Interest or AOI, hence the name aoiBoundary). To import shapefiles we use the R function readOGR().

When we import the HarClip_UTMZ18 shapefile layer into R (as our aoiBoundary_HARV object), the readOGR() function automatically stores information about the data. We are particularly interested in the geospatial metadata, describing the format, CRS, extent, and other components of the vector data, and the attributes which describe properties associated with each individual vector object.

**Data Tip:** The *Shapefile Metadata & Attributes in R* tutorial provides more information on both metadata and attributes and using attributes to subset and plot data.

Key metadata for all shapefiles include:

We can view shapefile metadata using the class, crs and extent methods:

Our aoiBoundary_HARV object is a polygon of class SpatialPolygonsDataFrame, in the CRS UTM zone 18N. The CRS is critical to interpreting the object extent values as it specifies units.

We view the attributes of a SpatialPolygonsDataFrame using objectName@data (e.g., aoiBoundary_HARV@data).

In this case, our polygon object only has one attribute: id.

We can view a metadata & attribute summary of each shapefile by entering the name of the R object in the console. Note that the metadata output includes the class, the number of features, the extent, and the coordinate reference system (crs) of the R object. The last two lines of summary show a preview of the R object attributes.

Next, let's visualize the data in our R spatialpolygonsdataframe object using plot(). 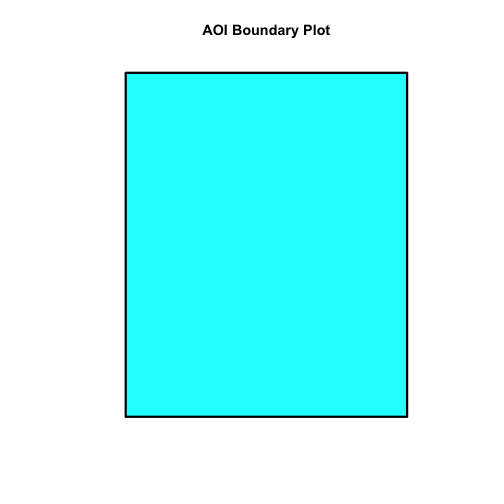 The plot() function can be used for basic plotting of spatial objects. We use the add = TRUE argument to overlay shapefiles on top of each other, as we would when creating a map in a typical GIS application like QGIS.

We can use main="" to give our plot a title. If we want the title to span two lines, we use \n where the line should break. 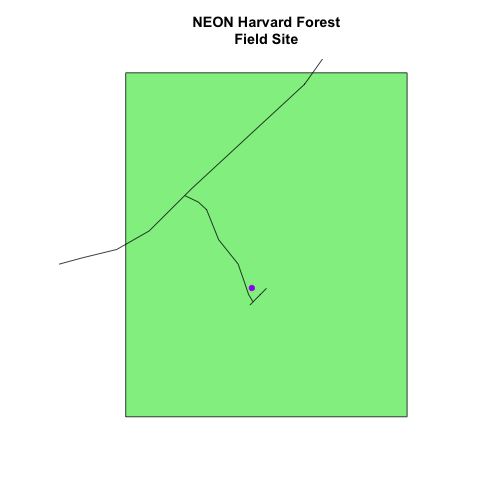 You can plot vector data layered on top of raster data using the add=TRUE plot attribute. Create a plot that uses the NEON AOP Canopy Height Model NEON_RemoteSensing/HARV/CHM/HARV_chmCrop.tif as a base layer. On top of the CHM, please add:

Be sure to give your plot a meaningful title.

For assistance consider using the Shapefile Metadata & Attributes in R and the Plot Raster Data in R tutorials. 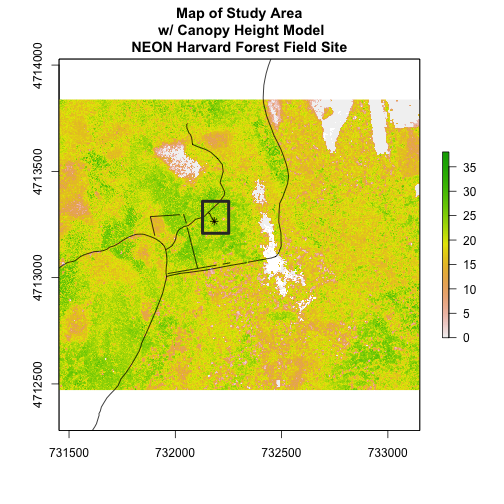 For more on parameter options in the base R plot() function, check out these resources: