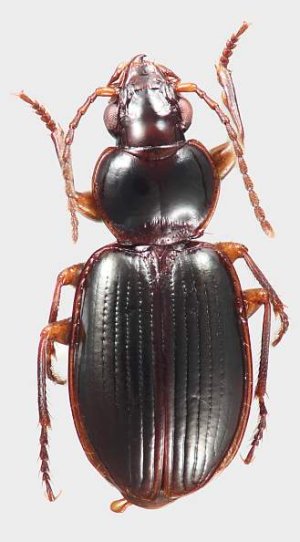 It's always exciting when a new species is identified at a NEON field site. At Pu'u Maka'ala Natural Area Reserve (PUUM) in Hawai`i, researchers have verified the discovery of two previously undescribed species of carabids (ground beetles). Dr. Kip Will of the University of California - Berkeley and Dr. James Liebherr of Cornell University recently published their findings in The Pan-Pacific Entomologist: "Two new species of Mecyclothorax Sharp, 1903 (Coleoptera: Carabidae: Moriomorphini) from the Island of Hawai'i."

The two new species are both members of Mecyclothorax, a genus of ground beetles most diverse on volcanoes in the Hawaiian Islands and the Society Islands of French Polynesia. The newly named Mecyclothorax neonomas and Mecyclothorax brunneonubiger bring the number of known Mecyclothorax species in Hawai`i to 241 (many of them previously described and cataloged by Liebherr). Their discovery could provide new insights into the evolutionary history of the genus.

The Road to Discovery

Will is one of two researchers contracted by the NEON program for definitive identification of carabids. He studies carabids worldwide and provides identification for the NEON program for carabids found in the western United States, including Hawai`i. Liebherr is one of the premier U.S. experts on carabids, especially those of the Hawaiian Islands. Over the last 20 years, he and his students have created the most extensive and authoritative guide to Hawaiian carabids to date. Will completed his Ph.D. thesis at Cornell under Liebherr's tutelage.

Will first discovered the suspect specimens in a group of carabids sent to him for identification from PUUM. "When the NEON samples arrived for identification, it was my first time seriously working with Hawaiian carabids," he says. He quickly realized that two of the specimens did not match species already described in Liebherr's publications. "I said, hey, Jim, your key doesn't work—these must be something new!" He sent the specimens to Cornell, where Liebherr confirmed the identification of two new species. Discovering new carabid species is par the course for these researchers, but these are the first new Hawaiian carabid species identified with NEON samples.

Hawai'i is where Will first found his love of the insect world. He served eight years in the U.S. Army prior to starting his scientific career; while stationed at Schofield Barracks in Hawai'i in the 1980s, he started volunteering with the Bishop Museum in Honolulu, which had a very active field entomology program at that time. He was smitten with the diversity of the insect world. "They had a fantastic collection there, and the researchers were very enthusiastic," says Will. "They brought me on as a volunteer and took the time to explain everything."

After leaving the Army, Will earned a degree in entomology from The Ohio State University and eventually a Ph.D. from Cornell. He spent much time in the southern hemisphere, chasing carabids through South Africa, South America, and Australia. "Carabids give me an excuse to go everywhere. Wherever they are found, I'll be there," he says. Finding these two new species in the Hawaiian samples brings him full circle to his entomology roots on the islands.

Will's primary interest in entomology is phylogenetics, or the evolutionary relationships among species. Carabids in general, and Mecyclothorax in particular, provide excellent opportunities for phylogenetic studies. According to Liebherr, the 241 known species of Mecyclothorax in Hawai`i evolved over a period of 1.2 – 1.9 million years. "They aren't messing around when it comes to diversification," he says.

Studying the differences between the species and the habitats they are found in can provide insights into how they evolved and diversified. Many species are found in tiny evolutionary niches. Over the course of Liebherr's field studies in Hawai'i, he and his students identified 116 species of _Mecyclothorax_ on a single volcano, including 74 species new to science. Volcanic islands, like those found in Hawai'i, have numerous "microhabitats" that promote rapid speciation for insects like Mecyclothorax. For example, individuals of a species might prefer streamside or aquatic habitats, leaf litter habitats on the forest floor, or arboreal microhabitats in epiphytic mosses or plants. Also, species on oceanic islands (especially wingless species such as those in the Mecyclothorax genus) often exhibit diminished dispersal abilities, and so each volcanic ridge may support species different from those on an adjoining ridge. The two new species discovered at PUUM, for example, are among those more likely to be found in terrestrial habitats within the forest, which makes them more susceptible to capture in the pitfall traps used by the NEON program.

Different species of Mecyclothorax are recognized by distinct morphology, striations evident in their exoskeletons, the species-specific form of the genitalia, and other physical characteristics, which also provide clues about the relationships between species. Will says, "The average person would just say there's another shiny little brown beetle, but each species is unique based on their characteristics." Species with more similar markings or morphology may be more closely related. Will explains, "We can look at the current distribution of species for clues as to how the taxa of particular fauna assembled over time. Looking at where we have representatives of related species on different volcanoes, and knowing the ages of each volcano, can tell us how they diversified and how they came to be where they are."

Why Care About Carabids?

Carabids are found in practically every ecosystem across the globe, with an estimated 35,000 – 45,000 species worldwide and nearly 2500 known species in the U.S. alone. They are also good environmental indicators. Many species are highly specialized for their habitats and very sensitive to changes in the environment. These characteristics make them ideal subjects for NEON data collection. The NEON program collects ground beetles in pitfall traps at terrestrial field sites. Studying carabid populations across geographic regions and over time can provide insights into climate and ecosystem change and ecosystem dynamics.

Will explains, "The NEON program made a smart choice in sampling carabids. They are a group of insects that can be uniformly sampled to get at both shorter- and longer-term dynamics. They show just enough sensitivity to ecosystem and climate change—they're tough enough to survive some change, but sensitive enough to show a response we can learn from."

Carabids are found in large numbers in many habitats and play important roles in the ecosystem. Most are predators or scavengers. Some are the apex predators of the insect world in their domains, making some species very useful for bio-pest control. Many are highly specialized, with unique adaptations that allow them to go after specific prey such as hard-shelled snails or poison-spewing millipedes. These differences were what made carabids so fascinating to Will. "They are really important players in the ecosystem. If you want to have a robust ecosystem, they are part of that."

In the years to come, the NEON program's carabid data will allow researchers to keep a close eye on shifting populations in Hawai'i and across the country. One issue Will plans to keep an eye on in Hawai'i is the impact of invasive carabid species on native Hawaiian species—for example, the invasive Trechus obtusus, which has shown up in large numbers in pitfall traps at PUUM. "That's the beauty of consistent sampling year after year," he says. "It allows us to see how populations ebb and flow and where additional native or non-native species are moving in or native species are getting pushed out. NEON lets us see these shifts over time."