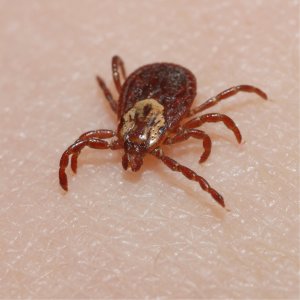 If you've been out walking in the woods or tall grasses this summer, you may have brought home an unwelcome passenger on your clothes or person. Ticks—and the diseases they carry—are on the move throughout much of the United States. The National Science Foundation’s NEON project is tracking the spread of tick species and pathogens as part of our Terrestrial Organismal Sampling data collection efforts.

The Rising Toll of Tick-Borne Pathogens

Ticks are one of the primary vectors for insect-borne pathogens, spreading a number of diseases that impact humans as well as livestock and wildlife. One of the most notorious diseases that ticks spread to humans is Lyme Disease, a potentially serious illness characterized by a distinctive bulls-eye rash that can lead to long-term neurologic, cardiac and rheumatologic effects if left untreated. More than 300,000 cases were reported in the U.S. in 2016. Other diseases carried by ticks include Spotted Fever Rickettsiosis (including Rocky Mountain Spotted Fever), Anaplasmosis, Babesiosis, Ehrlichiosis and Tularemia. Specific species of ticks are associated with each disease, and diseases are concentrated in different regions of the U.S.

The Centers for Disease Control and Prevention (CDC) track the spread of tick-borne diseases. This tracking has shown that many of these diseases, including Lyme, are increasing in prevalence and spreading into new areas. This creates significant public health concerns.

The spread of tick species, and the pathogens they carry, may be linked to changes in climate, land use and vegetation patterns. For example, warmer winter temperatures may allow more ticks to survive or impact their activity levels in some parts of the U.S. In other areas, invasive grasses may be contributing to the spread of tick species into new areas.

Part of the goal of the NEON project is to tease out these interrelationships between causes of change and responses. Data from NEON’s tick sampling protocols will help researchers understand how different species of ticks respond to changes in climate patterns, land use, and the spread of different plant and animal species. NEON field scientists gather data to monitor the presence and abundance of different tick species at the NEON’s terrestrial field sites and determine which pathogens these ticks are carrying.

NEON's tick sampling protocols began at select terrestrial field sites in 2013. As of summer 2018, tick sampling is now active at all terrestrial field sites, from Puerto Rico to the Arctic Circle (excluding Hawaii). This includes sites in the far north where ticks have never been found; if they do spread to these areas, NEON scientists will be among the first to know.

Sampling for ticks involves pulling a drag cloth through a defined sampling area and counting the ticks that are picked up along the way. Ticks are identified by:

A subset of the collected ticks is sent to the Laboratory of Medical Zoology (LMZ) at the University of Massachusetts Amherst, a national tick testing lab, that conducts DNA analysis to identify which pathogens each specimen is carrying. NEON collects tick data to answer a number of questions:

As of September 2018, NEON researchers have collected more than 200,000 ticks (including 4,780 adults and 15,882 nymphs) from 5,893 individual drags at 45 terrestrial sites. Out of the collected ticks, 5,649 nymphs have been analyzed for pathogens. Others have been preserved for future research. These data, along with a majority of the legacy data dating back to the original 2013 collections, are now available on the NEON Data Portal.

Monitoring the Spread of Ticks and Tick-Borne Diseases

The NEON project is testing ticks for 13 pathogens. So far, 10 of these diseases have been identified in collected ticks using DNA analysis. Monitoring pathogens carried by ticks directly, rather than through reported human cases, will provide important data to supplement the CDC's monitoring efforts. These data could act as an early warning signal when diseases spread into new areas, so the public health community can be on the lookout for human cases and increase the chances that diseases will be properly detected and diagnosed.

The NEON tick data are already being used by a number of researchers across the country. Will Pearse, an Assistant Professor in the Biology department at the University of Utah, is using archived specimens to put together a trait database and explore relationships between species diversity and traits among ticks. Geraldine Klarenberg at the University of Florida is using NEON data to explore the factors that play a role in the abundance and spread of ticks in different areas

As more data are collected in the coming years and decades, researchers will be able to explore complex interrelationships between climate, biodiversity, ecosystem and terrain characteristics, land management methods, and the spread of ticks and the pathogens they carry. For example: how do prescribed burns impact tick populations and pathogen activity? Where should we expect to see ticks migrating based on climate predictions? How are tick migration patterns related to the migration of other plant and animal species? Where are humans most at risk for encountering ticks carrying dangerous diseases?

These studies could help to inform public health efforts, land management practices, and disease containment strategies. Ticks may be on the move, and carrying their pathogens with them. The NEON project is poised to track these movements and provide the data people need to respond.