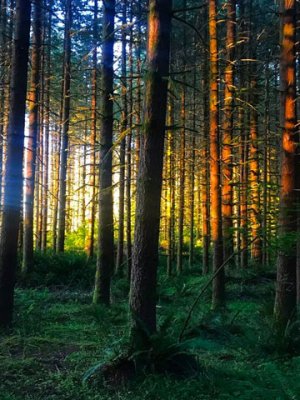 Is North America facing a bird biodiversity crisis? The North American Bird Conservation Initiative reports that more than one third of the continent's 1,454 avian species are threatened or endangered. Land use changes and habitat loss have resulted in an overall loss of biodiversity across much of the country.

However, there is surprisingly little information about the specific landscape characteristics that support a thriving and diverse avian community. Luis Carrasco, a post-doctoral fellow at the National Institute for Mathematical and Biological Synthesis (NIMBioS) and the Department of Ecology and Evolutionary Biology, University of Tennessee, Knoxville (EEB UTK), is working to change that.

Luis, funded by the National Science Foundation (NSF) through NIMBioS, and his co-investigators at EEB UTK conducted a study that leveraged both remote sensing and classical field observation data from the NEON program. The researchers used lidar data from the NEON Airborne Observation Platforms (AOP) along with breeding landbird counts from five NEON terrestrial field sites to explore relationships between vegetation structure and density and bird biodiversity in forested ecosystems.

Vegetation structure is only one of the factors that impacts bird species diversity in an area, but it is an important one. Forested areas have a mix of different vegetation types including the tall trees that make up the forest canopy as well as layers of shrubs, mosses, ferns and other plants that make up the understory. These plants provide food sources, breeding and nesting habitats, and protection from predators.

The type, density and structure of plant life in a forest will influence the bird species that live there. Different species thrive under different conditions, with some preferring dense, mixed underbrush and others preferring a more open habitat.

Luis and his co-authors (Xingli Giam, Monica Papeş, and Kimberly S. Sheldon, faculty at EEB UTK) wanted to get a clearer understanding of how the structural characteristics of the forest influence patterns in bird biodiversity. Most previous studies had looked only at the canopy height when evaluating the structural heterogeneity of vegetation. Luis wanted to look deeper, below the forest canopy and into the understory, to see how vegetation structure at different vertical layers of the forest is related to the bird species that live there.

A Peek Beneath the Forest Canopy

LiDAR—or Light Detection And Ranging—is a remote sensing system that uses light emitted from a rapidly firing laser to measure things on the ground. NEON collects lidar data by mounting the system on to a light aircraft. Pulses of laser light travel to the ground and are reflected back to the sensor system when they bounce off of vegetation, buildings or other landscape features. Measuring the time it takes for the photons from the laser pulse to bounce back to the sensors provides information about the elevation and structure of landscape features.

When NEON conducts an airborne data flight survey, the lidar system passes over a forested landscape, some of the light energy will bounce off the top of the forest canopy, allowing us to map the height of the trees that make up the top canopy. But some of the light passes through the treetops and reflects back off the leaves, branches and other structures within the canopy. In this way, lidar provides a detailed 3D picture of the vertical and horizontal structure of the forest. Researchers can use lidar data to peek beneath the treetops and see how dense the vegetation is at different vertical layers within the forest.

Luis and his team used discrete return lidar data collected in 2016 from five forested NEON sites in the Northeast (D-01), Mid-Atlantic (D-02) and Appalachians & Cumberland Plateau (D-07) ecoclimatic domains. The NEON program collects remote sensing data, including lidar, during annual flight surveys over each field site, which are scheduled during the period of "peak greenness." These data are freely available to researchers and the public through the NEON Data Portal.

Using the lidar data, the team created detailed models of vegetation structure for each of the five field sites. By using lidar returns from different elevations within the forest, they were able to calculate Leaf Area Density (LAD) and estimate overall vegetation density at different vertical layers of the forest. The results were validated with traditional field observations.

Once the 3D vegetation maps were created, the researchers looked at breeding landbird counts from the NEON field observations at each site. They compared the number of species recorded at each sample plot with the vertical and horizontal structure of the vegetation.

The results of the study suggest that protecting species diversity will require more than simply setting aside land for conservation. When it comes to bird biodiversity, what matters is not just the number of acres of forest preserved but the types and density of plants and the overall structure of the understory. For maximum species diversity, the forest needs a variety of habitats within the canopy and understory, including areas with dense underbrush and many young plants and more open areas with mature trees and less groundcover.

Luis says, “This has important implications for conservation. If we know that environmental heterogeneity is a key driver for biodiversity, we can focus our conservation and land management efforts towards maintaining these heterogeneous landscapes.”

Moving forward, Luis and his team plan to extend their research to additional ecosystems and species, using bird, ground beetle and small mammal data from NEON field sites across the country. “We know that vegetation structure impacts diversity for many groups, not just birds," he says. "Mammals and insects are also influenced by vegetation structure through the habitats and microclimates that exist at a very local level within the forest.”

The study is also exciting because of the way it combines remote sensing and traditional field observation data. NEON’s lidar data allow researchers to study vegetation structure on much larger scales than are possible using field observations alone. Understanding the correlations between species richness and vegetation structure will allow researchers to monitor the drivers of biodiversity on a global scale using remote sensing data. “Lidar gives us very precise and detailed information across very large areas,” explains Luis. “With the NEON data, we can now look at vegetation structure and biodiversity data on a continental scale.”

Coauthor Monica Papas, an Assistant Professor at the EEB UTK, adds, “Although heterogeneity of habitat structure has been central to understanding biodiversity patterns at local scale for many decades, scaling up this relationship is only now becoming possible, with the advancement of airborne LiDAR technology and establishment of NEON observational plots across a diversity of ecoregions. Thanks to local-scale data collected under the same protocol across ecologically diverse NEON domains, we can begin to study macroscale links between vegetation structure and species richness.”

Monica says that the data collection methods used at NEON, along with the scope and scale of the NEON project, are enabling new kinds of science. “The daunting challenge of collecting data at multiple scales, from local to continental, is being addressed by NEON; the role of the user community is to develop new analytical methods that take advantage of the rich and varied datasets collected by NEON.”