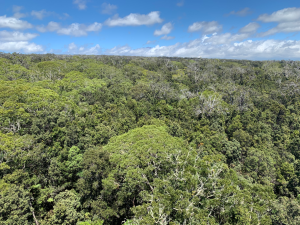 Hawaii's Pu`u Maka`ala Natural Area Reserve (PUUM) field site is a beautiful place to work. The only problem? It's just a tad hard to get to—especially with the NEON Airborne Observation Platform (AOP). That's why the NEON program is excited to have a partnership with the Arizona State University Global Airborne Observatory (ASU-GAO) for remote sensing surveys on the Big Island.

Eyes in the Sky Over Hawaii

The NEON AOP conducts remote sensing flyovers each year at peak greenness over most sites. However, making the 2,500-mile journey over the Pacific to the Hawaiian Islands is logistically complicated for the Twin Otter aircrafts that carry the instrument payloads for AOP. Due to the expense of transporting the AOP to the islands, the original remote sensing plan only included flyovers of PUUM every five years.

The partnership with ASU-GAO will make more frequent airborne observations possible at PUUM. The GAO team completed their first flyover of PUUM in January 2019. These data are now available on the NEON Data Portal. GAO and the NEON program have made plans to continue the collaboration in future years.

GAO offers a comparable suite of instruments to NEON’s AOP, including an identical JPL hyperspectral sensor—one of only a handful in the country. This allows NEON to generate a standard suite of remote sensing data products that are consistent with the rest of the U.S. sites.

Hawaii’s remote location in the Pacific Ocean makes it a unique ecological case study. The islands have a large number of endemic and endangered species that have been jeopardized over the past centuries by a variety of factors such as the introduction of invasive species and land use change. Collecting a standard set of remote sensing data over the next several decades will facilitate better monitoring of this unique and fragile ecosystem.

ASU-GAO, formerly the Carnegie Airborne Observatory (CAO), was developed by Dr. Greg Asner, who still directs the program. Greg developed the original platform in 2006 while working at the Carnegie Institute for Science out of Stanford University. Greg and the airborne observatory team moved to Arizona State University in January 2019. In addition to directing GAO, Greg directs the ASU Center for Global Discovery and Conservation Science.

Greg and his team have continued to upgrade the technology over the years, with the most recent iteration of the platform unveiled in 2015. The instrument payload for GAO is housed in a highly customized Dornier 228-202, a versatile twin-engine transport aircraft capable of overseas journeys and takeoffs and landings from small, rough runways. The aircraft carries three integrated remote sensing technologies:

The technology is backed by an experienced full-time team that handles scheduling, operations, maintenance, science design, and data collection and processing.

The GAO team stays busy. In 2018, they flew more than 200 missions. Roughly half of each year is spent in Hawaii, where they are mapping rainforests and coral reefs. Other missions have taken them all over the world, including Belize, Borneo, Colombia, Costa Rica, the Dominican Republic, Ecuador, Madagascar, Mexico, Peru, South Africa and the U.S. Virgin Islands. Their work has contributed to policy decisions and conservation efforts around the world.

Ramping Up Remote Sensing for PUUM and Beyond

Remote sensing technology has been transformative for ecology. Airborne observation using sophisticated LiDAR and hyperspectral instruments enables researchers to gather data over large geographic scales in incredible detail. Greg says, "These instruments allow us to see the ecosystem with entirely new eyes—3D chemical eyes! We are looking at structural and chemical information not only at the landscape level but down to the individual tree level."

The instrument payloads carried by the GAO and NEON AOPs produce a number of different data products that provide a detailed look at the structure and biogeochemistry of the landscape below.

Greg is enthusiastic about the value of the partnership for both GAO and the NEON program. He has been involved with NEON since the beginning and helped to design the NEON AOP. Since the data are comparable between the NEON AOP and GAO, he sees plenty of opportunity for the programs to work together and extend each other's impact.

"There aren't many people collecting these kind of data," he says. "For a long time, it was just me and NASA's JPL. NEON is programmatically scaling the technology to the continental level, with field sites in every U.S. ecoclimatic domain. I can't fly all of these types of environments on my own, but people can use the NEON data along with ours for comparative studies over time."

Since moving to ASU, Greg has also been focused on getting more students involved in using remote sensing data and technologies. Now that more remote sensing data are becoming available, he sees a critical need to get more people trained in how to use and interpret it. He believes there is role for the NEON program here as well. "We have the students, and NEON has the data," he says. "I see us working together to scale up the science and build the user community. ASU is a great place to be doing this work, because we have a huge and eager student body and a focus on mentorship and training. I want to use this work to reach more students and get them excited and involved."