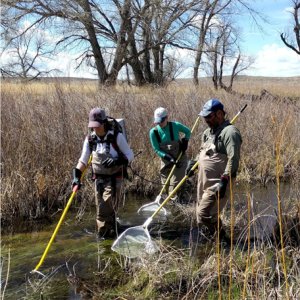 You won’t find any fishing line, hooks or bobbers in NEON’s aquatic technician field gear. Instead, armed with a bucket, nets, and backpack shocker, groups of 3-4 technicians utilize a technique called electrofishing to catch fish and collect data related to fish diversity and populations. By collecting this data, NEON aims to give researchers the tools they need to gain a complete picture of the food chain in aquatic ecosystems across the United States.

NEON’s aquatic sampling design includes 34 aquatic sites (7 lakes, 24 streams and 3 rivers) across the United States. Using standardized sampling protocols at all the sites, NEON will collect and provide data over the next 30 years that can be used to quantify the impacts of environmental change, land use and biological invasions on freshwater environments. As part of aquatic sampling, NEON catches fish via two methods: active sampling using electricity in wadeable streams and lakes to capture fish in wadeable sections of the shoreline, and passive lake sampling using nets to capture larger fish that cruise the shoreline and deeper parts of the lake. This blog post focuses on electrofishing, NEON’s active sampling method. Want to know more about NEON’s passive sampling techniques? Check out our previous blog post The Catch: NEON Goes Fishing.

How do you catch fish with electricity?

For wadeable streams, a one km portion of the stream is broken up into ten 80-120 m reaches or sampling sections. The reaches are identified based on habitat features (i.e. natural breaks such as pools or rapids) and are sampled with an electrofisher using a three-pass depletion study approach. Six of these ten reaches are sampled during each sampling bout. Three of these six reaches are “fixed” reaches and are sampled two times per year. Of the remaining "random" reaches, 3 are sampled twice per year with only a single electrofishing pass.

In lake environments, fish sampling occurs twice a year during the growing season at each lake site, roughly spring and autumn. The lake area is divided up into pie-shaped segments with each “piece” containing a portion of the shoreline as well as deep sections of the lake. Three segments are established as "fixed" sampling stations and are sampled during each bout every year. The remaining sections are considered "random" sampling stations and three of these segments are randomly sampled every year. Random sampling selection rotates so that all habitat types within the lake are covered.

Working with electricity in water comes with safety and training challenges. To ensure the safety of NEON staff as well as to limit negative impacts on target fish species and non-target organisms (e.g. amphibians, reptiles), technicians are specifically trained in fish sampling and safe working practices for water-based fieldwork. All lead aquatic technicians within a domain attend an electrofishing safety training provided by a backpack electrofisher manufacturer in Vancouver, WA. This training is required prior to operating a backpack electrofisher. All technicians also complete the Collaborative Institute Training Initiative’s (CITI) Institutional Animal Care and Use Committee (IACUC) fish and amphibian training. Technicians must pass the final tests for each training (fish and amphibian) with an 80% or better. The CITI IACUC trainings are good for up to three years. Finally, all technicians complete the US Fish and Wildlife Service (USFWS) online Electrofishing Safety training course once per season before the first sampling bout.

Last September, staff in Domain 5 had their first fish sampling bout at Crampton Lake in Wisconsin. After many late nights and a week long delay due to heavy rain, they were able to successfully sample (electrofish) six reaches, set six fyke nets overnight, and set six gill nets (if you’d like to learn more about fyke and gill nets, check out our previous blog post The Catch: NEON Goes Fishing). In total, they caught just over 1,400 fish with at least one fish from every sampling method. The most success came from the fyke nets and electrofishing. On the very last piece of netting on the last panel of their last gill net, staff caught their largest fish of the bout, a 375 mm (approximately 15 in) long bass weighing 672 grams (almost 1.5 pounds). The sampling bout resulted in discovering several species that had not been previously recorded in the Crampton Lake area including Finescale Dace (Chrosomus neogaeus). The data collected from fish sampling should become available on the NEON data portal by early 2018.

Is a better understanding of fish diversity important to you? Would you like to see a NEON fish archive that would include photos, weight, measurements and other metadata? We want to know!