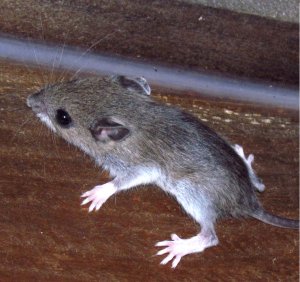 Small mammal pathogen testing protocols for the NEON program are about to get an overhaul. The Observatory is shifting the focus of Rodent-borne Pathogen Status data product from hantaviruses to tickborne diseases such as Lyme disease, anaplasmosis and Rocky Mountain Spotted Fever. The new testing protocols will be piloted at five sites in 2020 in preparation for a planned rollout to all NEON terrestrial field sites in 2021.

The change is being made in response to feedback from the ecology and public health communities. Dr. Sara Paull, a Vector-Borne Disease Ecologist for the NEON program and the lead for the Small Mammal Technical Working Group (TWG), says, “Testing small mammal blood for tickborne pathogens will better support NEON’s mission because the pathogens are more abundant and widespread than hantaviruses. This shift will improve the public health relevance of the data as well as the capacity to detect patterns across space and through time.”

Hantaviruses are a family of pathogens directly spread by rodents. In the Americas, they are primarily associated with hantavirus pulmonary syndrome (HPS), a severe and sometimes fatal respiratory disease. At the time the NEON small mammal pathogen testing was originally developed, researchers believed that tracking the spread of this potentially serious rodent-borne disease would be a priority for the scientific community. However, transmission to humans has remained rare and sporadic; fewer than 30 cases were reported in 2018. Only a small number of rodents tested positive across the NEON field sites, making it difficult to extract statistically useful information across time and space.

Tickborne diseases, on the other hand, are exploding across the U.S., with more than 59,000 reported cases in 2017. While they are not directly transmitted to humans by small mammals, their presence in the small mammal community provides insights into how the diseases are spreading and the climate and ecosystem factors that influence their spread. Tracking the spread of tickborne diseases through the small mammal community is of high interest to both ecologists and public health policy makers.

The new protocols were developed with input from the NEON Small Mammal TWG, from disease ecologists and other researchers interviewed at conferences and over the phone. The proposal received support from leading disease ecologists and public health scientists. NEON Technical Working Groups (TWGs) are made up of NEON data users with specific interest and subject matter expertise in the NEON data products. Input from scientists who are using NEON data in their research ensures that NEON data products fully meet the needs of the science community.

Tracking Tickborne Diseases Across the U.S.

The change will help ecologists and public health researchers to ask different types of questions about ticks, small mammals and pathogen spread using the NEON data. Collecting the same pathogen data from both ticks and small mammals will allow researchers to explore the interrelationships between pathogens, vectors and hosts. For example, scientists may want to compare the percent of infection across different small mammal species and relate this to infections in different tick species. This may shed light on which small mammal species are important for the maintenance of infections in different habitats and locations. This knowledge will improve understanding of these complex systems as well as forecasting of future changes to infection and human health.

The tickborne pathogens proposed to be tested as part of the Rodent-borne Pathogen Status data product do not usually cause illness among small mammals. However, many of them cause serious illnesses in humans. These diseases include Lyme disease (Borrelia burgdorferi and Borrelia mayonii), tickborne relapsing fever (Borrelia miyamotoi), babesiosis (Babesia microti), anaplasmosis (Anaplasma phagocytophilum), Rocky Mountain spotted fever (Rickettsia ricketsii), and tularemia (Francisella tularensis). Some tickborne pathogens also cause disease in livestock.

Over the last few decades, the prevalence and range of many of these diseases has grown dramatically. This is especially true of Lyme disease. More than 30,000 cases of Lyme disease are reported to the CDC each year, and it is likely that many more cases go undiagnosed and unreported. Untreated, Lyme disease can lead to long-lasting neurological, cardiological and joint problems. The number of reported cases of Lyme has tripled since the late 1990s, and the geographic range of ticks carrying the pathogen has greatly expanded. Similar increases in range have been observed for ticks carrying other pathogens. As ticks and the pathogens they carry move into new regions, they represent a growing public health threat to people who may not be aware of their presence.

Climate change and land use patterns may be escalating these trends. Changes to precipitation patterns and winter temperatures influence tick survival and affect tick ranges. Land use and management decisions also impact tick populations and put more people in contact with ticks. Many of these relationships are complex, and research to disentangle the multiple interacting drivers of tickborne disease emergence will benefit greatly from additional open-access data.

Changes in climate and habitat also impact small mammal range and community composition—and small mammals carry ticks with them. As small mammal populations grow and expand into new areas, they also act as hosts and carriers for ticks. The new NEON small mammal pathogen testing protocol will allow researchers to explore how small mammals and the ticks they carry are responding to changes in climate and habitat. Ultimately, this will allow researchers to build better models of the factors that influence the spread of tickborne diseases. Sara says, “Researchers can explore any number of questions now about how small mammals influence the number of ticks present in an area and how the small mammal and tick populations impact the spread of disease. These are important questions, not just from a science perspective but from a public health perspective.”

Still Interested in Hanta? The Archive Has You Covered.

Researchers who would like to have a voice in future changes to small mammal collection and testing protocols can request to join the Small Mammal TWG. Learn more about our technical working groups or nominate a TWG member.