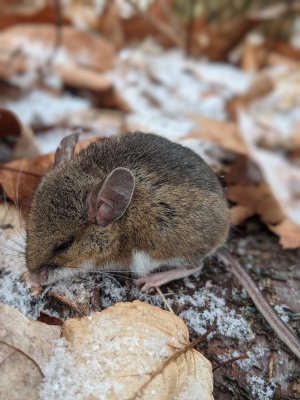 The deer mouse (Peromyscus maniculatus) can be found in nearly every ecosystem across North America, from the eastern woodlands to western mountains and deserts and everywhere in between. That makes them an excellent species to monitor how environmental cues impact the timing and intensity of reproduction in small mammals.

But how do you collect phenology data at a large scale for such an elusive species? Drs. Bryan McLean and Robert Guralnick combined mammal trapping data from the NEON program with a century of museum data to find insights into the environmental drivers of reproduction for small mammals.

Phenology is the study of the timing of recurring biological events, such as leafing, flowering, and leaf drop for plants or migration, hibernation, and reproduction for animals. For small mammals, the timing of reproduction has long been thought to be triggered by environmental cues such as photoperiod (length of daylight), temperature, or food availability. However, asking if—and to what extent—wild mammals use these cues is difficult. Understanding these drivers of reproduction will help scientists predict how small mammal populations respond to climate change and other shifts in the environment. "Most of what we know about mouse reproductive phenology comes from decades of laboratory study," explains Dr. McLean. "We wanted to link what we know about mouse physiology and phenology from the lab to wild populations and see how the theories held up."

To do this, McLean and Guralnick needed large-scale phenology data on wild mouse populations representing many different climate zones and habitats. But getting that kind of data at that scale from wild mouse populations isn't easy. While citizen scientists have captured millions of continental-scale phenology observations through programs and apps such as eBird, iNaturalist, and Nature's Notebook, these efforts tend to focus on easily observed and charismatic species such as flowering plants, butterflies, and birds. Mice are much less popular and much more likely to remain hidden from casual observers. Noting signs of mouse reproduction—such as pregnancy or lactation—also requires handling animals and some specific training. Because of these challenges, phenology data for small mammals has not been readily available for answering questions about response to environmental change.

McLean says, "We wanted to be able to do large-scale phenology studies of the type made possible through large initiatives like iNaturalist, but with small mammals. But rodent data are hard to come by. For us, the first question is, where do we get the data?"

McLean and Guralnick tested a new workflow for gathering large-scale phenology observations for small mammals using digitized records from museums along with small mammal data from the NEON program. They chose the deer mouse for the study because of its abundance across the continent; this species is thought to be the most common small mammal in North America and is an important prey base for larger mammals and raptors. These qualities make it a good sentinel species to study to understand ecosystem changes.

The study tested three climate variables as potential drivers of reproduction in deer mice: photoperiod, temperature, and precipitation. Temperature and precipitation were used as proxies for food availability, and photoperiod is a known breeding cue in many animals and plants.

Both McLean and Guralnick have museum backgrounds. McLean is now an associate professor in the Biology department at the University of North Carolina – Greensboro, and Guralnick is on the faculty at the Florida Museum of Natural History where he serves as Curator of Biodiversity Informatics. Naturally, they first turned to museum databases to look for deer mouse reproductive phenology data. "Museums are a great source of reproductive data," McLean says, "especially if trait data has been digitized. However, not all museums have yet digitized their traits."

Previously, Guralnick and collaborators had developed a set of algorithmic tools (called Traiter) to extract and standardize raw data from museum records in the VertNet database – in particular, digitized traits including body size, weight, and reproductive status. The algorithm was developed in collaboration with informaticians and computer scientists and was tweaked to find all kinds of reproductive data from mouse specimens, including pregnancy, post-pregnancy, and lactation status for females. In the study, these traits were distilled down to two variables: breeding (pregnant, post-pregnant, or lactating) or non-breeding. The collection date and location were also used to assemble climate variables. The museum data spanned more than 100 years and included more than 5050 records from museums across the country.

To augment this dataset and fill more recent data gaps, the researchers looked at small mammal data from the NEON program. The NEON program collects observational data on live small mammal specimens, most of which are then released back into the wild. These observations include body length and mass and visible signs of breeding, such as obvious pregnancy or lactation status. NEON data were downloaded, assembled, and paired with the museum data, doubling the available sample size.

McLean says, "The NEON data filled an important data hole for us. Because of restrictions on collection in more recent years and fewer researchers archiving these materials, the museum data tend to be biased towards earlier time periods. NEON gives us recent and current data that we can compare to the historical record. And NEON data is collected consistently across time and across the continent, providing data at a scope and scale that was not previously possible."

The NEON program also collects climate data concurrently with the small mammal observations, which allows researchers to use actual data on precipitation and temperature instead of approximating based on climate models.

Understanding the Links Between Climate and Deer Mouse Reproduction

The study, "Digital biodiversity data sets reveal breeding phenology and its drivers in a widespread North American mammal," was published in Ecology in November 2020. McLean says it serves as a proof-of-concept for their approach of combining phenology data sets from disparate sources. They hope it will serve as a model for similar studies of other small mammal species.

For the deer mouse, they found that use of reproductive cues varied by region. In dry deserts, reproduction was tied more closely to precipitation, while temperature was a more important driver for mice in northern coniferous forests. McLean says, "We found that they respond in ways that are specific to their climate context. Now, we can use this same method to ask similar questions for other species of small mammals. We'd like to see if these same patterns hold up or if there is variation among different species. Understanding how these patterns play out among different species will give us insight into how entire small mammal communities may shift in composition under different climate conditions."

These questions affect more than just small mammals. Small mammals are a primary food source for many other species that garner more public attention, including raptors and predators such as foxes, weasels, snakes, lizards, and small wildcats. They also are important in seed dispersal and serve as vectors for a number of human and livestock diseases.

McLean and Guralnick plan to expand these analyses to look at other species and climate variables, and they also hope that other researchers will expand on their methods. Data from the NEON program are likely to continue to play an important role in these studies. "It's exciting to think about the next steps," says McLean. "With the NEON program, we can obtain information on a lot of other co-located ecological variables beyond just climate, such as food resources, arthropod abundance, plant phenology data and community composition, and other data that isn't commonly available in museum records. This gives us much deeper ecological context to ask different kinds of questions."