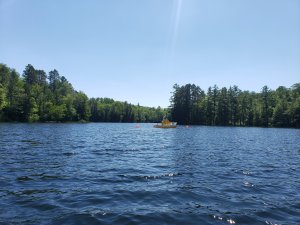 The Great Lakes Domain (D05) encompasses 484,000 km2 (187,000 square miles) of Minnesota, Wisconsin, Michigan, northern Ohio, and portions of Illinois and Indiana. The northern boundary follows the U.S.-Canadian border. The Domain roughly follows the outline of the watershed for the Great Lakes Basin.

This region of the country was shaped by ancient glaciers. The five Great Lakes were formed 14,000 years ago when the last glaciers retreated, leaving behind giant basins filled with meltwater. The surrounding region contains diverse topography and habitats, with many smaller lakes, streams, and wetlands. Historically, most of the land was forested, with smaller pockets of northern prairie and savannah.

Over the last 250 years, humans have transformed much of the landscape through logging, agriculture, industry, and human habitation. Many wetland areas were drained for agriculture and construction. The region is now home to more than 34 million people, including the large population centers of Chicago, Detroit, Cleveland, Milwaukee, and Grand Rapids.

In northern Wisconsin and the Upper Peninsula of Michigan where the NEON field sites are located, the population is sparse, and the land is more pristine. Winters are long and snowy, with temperatures frequently dropping below -18°C (0°F) and "lake effect" snow sometimes exceeding 100 inches per year. The short growing season and cool climate make the area inhospitable for agriculture. During the 1800s, the old-growth pine and hardwood forests that covered most of the land were extensively logged.

The University of Notre Dame Environmental Research Center (UNDERC), straddling the state line between Wisconsin and the Upper Peninsula of Michigan, also hosts the Crampton Lake aquatic field site. The site is located in a mature second-growth forest with little human disturbance outside of research activities. Forests are interspersed with small lakes, bogs and wetlands; about 16% of the site is covered in open water. Crampton Lake, a 26-hectare seepage lake, is typical of the aquatic environments in the region.

The 7500-acre center has a rich history of environmental research and supports numerous programs for students and researchers at the University of Notre Dame. The center borders the Ottawa National Forest.

The TREE and STEI terrestrial sites are located just a mile apart in rural northern Wisconsin, about 70 miles south of the UNDERC and Crampton Lake sites. This area is managed for logging and recreation, providing a contrast to the more pristine environment at UNDE.

The neighboring sites represent different approaches to forest management. Treehaven was heavily logged and burned from the mid-1800s through the 1930s and subsequently grazed and mowed through the 1950s. Since then, it has undergone an extensive reforestation program. It is now managed by the University of Wisconsin – Stevens Point for research and some sustainable logging. The tower at Treehaven sits in an area continuously managed for sugar maple production, while distributed plots represent different management practices and dominant tree species. Steigerwaldt is managed for active timber production and recreation. The tower site is select cut for aspens, which are used for pulp. The distributed sites are located in the Park Falls District of the Chequamegon-Nicolet National Forest, which is managed for timber.

Located about 35 miles southwest of UNDERC, Little Rock Lake is managed by the Wisconsin Department of Natural Resources as a recreational fishing area. Like Crampton Lake, it is a small seepage lake. It lies within the Long Term Ecological Research (LTER) North Temperate Lakes study area.

LIRO is notable for its long history of research into northern lake ecosystems and limnology. In the 1980s, the University of Wisconsin and Wisconsin Department of Natural Resources embarked on a 30-year study of the impact of air and water pollution on lake ecosystems. As part of the study, a plastic barrier was installed, splitting the lake into two separate basins. Acid was sprayed into one basin over a six-year period to simulate the effects of acid rain, and the other was left undisturbed. The barrier was lifted in 2013. The findings provided insights into the impacts of acidification on aquatic plant, animal and microbial communities and influenced the 1990 Clean Air Act Amendments. The lake has since largely recovered from the experimental conditions and now once again functions as a single aquatic ecosystem.

The contrasting land management practices at the sites in D05 provide a unique opportunity to study the impact of human development decisions on both terrestrial and aquatic ecosystems. The towers located at the three terrestrial sites generate carbon flux data, which enable researchers to see how different forest management practices impact the carbon sequestration ability of northern forests, among other key research questions.

Data collected at D05 sites can also help researchers monitor the impact of climate change on northern forest and aquatic ecosystems. The climate in the Great Lakes region is shifting, with more temperature extremes and extreme weather events. The Great Lakes states are expected to experience longer, hotter summers, more frequent flooding events, and an increase in "lake effect" snowfall. These changes will have a profound impact not only on terrestrial ecosystems and agriculture, but also on the Great Lakes themselves and other aquatic ecosystems in the Great Lakes Basin. Data from Little Rock and Crampton Lakes could help to illuminate how warming waters and shifting freeze/thaw cycles are impacting lake metabolism and carbon cycling between aquatic and terrestrial ecosystems.

A changing climate also makes the region more hospitable to invasive plant, insect, aquatic, and microbial species, which are changing the community composition in many northern ecosystems. Invasive insects such as the Emerald Ash borer have heavily damaged some native tree species, while warming temperatures enable native species of bark beetles to expand in population size, range, and destructive capabilities. Insect-borne pathogens such as Lyme disease are also exploding in the Great Lakes states. NEON plant, insect, small mammal, and pathogen data will help researchers monitor these changes.

In the coming decades, the NEON program will provide data to help answer many urgent questions about the Great Lakes ecosystems and how they are changing. The answers could help policymakers and land managers make better decisions to protect the health of these unique ecological treasures.