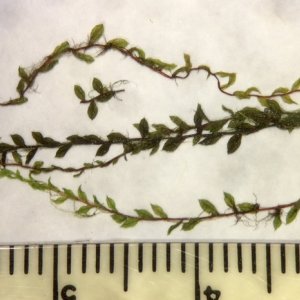 Dr. Paul Siri Wilson is shining a light on some understudied members of California's ecosystems: bryophytes. He and his students are creating a new ebook and sponsoring open microscope days to bring awareness to the mosses, liverworts and other non-vascular plants that most people take for granted in the landscape. He has also lent his expertise to NEON field scientists to help with correct identification of bryophyte samples from the NEON field sites.

So, What Exactly is a Bryophyte?

Bryophytes are non-vascular plants that grow on land and in the water and include mosses, liverworts and hornworts. These plants are typically small and live close to the substrate (e.g., soil or rock) they are growing on. Unlike most members of the botanical kingdom, they do not have the support tissues and vascular systems common to flowering plants, ferns, clubmosses and conifers. They are also characterized by their reproductive lifecycle, which is dominated by the phase that makes eggs or sperm. They reproduce through spores and do not produce seeds or flowers.

Bryophytes vary widely in appearance. Mosses are small flowerless plants that typically form dense mats or clumps and tend to favor damp or shady locations. Liverworts come in many different forms, with some species looking very similar to mosses and others having a flattened, ribbon-like appearance.

Bryophytes are important in an ecosystem because they are able to grow in places where vascular plants cannot. Because they do not depend on roots for uptake of nutrients, they can survive on bare rocks or barren soils. They are often the first plants to colonize open ground and perform a vital role in regulating ecosystems. Bryophytes are important for soil formation, turning barren terrain into soil that other plant species can grow in. Their presence in the soil helps to maintain moisture levels. They also recycle nutrients, returning them to soil when they die and decompose. The presence of certain species of bryophytes can be used as an indicator of overall ecosystem productivity and nutrient status. Paul explains, "Bryophytes hold the earth together. Without them, soil just starts falling apart, both physically and chemically."

However, there are many knowledge gaps in our understanding of bryophytes—including the precise number of species, how species are related, and sometimes even basic identification. Compared to other plants, bryophytes are understudied. Paul says, "They are not a big charismatic species like the Giant Sequoia. There are not a lot of botanists studying them extensively anymore, and we are losing specialists from the previous generation. A lot of the knowledge base is oral, and it is disappearing. We need to get the next generation involved so this knowledge is not lost."

Paul has devoted much of the last ten years of his career to doing exactly that. A biology professor and researcher in the California State University–Northridge Department of Biology, Paul started his academic career focused on the evolution of flowering plants. But as he started looking at the available research and resources for bryophytes, he became aware that this was a gap that needed to be filled. "This is an area where my students and I can really make a difference and do original work that isn't being done elsewhere," he says.

In addition to academic research, Paul spends considerable time on outreach activities for young researchers and the general public. The California Native Plant Society (CNPS) already had active local chapters offering nature walks for amateur naturalists, students and others interested in observing plants in their local ecosystems. Paul helped to found a new statewide chapter of CNPS focused on bryophytes. He and his students lead nature walks for people interested in observing, identifying and collecting bryophyte samples.

As an outgrowth of these walks, he started organizing open microscope days at community colleges and universities. The open microscope time was scheduled in conjunction with the local nature walks so that people could bring in their samples and examine them in more detail through the microscopes. Because bryophytes tend to be small and many species are highly similar to each other visually, microscope observation is sometimes needed to make a correct species identification.

Paul and his students have also created an eBook focused on identification of bryophytes in California from the coast to the western edge of the Sierra Nevada Mountains. The book is organized by ecology, so people can look at different ecological niches and see what kinds of mosses, liverworts and hornworts are likely to be found there. High-quality photos and detailed descriptions of each species' characteristics assist both professionals and amateurs with correct identification. Readers can also click on each species to find additional information about its ecology and biology. The interactive book is geared towards the students and amateur naturalists that join the CNPS walks and open microscope days, but will also be a valuable resource for professional researchers seeking identification information for bryophytes in the ecosystems they are studying. "There really isn't another resource like this available," Paul says. The book currently includes 150 species out of the approximately 800 bryophyte species in California. Paul and his students plan to continue to add to the book as photos of additional species become available. The ebook is undergoing extensive revisions now, but will be available to researchers and the public later this year on the CNPS Bryophyte chapter website.

NEON collects data on the presence, composition and abundance of aquatic plants, bryophytes, lichen, and macroalgae at aquatic field sites throughout the year. These organisms can act as indicators of invasive species and changes in nutrient loads, toxicity, and land-cover in watersheds. NEON aquatic plant data are compatible with data from existing environmental monitoring programs, like the EPA National Lakes Assessment and USGS Long-Term Resource Monitoring Program, and will enable a more holistic understanding of aquatic plant communities across the United States. NEON also conducts biogeochemical analyses and archives a subset of samples for scientist to use. Bryophyte data are also collected at terrestrial sites in Alaska as part of the non-herbaceous vegetation structure protocol.

In 2016, NEON ecologist, Jonathan Celmer, collected a rare aquatic form of the common terrestrial moss species, Ptychostomum pseudotriquetrum (synonym Bryum pseudotriquetrum). This form of the species is known for living in deep lakes in Antarctica - as far down as 100 meters. Celmer’s collections (identified by David Kofranek, NEON’s Aquatic Bryophyte and Lichen Taxonomist) from the Arctic’s Toolik Lake are apparently the first records of this rare polar form for North America.

Paul says he is happy to continue working with NEON researchers when his knowledge is of use. He believes that the NEON project's work could help to preserve important knowledge about bryophytes, fill in knowledge gaps about species abundance and range, and document changes in bryophyte communities at NEON field sites. "Bryophytes are hugely impacted by climate change and environmental disturbances like fires," he says. "The recent drought in California caused dramatic changes in the bryophyte communities that we are observing. The amount of moisture in the soil, the amount of dead wood on the forest floor, the amount of sunlight they get—all of these factors are important in determining which bryophyte species can grow in an area. As our climate changes, bryophytes give us a window into the health of an ecosystem and how it is changing in response."