The Hierarchical Data Format version 5 (HDF5), is an open source file format that supports large, complex, heterogeneous data. HDF5 uses a "file directory" like structure that allows you to organize data within the file in many different structured ways, as you might do with files on your computer. The HDF5 format also allows for embedding of metadata making it self-describing. 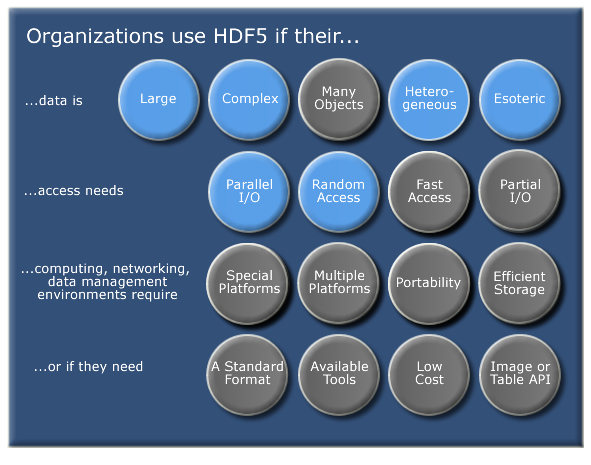 Why Use HDF5. Source: The HDF5 Group

Hierarchical Structure - A file directory within a file

The HDF5 format can be thought of as a file system contained and described within one single file. Think about the files and folders stored on your computer. You might have a data directory with some temperature data for multiple field sites. These temperature data are collected every minute and summarized on an hourly, daily and weekly basis. Within one HDF5 file, you can store a similar set of data organized in the same way that you might organize files and folders on your computer. However in a HDF5 file, what we call "directories" or "folders" on our computers, are called groups and what we call files on our computer are called datasets. 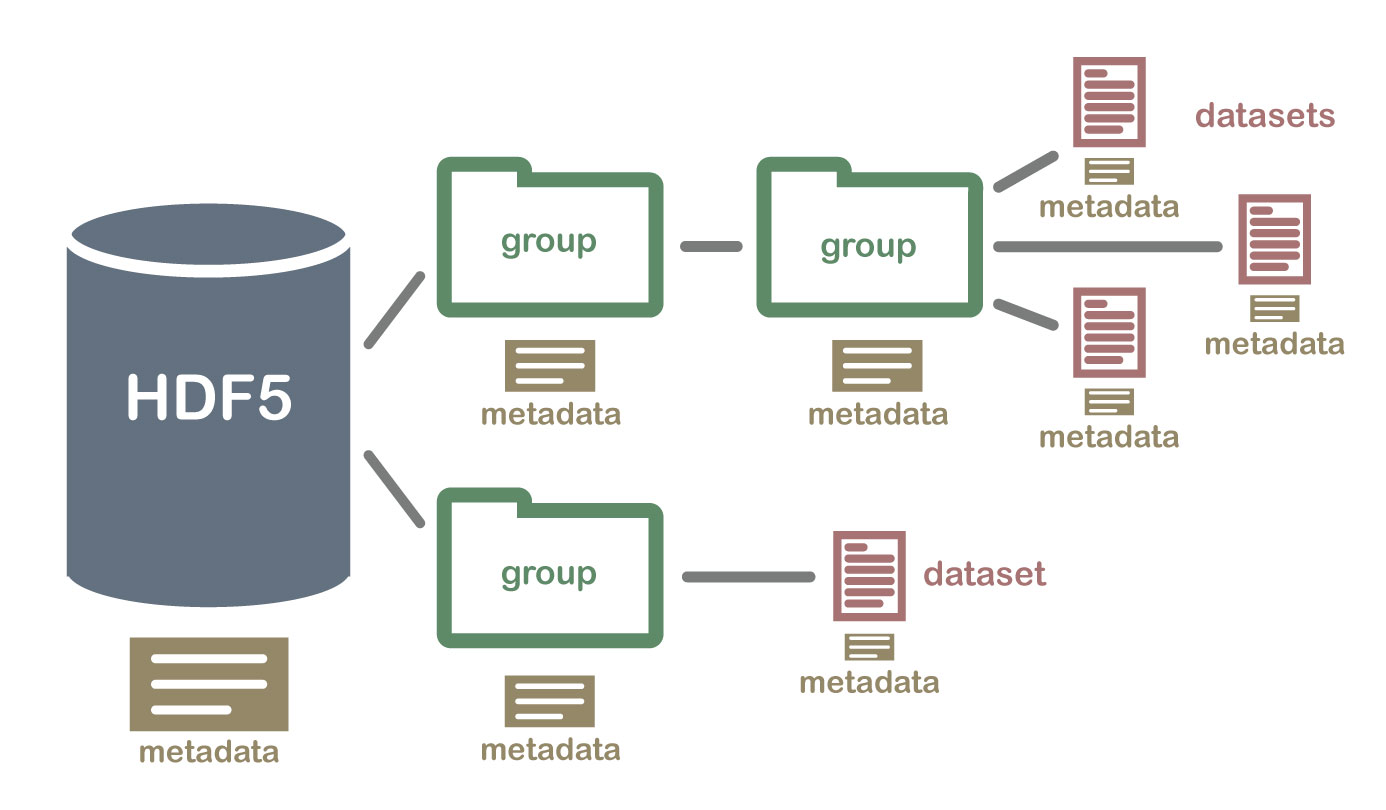 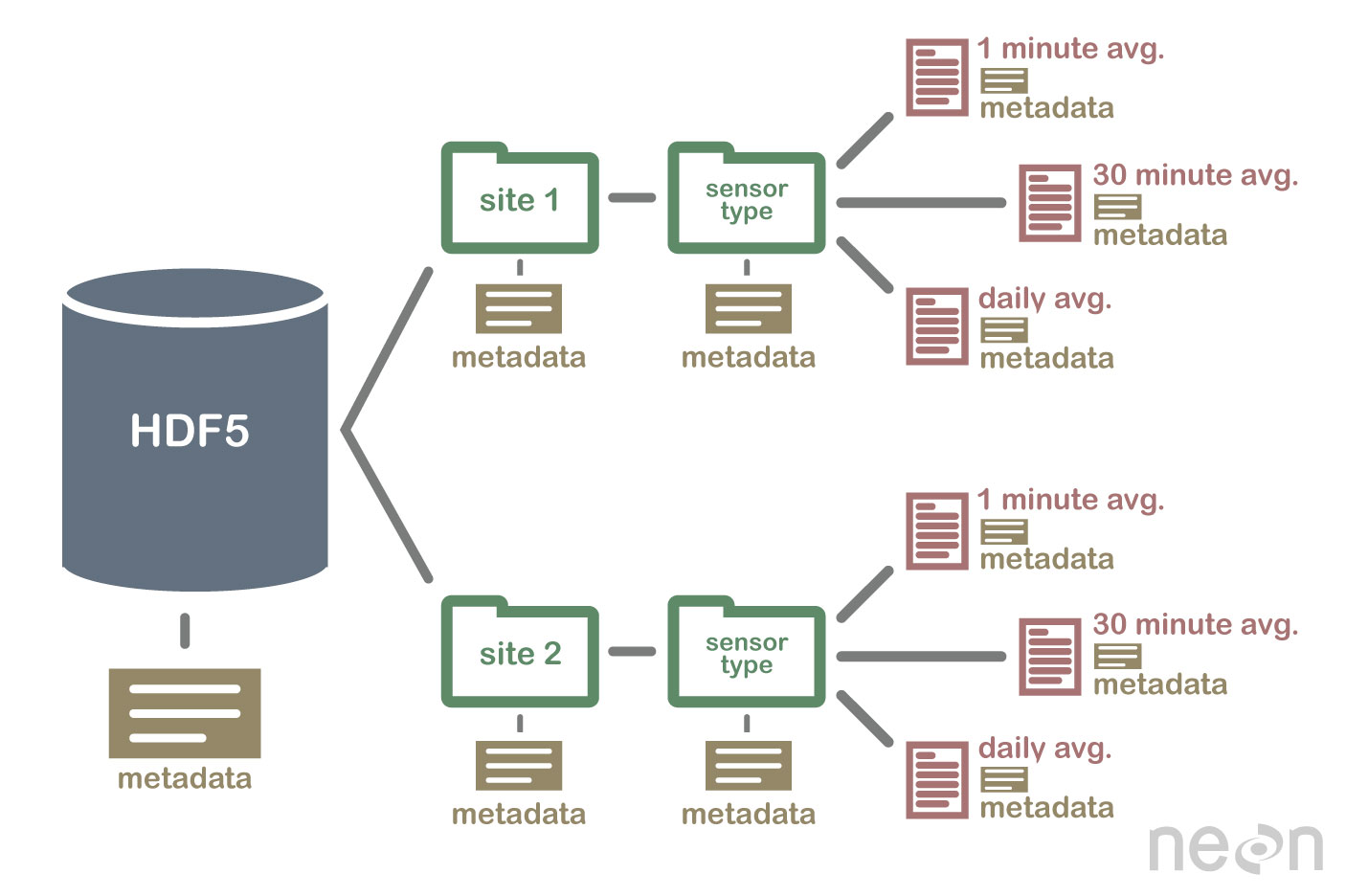 HDF5 is a Self Describing Format

HDF5 format is self describing. This means that each file, group and dataset can have associated metadata that describes exactly what the data are. Following the example above, we can embed information about each site to the file, such as:

Similarly, we might add information about how the data in the dataset were collected, such as descriptions of the sensor used to collect the temperature data. We can also attach information, to each dataset within the site group, about how the averaging was performed and over what time period data are available.

One key benefit of having metadata that are attached to each file, group and dataset, is that this facilitates automation without the need for a separate (and additional) metadata document. Using a programming language, like R or Python, we can grab information from the metadata that are already associated with the dataset, and which we might need to process the dataset. 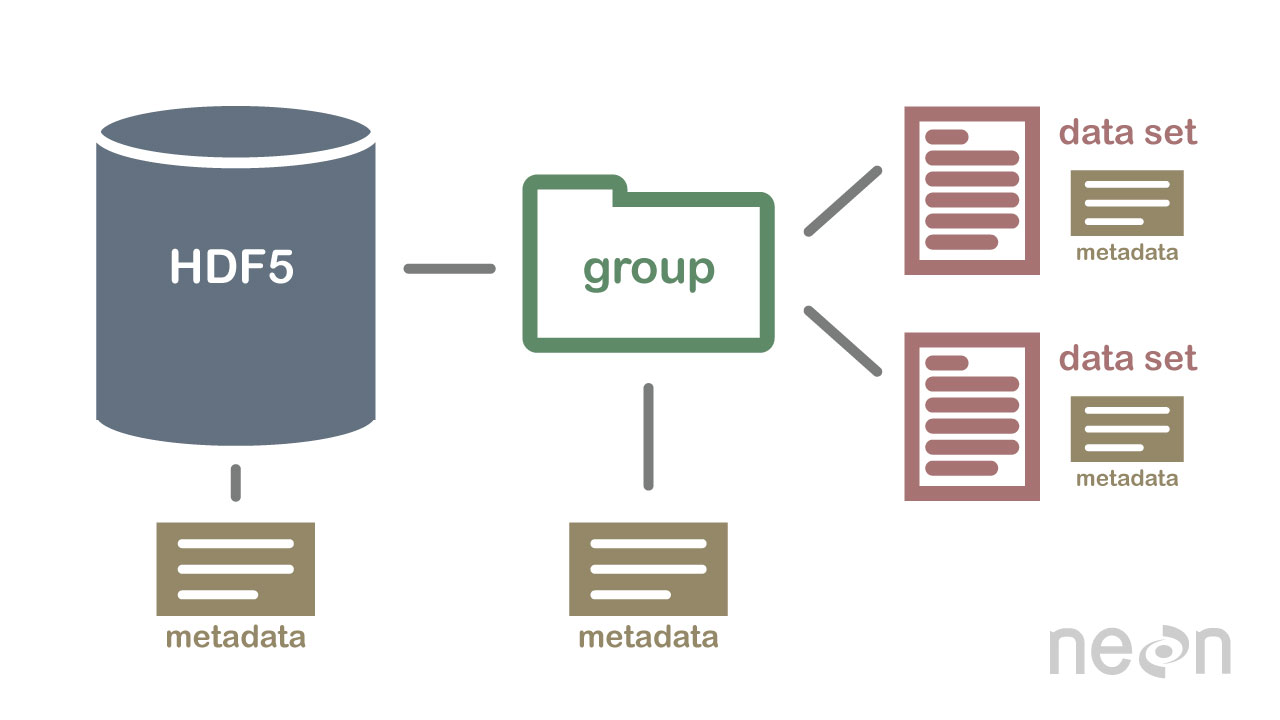 HDF5 files are self describing - this means that all elements (the file itself, groups and datasets) can have associated metadata that describes the information contained within the element.

The HDF5 format is a compressed format. The size of all data contained within HDF5 is optimized which makes the overall file size smaller. Even when compressed, however, HDF5 files often contain big data and can thus still be quite large. A powerful attribute of HDF5 is data slicing, by which a particular subsets of a dataset can be extracted for processing. This means that the entire dataset doesn't have to be read into memory (RAM); very helpful in allowing us to more efficiently work with very large (gigabytes or more) datasets!

HDF5 files can store many different types of data within in the same file. For example, one group may contain a set of datasets to contain integer (numeric) and text (string) data. Or, one dataset can contain heterogeneous data types (e.g., both text and numeric data in one dataset). This means that HDF5 can store any of the following (and more) in one file:

The HDF5 format is open and free to use. The supporting libraries (and a free viewer), can be downloaded from the HDF Group website. As such, HDF5 is widely supported in a host of programs, including open source programming languages like R and Python, and commercial programming tools like Matlab and IDL. Spatial data that are stored in HDF5 format can be used in GIS and imaging programs including QGIS, ArcGIS, and ENVI.