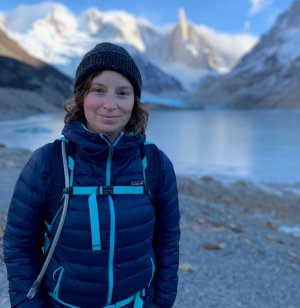 Though the number of women in STEM fields has risen steadily over the last eight years, there still remains a significant gender gap that presents young women with challenges not endured by their male counterparts. And for young women who are not personally introduced to a female in the field, pursuing this type of professional work or a career in academia can certainly be daunting and expose women to imposter syndrome – the feeling that they do not belong. Ecologists profiled in the Women in Ecology series have emphasized the value of mentorship and supporting female students and early-career scientists to overcome these challenges.

We discussed this with Jennifer Cotton, an assistant professor in the Department of Geological Sciences at California State University Northridge, who specializes in paleoclimatic and paleoenvironmental reconstructions of terrestrial ecosystems. Jennifer shared with us her experiences with mentorship, both as a mentee and as a source of support and inspiration for her students.

Q. What inspired you to become involved in your current research/field?

I have always been kind of a science nerd but, for me, it took a while to figure out which specific field I wanted to get into. For a while, I was interested in the human impact on the environment. But it wasn’t until my junior year of my undergraduate program, when I was a research intern, that I was introduced to something called stable isotope geochemistry, and that pushed me into that field and then into the research that I've been working on ever since.

Q. Please tell us a little about your career path.

I grew up in central Massachusetts and moved to Boston for my undergraduate degree at Brandeis University. I majored in chemistry because I had really liked it in high school, but, three years into my degree, I realized I was unsatisfied with traditional chemistry.

In the spring of my junior year, I took an environmental chemistry course where a big portion of the class was devoted to atmospheric and environmental pollution as well as climate change. This was the most interesting class I had taken in college thus far; it showed me there were real-world applications of chemistry to solve issues affecting millions of people. So, after I took that class, I started looking into how to get more involved in environmental chemistry, but at Brandeis there were no environmental science degree options, or even additional classes I could take. For that reason, I applied for a summer research program and, fortunately, was accepted at the Carnegie Institution of Washington. I ended up being able to work with a couple of renowned biogeochemists.

After earning my B.S. degree in Chemistry in 2007, I began my slow westward journey, stopping for graduate school at the University of Michigan and earning my Ph.D. in Earth and Environmental Sciences in 2013. Continuing westward, I then worked as a postdoctoral fellow at both the University of Utah and Oregon State University as part of the Inter-University Training for Continental Scale Ecology (ITCE) program through 2015. I finally arrived in the “promised land” of Los Angeles in January of 2016 where I have been a professor in the Geological Sciences Department at Cal State Northridge for almost five years.

Q. Who were your most important influences/mentors in ecological science?

Before I went to college, I spent a lot of time around some very smart, strong, and confident women, including my mother, so it never crossed my mind growing up that I wouldn't be a scientist; it was kind of engrained in my brain. I would say I have been lucky to have great mentors as an undergraduate and grad student. Two women I worked with during my summer research program were very well-known isotope ecologists named Marilyn Fogel and Penny Morrill. I was introduced to this whole new field that I'd never been exposed to before; it was basically using chemistry as an ecological and environmental tracer. That program really changed my life. Marilyn and Penny encouraged me to apply to graduate school in a completely different field than the one I was studying in college; I would have never been accepted into graduate school if I hadn't had recommendations from the two of them. Another important mentor was my Ph.D. advisor Nathan Sheldon. He was particularly great for me because I was coming into a geology program with a chemistry degree. He spent a lot of extra time with me to get me up to speed on the geology background that I didn't have.

Since then, I've been collaborating with a lot of other younger, early-career scientists, especially a lot of women such as Tara Smiley, Rebecca Terry, and Nadja Insel, that have made working in research teams really enjoyable.

Q. What work are you most proud of at this point in your career?

Well, this does not necessarily have to do with research, but it does have to do with mentoring students. I’ve been teaching at Cal State Northridge for about five years now, and it has a huge number of first-generation students and non-traditional students returning to college to finish degrees that they’ve started in the past, which is different from the institution where I went for my undergraduate degree. I think it's cool because we’ve got really smart students who sometimes don't know they’re smart. You can find them and inspire them and easily change the course of their lives by mentoring them on their research and then encouraging them to apply to graduate school. So I found that that's been the most rewarding part of my career. I get to work one-on-one with the students to get them interested in research, help them give presentations at national conferences and other events, and see my students go on to be successful.

Q. What do you hope to do in your field in the future?

I think interdisciplinary work is the future. I really like what I've been doing – bringing ecologists, geologists and chemists together. We still have to gain a better understanding of the entire earth system; there are so many different aspects of the system and no one person is going to be able to understand it all. The best way to achieve this is to be able to bring in experts from all sorts of fields onto a single team.

The interdisciplinary work is both the most challenging and most satisfying. The most challenging part is that because I’m doing interdisciplinary research, I can sometimes feel a bit left out from certain departments. It's a bit of a challenge to be straddling two different disciplines. But, it's also satisfying because it means that I have gained an understanding of multiple fields which helps me to be more creative with my research. At the end of the day, it is a luxury to be able to work across departments.

Q. Can you tell us more about your work studying the environment through geochemistry?

I've been looking at modern timescales, trying to take that concept of “you are what you eat” and apply that to small mammals. Using the modern specimens that NEON is collecting from all their sites across the country, I am seeking to validate the idea that we can use small mammals to study environmental and climate change. These small mammals can serve as recorders of how humans have changed the landscape over the past 100 – 150 years; they are signals of environmental change.