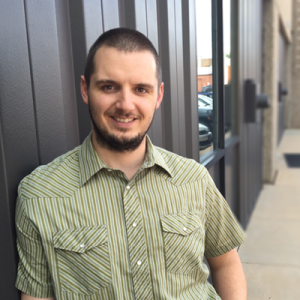 NEON scientist Dr. Stefan Metzger received the 2013 Young Scientist Award from the German Meteorological Society at the DACH conference of German, Austrian and Swiss meteorologists in Innsbruck, Austria, on September 3. The award is presented every three years for outstanding developments and achievements across all fields of meteorology.

Metzger received the award for his recent article in Biogeosciences about a method to quantitatively extract key relationships between observations in comprehensive environmental datasets. The method is a step toward addressing a major challenge for both NEON and the greater ecological and environmental modeling communities: closing the gaps among observational scales. Applied to NEON data, the method could someday improve the accuracy of complex assessments of local to regional water budgets or help differentiate between natural and man-made sources of greenhouse gases.

Metzger’s article describes how he and his collaborators combined advanced computational tools to extract key relationships between environmental observations collected from aircraft and related observations from satellite remote sensing instruments. The resulting environmental response function provides a quantitative framework to fill gaps in space or time – to infer conditions in areas or at times where only partial information is available.

Computational models of ecological processes need more and more detailed information about environmental conditions over space and time to increase their accuracy and predictive power. However, it is practically impossible to take enough measurements in enough places to describe every square kilometer in the country in the same amount of detail that NEON captures at each of its sites.

NEON almost continuously measures both drivers of and responses to environmental change with automated sensors and hand sampling on the ground at its dozens of sites across the U.S. NEON’s airborne remote sensing platform gathers a different but related set of measurements once a year across larger swaths of the U.S. NEON’s ability to achieve ecological forecasting at continental scale depends on techniques that bridge the gaps in space and time between such ground-based, airborne and satellite measurements.

Previous attempts to scale similar sets of observations across space relied on comparatively coarse datasets, such as land cover classifications made once every year or once every few years. Metzger’s technique utilizes topical remote sensing data and atmospheric observations of much finer spatial resolution, as well as machine learning techniques, to produce results that are significantly more accurate and precise. Metzger and collaborators at the University of Wisconsin are currently investigating the applicability of his new procedure to data more similar to NEON’s terrestrial instrument measurements: ground-based measurements of greenhouse gas exchange between land and atmosphere.

Happy Earth Day! Let’s Science Together
April 21, 2020
What Happens to Ecology When Humans Can’t Get to the Field?
August 5, 2020
Getting to Know the NEON Domains: Pacific Tropical
April 29, 2020