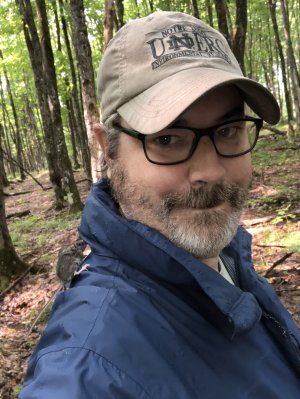 "Mice," says Michael Cramer, "are the French fries of the forest. Everyone eats them."

He would know. Michael, a small mammal researcher and the Assistant Director of the University of Notre Dame Environmental Research Center (UNDERC), has spent much of his career studying the ecology and behavior of mice and other small mammals. His latest research leverages NEON data to document how mouse populations are changing over time—and how these small fries may be changing the ecosystems around them.

The woodland mouse, as its name suggests, tends to thrive in undisturbed forests. Its white-footed cousin is more adaptable, happily living in a wide range of habitats and in areas disturbed by humans. Over the last few decades, researchers in the Great Lakes region have documented a decline in woodland deer mouse populations and a corresponding increase in white-footed deer mouse populations in many habitats. In some areas, white-footed mice are moving into habitats once dominated by woodland mice; there is concern that the woodland species may be getting crowded out as white-footed mice move in.

Both species serve as an important food source for a variety of predators, including hawks, owls, weasels, foxes, coyotes and snakes. For this reason, many people think of the two species as largely interchangeable in the ecosystem. However, Michael's research suggests that their foraging habits and breeding patterns are different enough to give them slightly different ecological niches. For example, woodland mice eat specific species of maples seeds at different times of the year while white-footed mice are less particular in their eating habits. Over time, eating patterns of large populations of mice could impact the makeup of the forest habitat in unexpected ways.

A Mouse Model of Ecological Change

For Michael, the mice are a model species to address larger questions of how populations and ecosystems are changing over time. "They sit right in the middle of the food web, and are an excellent indicator of overall forest health," he says. He is interested in learning how the composition of mouse populations impacts other aspects of the ecosystem. "If you swap out P. maniculatus for P. leucopus, will it change the types of trees that are successful in the forest? Do they have different behaviors that make them more or less vulnerable to different predators? There is a lot we don't know yet."

One important question is how the different species may respond to climate change. The woodland deer mouse is better adapted to cold weather and shows better survival rates in harsh winter conditions. On the other hand, the white-footed deer mouse has the ability to produce more litters in a year. When temperatures are milder, this allows P. leucopus to outbreed the competition.

UNDERC, located on the outskirts of Ottawa National Forest on the border of Wisconsin and Michigan's Upper Peninsula, has experienced shifts in temperature and precipitation patterns in recent decades. Winters are getting warmer and experiencing less snowfall overall. But the upper Midwest experiences occasional "polar vortex" conditions with extended periods of extreme cold. These unpredictable temperature fluctuations may be particularly hard on white-footed mice, especially when there is no snowfall to insulate the ground. If the white-footed mouse crowds out woodland mice in warmer years, forests could see a collapse in overall mouse abundance in polar vortex years, with consequences all through the food web.

So far, Michael has not seen this pattern at UNDERC; populations of both woodland and white-footed deer mice have remained stable. However, his colleagues in other parts of Michigan and the Midwest have recorded fewer woodland and more white-footed mice in many habitats. Michael theorizes that the undisturbed woodlands in the national forests that surround UNDERC may provide a protected habitat where woodland deer mice can thrive.

UNDERC is the host for the NEON core terrestrial field site in the Domain 5 Great Lakes region (UNDE). Michael's research draws on data from the NEON program as well as from his own sampling efforts. He says, "Working with NEON has been a real pleasure. They have great people working here and a lot of neat stuff going on across the property."

Comparing small mammal data from NEON sampling grids to the data Michael is collecting on his own grids provides a broader view of Peromyscus population dynamics across the entire site. He has been able to use that data to answer questions about where white-footed deer mice are entering the site and how the population is spreading. Based on some of this data, he believes that nearby human-disturbed areas may provide a continual new source of white-footed mice into forest habitats where they may not survive the winters.

Population genetics is the next frontier that Michael would like to tackle. Studying the genomes of different P. leucopus populations will allow him to build a clearer picture of how the population has spread spatially over time. He is also interested in further exploring the interplay between foraging behaviors and predation patterns for both species. Finally, he would like to look at their respective roles as carriers of Lyme disease and other pathogens.

Michael plans to compare small mammal data from UNDERC to other forested habitats in the Eastern U.S., such as Harvard Forest (HARV) in Massachusetts. Comparing data from different NEON field sites will provide insights into the habitat and climate variables that allow the different species of mice to thrive. "What's really great is that NEON collects all kinds of other data that we didn't have access to before. Now we can look at meteorological measurements, vegetation, soil chemistry and other data to see how everything may be interrelated."

What's That Beetle? Ask the Algorithm
May 26, 2021
Looking at the Drivers of Small Mammal Reproductive Phenology
May 19, 2021
Exploring Interrelationships Between Plant Biodiversity, Forest Structure, and Climate
October 18, 2021