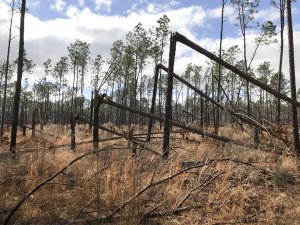 On October 10, 2018, Hurricane Michael slammed into the Florida Panhandle as a category 5 hurricane. With maximum sustained wind speeds of 160 mph (260 km/h), it has been ranked as one of the most intense Atlantic hurricanes to make landfall in the U.S. as measured by pressure.

The Jones Center at Ichauway, located in southern Georgia 128 miles to the northeast of landfall, took a direct hit from Michael several hours later. By this time, Michael had been downgraded to a category 3 on the Saffir-Simpson Hurricane Wind Scale and was rapidly weakening into a mere tropical storm. But with winds still at 100 mph (160 km/h), the storm had a dramatic impact on the longleaf pine ecosystems at The Jones Center.

Jeffery Cannon, a Forest Management Scientist at The Jones Center, is using remote sensing data from the NEON program to understand how longleaf pine forests are impacted by and recover from major weather events. He and his colleagues will use the results to develop tools to help forest managers plan restoration and conservation efforts.

The Legacy of Hurricane Michael at The Jones Center

The Jones Center is home to one of the largest mature longleaf pine and wiregrass ecosystems remaining in the southeast. The 30,000-acre preserve (the host for NEON’s JERC field site) is dedicated to the conservation of this unique ecosystem and development of sustainable forest management practices.

Hurricane Michael left the landscape significantly changed. Jeffery and his colleagues estimate that 15-20% of the total trees across the preserve were downed by hurricane-force winds. After the storm, more than 4500 truckloads of recoverable timber were removed from the site, according to the conservation coordinator at the Jones Center, Brandon Rutledge.

Nearly two years later, the legacy of the hurricane can still be clearly seen by those who know what to look for. While most timber and debris have been removed near roads, thousands of downed trees remain in areas that were not accessible for the logging trucks. There are also splintered tree stumps, “tip-up” mounds where root balls were pulled from the earth, and slash piles of unharvestable wood and brush throughout the less accessible areas of the forest. “In some areas, it’s like a ropes course walking through the tangled downed tree crowns,” Jeffery says. “Legacies of the hurricane will remain in some of these areas for decades to come.”

The hurricane substantially changed the overall structure of the forest, leaving large gaps in the canopy in some places while leaving other areas largely intact. The researchers at The Jones Center are working to understand these structural changes and monitor the recovery of the longleaf pine ecosystem. They also want to answer the critical question: what should forest managers be doing now?

Coastal forests along the Atlantic and Gulf Coasts are subjected to high winds from tropical storms and hurricanes on a fairly frequent basis—on average, across coastal areas, at least once every few years. Usually, forests recover relatively quickly from these disturbances. Large category 4 and 5 hurricanes like Michael, Maria, and Katrina are much less frequent, but they have the power to inflict damage on forest ecosystems that is both more widespread and harder for forests to recover from. Jeffery and his colleagues are looking at the impact of Hurricane Michael on the longleaf pine ecosystem at The Jones Center to answer critical questions about forest resiliency and recovery, such as:

To find answers, Jeffery and his team at The Jones Center are conducting a variety of experiments, some of which involve saturating the ground with irrigation tanks and winching trees over to measure the force it takes to uproot them. They want to model risk factors that determine the wind speed required to uproot a tree, including the size and shape of the tree, the density of leaves in the canopy, how much moisture is in the soil, and topography.

He explains, “We’re using a landscape ecology approach, which looks at the landscape on multiple scales—from individual trees, to forest stands, to entire coastlines. We want to develop tools that will help land managers in an area really predict and manage the consequences of a hurricane and understand the risk factors. For example, maybe some species are more wind resistant than others, or some species do better in wetter or dryer areas or on certain slopes. When we understand these factors, we can make management decisions that improve the resiliency of the forest.”

One of the tools that ecologists at The Jones Center are using to understand the impact of Hurricane Michael is LiDAR (Light Detection and Ranging), a remote sensing system that measures vegetation structure over large areas. The study is part of a larger project (funded by an NSF RAPID grant) led by Greg Starr of the University of Alabama. The project looks at how Hurricane Michael impacted other services that forests provide, such as energy and water exchange.

Jeffery says, “LiDAR is to forest management what an MRI is to healthcare. You can see not just the top canopy but the structure of the vegetation underneath. It gives you tremendous detail over a very large area that would take forever to collect with traditional field techniques.”

The NEON program collects LiDAR data (along with hyperspectral data and high-resolution camera images) using the airborne observation platforms (AOP) at each of the field sites to monitor changes in forest structure and composition over time. Remote sensing data has been collected by NEON at The Jones Center since 2014, providing detailed pre-hurricane data about forest structure. Jeffery is now analyzing the newly available data from 2019 to see the impact the hurricane has left on the forest. He is especially interested in looking at the gaps that the hurricane has left in the forest canopy. The size and pattern of gaps could have a big influence on how the forest recovers. Large gaps create firebreaks that interfere with the natural cycle of surface fires that the longleaf pine depends on. They also leave openings for other species to move in, such as oaks and other hardwoods. If canopy gaps are too large or too numerous, they could have a profound impact on the composition and structure of the forest in future decades. Jeffery’s research into “gap dynamics” will help to illuminate how these gaps influence forest recovery.

The ultimate goal is to develop models that will guide conservation and restoration efforts. The models could also be used for sustainable logging.

Traditionally, the lumber industry has planted trees on large plantations in straight rows for easier harvesting. The trees are cut by machine, often entire rows at a time (e.g., every third row) or in other geometric patterns. Where trees have not been row planted, lumber companies may go into a forest to mark individual trees for harvesting based on their size and location.

However, these methods do not resemble the naturally occurring gap patterns in a forest caused by natural processes like fire, hurricane, and lightning strikes. Jeffery believes that understanding gap dynamics and deliberately mimicking natural disturbance patterns could lead to better forest management, especially in fire-dependent ecosystems like the longleaf pine forests.

The work he is doing at The Jones Center builds on research he conducted as a postdoctoral researcher at the Colorado Forest Restoration Institute (CFRI). While at CFRI, Jeffery developed a software program that analyzes a stem map of a forest (which pinpoints every tree) and makes recommendations for harvesting based on a desired future state defined by forest managers. The algorithm is currently being modified for application by a group in Washington state. For his work at The Jones Center, Jeffery is adapting the algorithm to use the NEON LiDAR data for application in longleaf pine forests.

“These pine ecosystems have incredible value as wildlife habitat and for ecosystem services like water quality and carbon sequestration. They are also a huge economic driver in this part of the country,” Jeffery says. “One of the goals of our lab is to apply science and technology to forestry so we can unite these goals, taking a sustainable harvest out of the forest while preserving the traits that make them so amazing ecologically.” The computer models that Jeffery and his team are building could go a long way towards helping forest managers meet both of these goals.