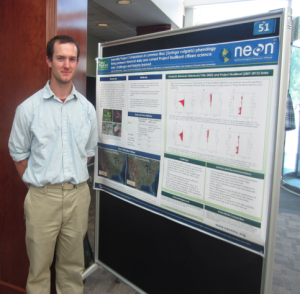 It has been over two years since I was last in the woods of New Hampshire collecting invasive plant data for my undergraduate research. From then to now, I have thought little about data sets or statistical variability. Instead, I have focused on getting thirteen-year-old kids to simply grasp the concept that Earth has seasons due to its tilt and not because of its distance from the sun. I have realized the true frustrations of being an educator in a mixed-ability classroom. I have also experienced the excitement and reward that comes with teaching kids about the wonderful Earth on which we live. This summer, as part of the NEON Internship Program, I came back to thinking about data, but in a much different manner than ever before.

I came to NEON this summer with little experience in the professional science community. The STEM Teacher and Researcher Program (STAR), run by California Polytechnic State University, places current and future K-12 STEM teachers in professional scientific summer internships. The mission of the program is to provide teachers with opportunities to do authentic STEM research and then to help teachers translate this research experience into classroom practice. The program provides various support systems including a weekly workshop with other STAR fellows and master teachers focused on incorporating research topics into classroom lessons – but the heart of the program is to learn how to do research through experience.  My research experience at NEON involved doing analyses of Project BudBurst citizen science data. The STAR program has allowed me to explore scientific professions and observe cutting edge ecological data collection firsthand. NEON has been an excellent fit for encouraging my development in a subject area about which I am passionate: Ecology.

Project BudBurst in the Classroom

I have found that students are more motivated when what they study is applicable and relevant. NEON’s citizen science program, Project BudBurst, provides just such an opportunity. The program creates a way in which students (and the public, by the way) can participate in useful scientific data collection. In addition to learning about and experiencing data collection, students can download Project BudBurst data from the website and track their own observations through National Geographic’s FieldScope program. If this doesn’t excite a teacher, then there is a problem! Given this, I was enthused when I found out that my research project involved using the Project BudBurst data collected from 2008 to the present. Not only was I going to gain a great teaching tool in Project BudBurst, but I was also going to deepen my understanding of the complexities and struggles associated with studying data, and oh, have I struggled.

My primary research objective this summer was to delve into Project BudBurst data and try to find some sort of trend or comparable information from it. After careful consideration, reading about previous work done with citizen science data, and much help from scientists around me, I decided to compare historical lilac flowering data with the Project BudBurst data to see if the date of first flower and first leaf had changed significantly over time. In other words, were lilacs flowering earlier than in the past (something that many people have predicted due to changing environmental conditions)? To answer this question, I just needed to compare Project BudBurst data with observations from an historical dataset.  Initially, this task seemed simple enough, but that was far from the truth. I tried to compare the average dates (day of year) of first flower and first leaf between data sets in specific states that were climatically similar throughout the entire state. Unfortunately, there were not enough observations for this method and I did not know how to account for variables such as microclimates. At this point, I again looked towards other scientists for help. With some great support and advice I moved forward comparing entire data sets. Doing this also came with challenges. The most important challenge was that observations are NOT evenly distributed because the Project BudBurst data were contributed by volunteers around the country. Areas with larger populations (i.e. the Northeastern U.S.) often had more observations than sparsely populated areas (i.e. parts of the West) – but not necessarily because there were more lilacs in one area or another. In addition, the historical data set I was looking at had far more data in the West than in the East. The data I was examining were spatially biased.  I had hoped to use growing degree data to account for climatic differences in different areas, but finding a data set that I could work with proved to be futile for this project. My project changed directions numerous times and I struggled with it. However, this is typical of scientific processes and is a key message to bring back to my students.

I did find that Project BudBurst data showed earlier average first flower dates by about ten days and earlier first leaf dates by about two days when compared with the historical data, but because of the significant spatial difference, these findings are questionable. The next step would be to further examine this data by incorporating other data that may account for spatial differences that would affect lilacs such as precipitation, elevation, humidity, and growing indices. Another approach would be to regionally analyze the data for differences in average first flower and first leaf dates. The point is, in my two months on this project, I simply investigated a question of whether, on average, lilacs were flowering and leafing out earlier in a current data set when compared with historical data. This investigation created numerous questions about the data sets and about the potential differences in observation dates. Can the two data sets be more comparable by considering a growing index? Is there a significant effect on observations dates of the Project BudBurst data due to data mainly coming from urban areas? Many more questions were created from this process and need to be considered for more complete research. I discovered how difficult it is to create a strong research question and to investigate it. Even the process of presenting research is an art that I found to be more difficult than first perceived.

I can now teach students the real process of scientific investigations. As questions are asked and investigated, more questions are created. It is a continual process; it is rare there is a simple answer that "proves" a hypothesis. Students can find (just as I did) that when there is an apparent dead-end or a rejection to a hypothesis there is a still much to be learned. This realization can give insight into further investigations of new questions. Much of education puts students in the mindset of trying to solve problems with one answer (standardized testing!). The true job of science educators should be to get kids to realize that we live in a complex world where there are often numerous variables affecting what is being studied. This means there are always going to be more questions to ask and potentially more answers to reveal. We should be getting kids to want to discover, which means getting them to continually ask questions and to understand that questions are good and essential to scientific discovery.

NEON is a Model for Citizens and Students

The relevance of NEON and Project BudBurst to my classroom is astounding. At NEON, ecologists, computer scientists, accountants, educators, writers, and even safety specialists are working together towards a common goal. This fact is often lost in the classroom; scientific endeavors require many types of disciplines and thinking in order to succeed. Project BudBurst takes this lesson a step further and asks citizens to contribute to better understanding of the world in which we live. Students across all grade levels will appreciate this, whether it is through a lesson focused on Project BudBurst data or a simple discussion about NEON.  The lessons I have learned will help my students become a bit more scientifically literate. A few of those inspired students will even move on to be future NEON data users.

This is the final post in a series written by our 2014 summer interns reflecting on their experiences at NEON.