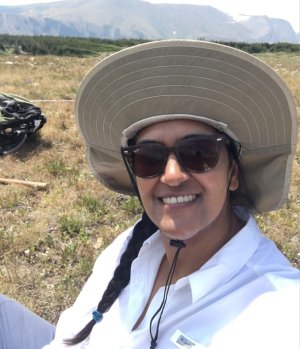 Though academia has improved the representation of women and people of color, professorial ranks remain largely unrepresentative of our nation's diverse population. We spoke with Dr. Bala Chaudhary, assistant professor of Environmental Science and Studies at DePaul University, about how ecology can become a more diverse and inclusive area of study.

Chaudhary told us how her mentors helped to shape the type of ecologist she wanted to be and about the type of environment she wants to foster in her labs. She discussed how the lack of representation of people of color – both while she was in school and in her professional career – drives her to work toward creating a more equitable academic system, and she shared insightful ways that universities and labs can improve. As the Women in Ecology series continues, a common theme around the need for equitable representation and inclusion has emerged.

Q: Can you explain a little bit about what you study?

I study plant-fungal mycorrhizal ecology. I've always been interested in large scale questions and the landscape ecology of microbes because that information informs the management of these important plant symbionts. I enjoy questions that can inform our management of mycorrhizal fungi to improve biodiversity and restoration. NEON, for example, enables that work by facilitating the study of mycorrhizal fungal ecology at large spatial scales in ways that would be very difficult to do on my own.

Q: What steps led you down the career path you followed?

I was always interested in science, so in college, as a work-study student, I got a job working in a molecular biomedical lab, but it wasn't right for me. I was a biology major and was pressured to be pre-med, but was always choosing ecological electives. Then I took a class called "Mutualisms and Symbiosis," taught by Dr. Greg Mueller at the Field Museum in Chicago and learned about symbioses and mycorrhizae. It piqued my interest. The teaching assistant in that class advertised that her lab was hiring for summer field assistants on a mycorrhizal ecology project, and I was so excited at the prospect of doing field work over the summer, not to mention being paid to stay in Chicago for the summer.

After college, I worked as a lab technician for a year and then as a restoration consultant in southern California for about four years. In that work, we were mainly focused on plants and animals, and I kept thinking back to the soil. I always would wonder, "what are the fungal symbionts doing, how are soil microbes impacting the success of our restoration projects?" I realized this is what I think about the most and it's what I should continue to work on. So, I went to graduate school to specifically study mycorrhizal fungal community ecology, and at the time that narrowed it down to about three labs in North America.

Q: Regarding your work as a restoration consultant, what were you restoring the ecosystem from?

We focused on drastically disturbed sites in primarily urban environments: environmental mitigation, landfill revegetation, roadcut revegetation, and habitat restoration for endangered species. We were also involved in a dust mitigation project using natural systems to minimize dust that is harmful to human health.

Q: Who were some of your most important influences or mentors in ecological science?

I've had three major mentors in my career. The first was as an undergraduate student. I worked in the lab of Dr. Jim Bever and Dr. Peggy Schultz who are excellent mycorrhizal ecologists researching plant feedback interactions. They were the first scientists that really made me think that I had what it took to be a scientist. They cultivated an incredibly supportive lab group that really made me feel welcome. And they were the first ones who showed me that really smart people can also be really, really nice!

My second mentor was Dr. Margot Griswold, who was the principal for the environmental consulting firm I worked for. She was hugely knowledgeable in restoration, conservation practice and policy, and just a powerful environmental changemaker. I worked for her, but I would really call it an apprenticeship, because I learned so much from her every day. Those were formative years that helped me understand what research I needed to do to inform practice.

The last important mentor was my PhD advisor, Dr. Nancy Johnson. She was my graduate school advisor for many years and provided excellent training for becoming an independent ecologist.

Q: What impact do you think having multiple female mentors has had on your career?

Having female mentors definitely helped me on my path, but it was no accident. After my early undergraduate experiences, having multiple meaningful women who were mentors, I knew that this was the space I wanted to be in. I also entered graduate school married and knowing that I wanted to have children, and so choosing to apply and work with Dr. Nancy Johnson was not an accident, because she was very open about her kids and work/life balance. She had prior lab members who had children in her lab, so it was purposeful that I and many other early careers scientists chose to be in her lab.

Q: How has your experience been as a woman of color in a STEM field?

I have had many women mentors and supporters, but as a woman of color— I'm South Asian— I've never had a mentor who is a person of color. And of course, I'm a woman, but my identity has multiple dimensions and is intersectional, and so having a lack of representation of people of color in my field is a big barrier. You have to continually code switch, you have to continually decide what facets of your identity you share with others. People make a lot of assumptions because of the way I dress and the way I speak about my proximity to whiteness, and they're often false, and so you face microaggressions that probably wouldn't happen if there was more representation of people of color in our field.

Q: What do you think can be done to get more students of color interested in ecology?

This is an active area of research in my labs. We do ecological biophysical research, but we're also engaged in work to examine what barriers exist for students of color in our field at various stages.

For several years now I've been doing focus groups with students of color and working with a social scientist, Dr. Tania Schussler, to try and investigate what some of those barriers are, what things lead to exclusion, what things lead to inclusion, and how we can promote that feeling of belonging. Several themes have emerged. One is that, generally, students of color get into the field because of a desire to improve social and ecological well-being in their communities. I think sometimes the thought is, "let's get students of color to Yellowstone and let's get them hiking and camping," instead of an approach to meet them where their interests are — this might mean they're interested in improving access to transit in their communities or access to green space.

Instead of bringing students of color in, it's often more challenging to retain students. With young students, K-12 kids, there's so much interest and excitement around ecology and environmental science. And especially now, there's so much interest among the youth with climate activism as well. You don't really need to recruit; we just need to hold on to people of color by promoting, paying, and elevating at equal levels.

Q: What work are you most proud of in your career?

On the ecological research side, the work I'm the proudest of at this point is efforts I've been involved in to conduct global meta-analyses of mycorrhizal functioning. Over 15 years ago, I was part of a working group where we came together to synthesize global research on mycorrhizal function and try to identify the ecological context in which mycorrhizal symbioses are mutualistic, parasitic, or neither. I was a graduate student; I was kind of a meta-analyzer before I knew what meta-analysis was. I wanted to synthesize and pull together existing information, so being a part of that group got me deep into the weeds of meta-analysis.

The other thing I'm most proud of is an effort I started this past year, early on in 2020, which is an online community called Women of Color in EEB. The point was to build an online community that can share positivity, bounce ideas off of each other, and build mentoring and scientific networks for women of color. When you experience racism, or if there's social or racial unrest in your community, you don't always feel like you can talk about it in your department or your lab. Having a sounding board can be really meaningful, and it can be the decisive factor between staying in or leaving the field.

We have daily conversations, support, and commiseration, and I'm really proud I was able to start this and connect almost 300 women of color in our field. I'm proud there's a place people can go to talk about this stuff. It helps to talk about academia with other academics. There's a grad student channel, a lot of post-doc chatter, and undergrads getting ideas and job sharing. It's a really positive space for folks to connect.

Q: Where do you hope your research goes in the future?

In my field, we struggle with a lot of basic things. For example, identifying mycorrhizal fungal species in soils in situ. We're limited with respect to the molecular tools that we have right now. They're much better than they were before, and they're getting cheaper every day, but the methodology is limited by the technology. We also still struggle with some basic questions like "are the organisms that we're studying alive?" That's just a really basic problem. We extract organisms from the soil, and we look, and we classify, we pull out DNA, but is anything that we're looking at actually alive, physiologically active, or making some effect on plants? That's really difficult to quantify and study. In the future, hopefully there will be a better way to study mycorrhizal functioning in the field.

That said, the NEON work is incredibly exciting, so the future of work for me is thinking about how we can best utilize NEON data and linking across groups. I'm a fungal person, a soil person, but recently we had a fabulous meeting of minds of all groups working on different aspects of NEON. That's really what I see as the frontier of our research: working with other scientists to cut across organismal boundaries and spatial and temporal scales.