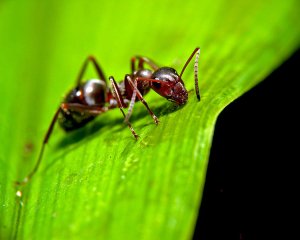 Battelle field technicians sample ground beetles at NEON terrestrial field sites by using pitfall traps, small containers sunk flush into the ground to capture insects and other arthropods. The traps collect a wide range of arthropod taxa and are useful for measuring arthropod abundance and movement data in an area. While our technicians focus on identifying ground beetles in pitfall samples, the traps also collect large numbers of many common non-ground beetle arthropods (termed bycatch) that are archived and available to researchers for additional analyses.

Dr. Michael D. Weiser and Dr. Michael Kaspari from the University of Oklahoma, Department of Biology, saw a creative opportunity to leverage the NEON program by using archived bycatch collected at NEON field sites to enhance their research of ant communities. After receiving funding for an NSF NEON-EAGER grant project in late 2015, the self-named NEONAnts team began their fieldwork in May 2016, on “20-year dynamics of North American ant communities: Evaluating the role of climate and biogeochemistry on ecological change."

The project will study ants from NEON terrestrial field sites and aims to create baseline models of how climate impacts seasonal patterns of ant abundance, activity and diversity. These baseline models will help determine parameters for predictive models of future ant abundance and diversity. Many ant species’ thermal traits will be measured, shedding insight into the minimum and maximum temperatures at which point ants can perform work.

Why study ants? Ants are nearly ubiquitous in terrestrial ecosystems. From above tree line in the Rocky Mountains to tree canopies in the lowland Amazon, more than 13,000 known species of ants can be found deep in the soil. It has been estimated that there are 10,000,000,000,000,000 (10 quadrillion) ants alive at any given moment. As ants can be 15%-25% of the animal biomass in an ecosystem, they are also ecologically important as both predators and prey. Ant diets are diverse; they can be predators, scavengers, granivores, herbivores and fungivores. They perform important ecosystem functions, including turning more soil than earthworms, dispersing seeds, and preying on pest insects. Leaf-cutting ants harvest up to 15% of live vegetation in Neotropical forests and grasslands.

In order to measure ant abundance, activity and diversity across biogeographic scales, Weiser and Kaspari’s team is collecting and analyzing the ants collected in NEON beetle pitfall traps at select field sites and comparing these data to data collected in the 1990s. The project started in earnest last summer when Mike Weiser and a crew of three graduate students and two undergraduates drove 12,000 miles throughout the western United States with stops at 12 field sites in seven states (NM, AZ, NV, OR, UT, CO, NC).

The sites were selected based on existing ant data that were sampled in the mid-1990s. Last summer, they  resampled 20 of the 49 transects collected from 1995-1996, and measured thermal traits for 60 species of ants from 25 genera. According to Mike, “In the mid-1990s, we used standardized methods to sample 49 ant assemblages from lowland tropical forests in Peru to alpine tundra in Colorado. Many of the places that we sampled have become NEON terrestrial research sites (e.g., Harvard Forest, Niwot Ridge, Central Plains Experimental Range, Jornada). As part of the NEON-EAGER we are resampling these sites to compare snapshots of how ant communities have changed over the last 20 years. We are getting the ants taken from the by-catch of the pitfall traps used to collect the NEON sentinel taxa carabid beetles. We are identifying the ants to species and counting them to get activity densities (the number of each species that falls in the trap over a given time). We will use these data to understand the seasonal and annual patterns of ant activity.” Last summer, they measured critical thermal limits for 87 ant species from 30 genera (roughly 10% of the species and just under 40% of the genera in the continental US).

This summer, the NEONAnts team is continuing their efforts by focusing on collecting transects in the eastern US ( MO, AL, FL, VA and MA), as well as the desert southwest (AZ and CA). They’ll collect until late August, then spend the fall identifying the 2017 collections and getting chemistry data for the soils and ants. Analyses and manuscript writing will start in spring. The project was funded for two years, and is scheduled to end May 2018.

It’s grueling work, but they manage to have fun. In fact, they’ve named the four-wheel drive truck they use, “Truckee MacTruckface.” If you’d like to follow along with the crew and learn about project updates, follow @NEONAnts and @TruckeeMacTFace on Twitter.